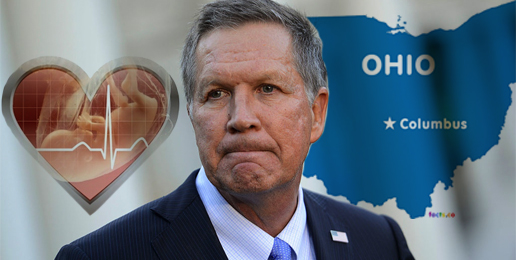 The heartbeat is present at around 3 weeks and 3 days, but usually can’t be detected until 4 to 6 weeks.  The bill also provides an exception to allow an abortion when it is necessary to save the mother’s life.

If Governor Kasich doesn’t veto the bill by December 16th, it automatically becomes law.  He also has the option to veto a portion of the bill (line-item veto).  The state legislature could override a potential veto, but that requires a three-fifths vote.  They are likely to override it in the Ohio Senate since the original vote was 21 to 10, but it’s less likely to be overridden in the Ohio House since that vote was 56 to 39.

Take ACTION:  Call Gov. Kasich’s office at (614) 466-3555 to leave a message encouraging this one time presidential candidate to stand for the right to life and sign the “Heartbeat Bill” into law.  You can also click HERE to send a message to Gov. Kasich via his website.

The ACLU has already threatened to sue the state of Ohio if this bill becomes law.  It’s very likely that the lower courts will find it unconstitutional because of Roe v Wade and subsequent cases.  Tragically, the current U.S. Supreme Court would agree and  Ohio would be forced to pay the legal fees of the attorneys that sued.  If Ohio tried to ignore the U.S. Supreme Court and enforce the heartbeat bill anyway, the Federal Government would force the state to comply.

Ultimately, the real problem is the current U.S. Supreme Court.

These Justices hide behind stare decisis (upholding prior decisions), dubious interpretative approaches including substantive due process and what they call looking to the shadows of the U.S. Constitution. However, prior decisions have been changed numerous times and because they are so controversial, they harm the U.S. Supreme Court by politicizing the nomination and confirmation processes.  Meanwhile, it’s well established that no provision of the U.S. Constitution was ever adopted or ratified with the intention of creating a legal “right to abortion” nor were they adopted or ratified with the intent to prohibit the people from protecting the unborn from abortion.

The three oldest Justices are pro-choice.  They are Ginsberg, Kennedy, and Breyer.  If one of them leaves the U.S. Supreme Court and that position is filled with a pro-life Justice, we could see Roe overturned in our lifetime.  Bills like this one in Ohio that protect babies with detectable heartbeats can finally be a reality.  It will be a true victory for the value of human life and for our democratic process.

Pro-lifers are hopeful that Gov. Kasich will sign this “Heartbeat Bill” into law.  It’s the right thing to do.  Meanwhile, another bill is available for him to sign that protects the unborn from abortion after 20 weeks.