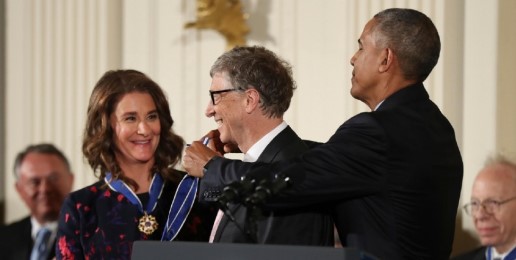 The Gates were just a couple of the two dozen award recipients who the president honored last week. By awarding the founders of the Bill and Melinda Gates Foundation – which has reportedly been instrumental in population control though its vaccines that have worked to sterilize multitudes of African women – the Obama administration is sending the message that working toward the elimination of preborn children is a noble cause.

Pro-abortion advocates and other critics contend that the Microsoft founder and his wife – with their devotion to promote and move the abortion movement forward – do not benefit society by eliminating innocent preborn children.

According to the official language used to describe the award, the Presidential Medal of Freedom is “presented to individuals who have made especially meritorious contributions to the security or national interests of the United States, to world peace, or to cultural or other significant public or private endeavors.”

With Obama being a devout advocate of Planned Parenthood and its federal funding, many are not surprised by his adulation of the Gates.

When introducing Bill and Melinda Gates, Obama gave them lofty accolades for their foundation’s humanitarian work in medicine – without mentioning its pro-abortion advocacy.

“For two decades, the Gates Foundation has worked to provide lifesaving medical care to millions – boosting clean water supplies, improving education for our children, rallying aggressive international action on climate change, cutting childhood mortality in half,” Obama announced. “The list could go on.”

It is reported that the Gates Foundation plays an integral part in funding abortions on numerous continents around the world.

“Much of this giving is focused on Africa, Asia and Latin America, where abortion-providers like Planned Parenthood, Marie Stopes, and Ipas seek to overturn pro-life laws and sometimes even provide illicit abortion drugs,” Life News reports.

The Gates, the media and the Obama administration have done a phenomenal job touting the Gates Foundation’s work to preserve life and hide the fact that it has spent untold millions to destroy it.

“While Gates Foundation funds cannot be earmarked for abortion, the fungibility of money makes it easier for these organizations to provide abortion internationally,” Life News’ Steven Ertelt explained. “In other words, every dollar the Gates Foundation gives to Planned Parenthood for distributing birth control or building an abortion-friendly clinic frees up a dollar in Planned Parenthood’s budget to spend elsewhere.”

Furthermore, the billionaire’s wife has been witnessed on numerous occasions forwarding the culture of death.

“In 2012, Melinda Gates was criticized for promoting abortion and population control at an international meeting,” Ertelt pointed out. “The same year, she was criticized for hosting a Family Planning Summit in London with two of the biggest pro-abortion groups in the world – the U.N. Population Fund and International Planned Parenthood Federation.”

The foundation’s willingness to step in with funding when the abortion industry is lacking is also noted.

“More recently, the Gates Foundation is funneling more money into global programs promoting population control and abortion after a group warned that international family planning goals are not being met,” Ertelt added.

In the name of “women’s reproductive rights,” the foundation based in the Seattle area pledged to give millions more toward abortion.

“[The Foundation promised an additional $120 million to Family Planning 2020 programs that support] the rights of women and girls to decide when and how many children they want to have,” the news website All Africa reported last year.

The pro-abortion initiative’s press release announced that two of the largest abortion businesses in the world – Planned Parenthood and Marie Stopes International – are partners in the global Family Planning 2020 project.