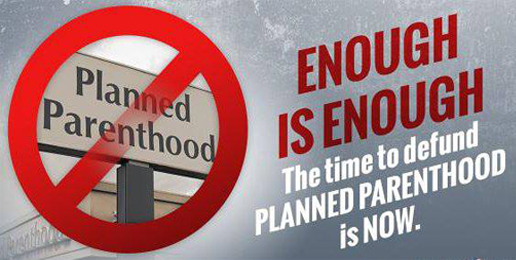 Earlier this year, the U.S. House of Representatives supported the $1.3 trillion dollar “omnibus” budget bill which included hundreds of millions of dollars for Planned Parenthood.

Yes, federal lawmakers continue to fund what Daniel John Sobieski described in an op/ed as the Planned Parenthood “Chop Shop”–a business that is currently under investigation by the Department of Justice for “engaging in the illegal sale of aborted baby remains for profit.” According to Planned Parenthood, “the more fully-formed the baby body parts, the more valuable those parts are.”

The same writer noted the irony that funding to fight the opioid addiction epidemic was also in the bill. This means “the government is simultaneously paying for the saving and destruction of human life.”

Sobieski’s devastating critique is worth repeating:

Defunding Planned Parenthood is something more than a campaign promise. Life is supposed to be the first unalienable right conferred on us by our Creator. Liberals are also supposed to be in favor of “safe spaces.” One would think the womb should be the safest space of all. It is not so considered on K Street.

While opiod overdoses killed about 64,000 people last year, the “leading cause of death for Americans under 50 years old is abortion, the single largest practitioner of which is Planned Parenthood.”

Yet far too many “pro-life” members of Congress voted to fund what is “by far the nation’s largest abortion provider.”  God forgive us!

Here is another morally repugnant fact that should sear the consciences of all decent people: “An analysis of the 2016-2017 report along with Planned Parenthood’s previous reports shows that Planned Parenthood is responsible for the deaths of over 7.6 million human babies.”

Congress will have another chance to defund the barbaric, feticidal Planned Parenthood in September. Pro-life voters must make their voices heard before Congress returns to Washington D.C. after Labor Day.

Take ACTION: Click HERE to send an email to your U.S. Representative to urge him/her to reject any spending bill that includes tax funds for Planned Parenthood. Neither taxpayers nor their elected representatives should be complicit in the intentional killing of innocent humans in the womb.

You can also call the Capitol switchboard at (202) 224-3121 and ask to be transferred to your Congressman’s office to leave a message.

Planned Parenthood receives roughly $500 million in taxpayer dollars each year. Roughly 86 percent of these funds are provided through Medicaid reimbursements. The remaining 14 percent is provided through Title X family planning grants. All of this money is authorized by Congress.

Please pray that thousands of emails and calls will flood in to the U.S. Capitol and that our political leaders in Washington D.C. will respond in the affirmative.  It is long past time to defund Planned Parenthood.

Please also take time to pray for the upcoming elections as well as for the spiritual and moral healing of our nation.

‘Net Neutrality’ in Illinois: Just One More Leftist Act of Deception
b
a
x
r