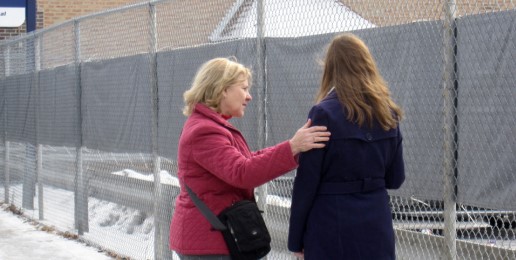 Thousands of children are alive today because pro-life sidewalk counselors stand outside abortion clinics offering encouragement and information about the abortion alternatives to pregnant mothers. It is one of the most effective ways to save the unborn. New legislation, however, threatens this vital work. Chicago state lawmakers have introduced HB 3735 which would essentially create a censorship zone around abortion clinics.

Using subjective and broad language, the bill says counselors who are convicted of “intimidation” against pregnant mothers and staff members entering the abortion clinic, will be subject to longer prison stays and/or fines. Sponsored by State Representatives Deb Conroy (D-Villa Park), Silvana Tabares (D-Chicago), Greg Harris (D-Chicago), and John D’Amico (D-Chicago), HB 3735 adds acts of intimidation and violence in the vicinity of abortion clinics to the list of aggravating factors in the criminal code. An aggravating factor is a fact or circumstance that increases the severity or culpability of the criminal act. If this bill were to pass, people accused of intimidation will receive harsher sentences simply because they were near an abortion clinic.

This bill is problematic in several ways.

First, the crimes of harassment and violent actions which the bill claims to prevent are already covered under the criminal code. Creating a special zone for harsher penalties around abortion clinics is clearly meant to intimidate pro-life sidewalk counselors.

Second, this bill seeks to solve a problem that does not exist. There is no evidence that people are being harassed while walking into abortion clinics by sidewalk counselors or anyone else.

Third, the bill raises multiple free speech issues. The U.S. Supreme Court has already held in McCullen v. Coakley that buffer zones preventing sidewalk counselors from coming near an abortion clinic entrance unconstitutionally restrict free speech. It is unclear whether HB 3537 is broad enough to protect the free speech rights of those sidewalk counselors. This bill may also be unconstitutionally aimed to restrict pro-life speech over other forms of speech.

Finally, the bill specifically mentions abortion clinic staff members as receiving this special protection. One can easily foresee abortion clinic staff using such a law to intimidate and silence pro-life counselors and to justify reporting them to the police when no harassment or violent actions have been perpetrated.

Take ACTION: Click HERE to contact your state representative to tell him or her that HB 3735 is unnecessary and jeopardizes both free speech and the lifesaving work of sidewalk counseling. Then politely urge your representative to vote NO on HB 3735.