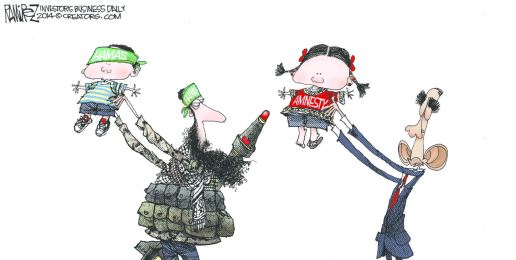 The vicious character of Hamas is finally becoming apparent to the world as we all witness them using women and children as shields for their weapons.  This same evil tactic was seen in the Iran-Iraq war and Golda Meir noted of Israel’s opponents in its formative years, “we can forgive them for killing our children, but we can never forgive them for making us kill their children.”

For too long many in the Media have been complicit in covering up the sick reality that Hamas and others in that part of the world are very willing to send children to their deaths in order to shield themselves and their weaponry while portraying Israel as immoral and heartless.  In reality, Israel has had no choice.  If they spared the children shield, they would be overrun.

Has no one noticed that American liberals have been using the same strategy for decades and are now blatantly doing so again with the crisis at the border?  Sadly, the Media are again complicit in the deception.  Just as all Americans recoil at the thought of killing children in war, we are moved by these children’s suffering.  To the casual observer it appears that conservatives are cruel to children because we oppose many of the programs Democrats promote.  However, just as Hamas has been advancing its evil agenda behind a shield of children, so liberals have been steadily advancing their destructive, socialistic objectives behind a shield of children!  Make no mistake: while the liberal agenda does not place children directly in the path of tanks and rifle fire, it is none-the-less destructive to their well-being.  Note the danger they face daily in America’s inner cities where the liberal anti-family agenda has taken root, to say nothing of the fifty million plus unborn killed in the womb!  And multi-generational welfare dependency is immoral, humiliating and soul-destroying.

So long as the only message heard is that conservatives are heartless because we won’t do this or that for the children, we will lose these battles.  Liberals force us to “go through” the children in order to get at their bad programs.  We must focus attention on the sordid character of those who are willing to expose children to horrific dangers in order to further their socialistic political agenda.  It is disgusting to me that liberals are using conservatives’ and other Americans’ kind hearts against us and are not being called on it.  How cynical to on the one hand accuse us of heartlessness while at the same time KNOWING we will be reticent to simply oppose or dismantle their programs once they’re established for fear of hurting the children involved!  Yet, many of these programs, while appearing superficially to be beneficial, on a long-term basis will bring suffering and even death to children!

How ironic that America, the greatest and safest place on earth for children is being systematically destroyed from within to a large degree by the same strategy Hamas and other terrorist groups world-wide have used: children as shields!

It’s time we woke up!