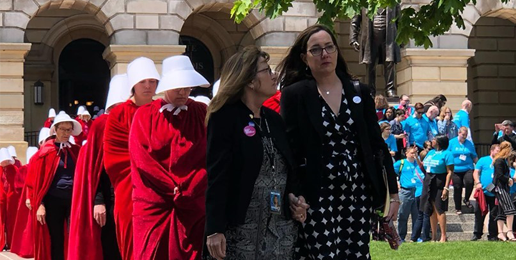 In a “Voice of the People” letter appearing in Sunday’s Chicago Tribune, JoAnn Lee Frank of Clearwater, Florida says the following:

The bill passed in Alabama banning nearly all abortions smacks of contempt and misogynistic views toward women. Why else would so many white Republican male legislators willfully rule that women carry a fetus to full term in cases of rape and incest? Even if it is their religious belief, it has no business influencing the law. The attitude of the lawmakers is not only cruel and unjust, it’s also sick and destructive. This stunning decision violates the constitutional protections guaranteed by Roe v. Wade.

How does opposition to human slaughter—including the slaughter of about 440,000 female humans annually—constitute “contempt and misogynistic views toward women”? And are the 36% of women who oppose abortion in “all or most cases” as revealed in a Pew Forum poll guilty of contempt for women and misogyny?

Frank asked why “so many white Republican male legislators willfully rule that women carry a fetus to full term in cases of rape or incest.” That’s an easy-peasy question to answer.

First, the voters in Alabama—including female voters—elected “so many white Republican male legislators.” Perhaps Alabama voters don’t discriminate based on race, skin color, or sex as Frank and so many other “progressives” do. Perhaps they judge candidates for public office by the content of their character rather than the color of their skin or their unchosen biological sex. One presumes that these white Republican male legislators are carrying out the will of their constituents, including their diversely hued female constituents.

The decision of those lawmakers to protect the lives of humans in the womb is neither cruel, unjust, sick, nor destructive. It is the attitudes of people like Frank who have no regard for the dignity, worth, and rights of incipient human lives and who perversely call the slaughter of humans in the womb “health care” that are cruel, unjust, sick, and destructive—attitudes that result in the literal destruction of a human life.

Word to Frank: The Constitution says not one word about abortion. The Declaration of Independence does, however, say this: “We hold these truths to be self-evident, that all men are created equal, that they are endowed by their Creator with certain unalienable Rights, that among these are Life, Liberty and the pursuit of Happiness.”

How does one determine whether a law is just or unjust? A just law is a man made code that squares with the moral law or the law of God.

To “progressives,” the idea of a separation of church and state no longer points to the importance of protecting religious freedom from the intrusive power of the state but instead refers to coercively eradicating religious expression from the public square. Only secular worldviews, which are shaped by myopic, dogmatic, unproved assumptions, will be tolerated—you know, the kind of assumptions that secularists argue religious worldviews represent.

Such a distortion of the idea of a separation of church and state poses a danger not just to people of faith but to the welfare of the nation. Can anyone look honestly at the state of the culture and reasonably argue that American society has benefited from six decades of divestment of religious influence from the culture?

People from diverse faith traditions and no faith could all arrive at the same position on a particular public policy. For example, although Orthodox Jews, Muslims, Catholics, Baptists, and atheists may all oppose abortion because they value human life, the reasons for that valuation of life differ.

If there is a secular purpose for the law (e.g., to protect incipient human life), then voting for it does not violate the Establishment Clause of the First Amendment. The source of the various parties’ desires to protect incipient life is no business of the government. It would be not only absurd but also unethical for the government to try to ascertain the motives and beliefs behind anyone’s opposition to abortion and equally unethical for the government to assert that only those who have no religious faith may vote to oppose abortion. Such an assertion would most assuredly violate the Free Exercise Clause of the First Amendment.

Moreover, lawmaking absent an understanding that there exist moral truths that are objective and universal would represent an illegitimate and hubristic arrogation of power. Acknowledging that there is objective truth regarding what is right and wrong and that it is universal and knowable is essential to democratic institutions. What sense does outrage at human rights violations make if we assert there are no universal, transcendent, eternal, objective truths? And if we agree that these truths exist, that they transcend the subjective opinions of any particular individual, then what is their source other than a supernatural, eternal, transcendent being?

I guess JoAnn Lee Frank believes the exercise of raw governmental power and control over the lives of its citizens absent any acknowledgment of objective moral truth is a good thing. Others tremble at such an idea.

Like Leftists around the country, Leftists in Springfield are apoplectic that pro-life Americans are finally making some real progress in protecting babies in the womb. Rumors are circulating that anti-life lawmakers in Springfield are gearing up to push their bills very soon. Please speak out now against their efforts to make human slaughter even easier in Illinois.