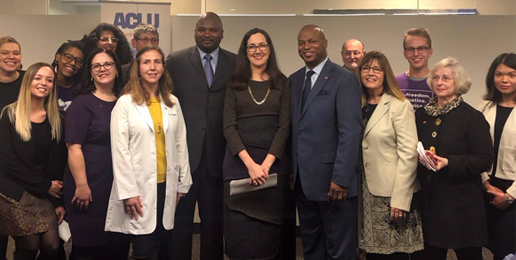 To fulfill Governor J.B. Pritzker’s dream to make Illinois a slaughterhouse extraordinaire and the abortion mecca of the Midwest, that ever-reliable instigator of moral mayhem, State Representative Kelly Cassidy (D-Chicago), has sponsored a bill that would put a twinkle in the eye of Kermit Gosnell. The absurdly named Reproductive Health Act—or as I call it, the Baby Butchery Bill, which has little to do with reproducing and nothing to do with health—was introduced in the Illinois House by Cassidy and now has 40 accomplices. Two days later Melinda Bush (D-Grayslake) introduced it in the Illinois Senate. She now has 4 accomplices.

For those unfamiliar with Cassidy, she’s a lesbian whose “spouse” is Newt Gingrich’s half-sister, “genderqueer” Candace Gingrich, an instigator of moral mayhem herself. She’s a leftist ideologue and Associate Director of the Youth and Campus Engagement Program of the Human Rights Campaign who refers to herself by plural pronouns. Cassidy, obsessed with using government resources to promote deviant sexuality, supports all sorts of lousy body-, soul-, family-, and culture-destroying legislation.

According to constitutional attorney Paul Linton, Cassidy’s nightmarish 120-page bill (HB 2495) will increase the numbers of weak, vulnerable humans who will have their bodies destroyed by adults who ironically claim to worship bodily autonomy. Here are some of the things Cassidy’s Baby Butchery Bill will do according to Linton:

When it comes to the legalized slaughter of inconvenient or imperfect babies in their 6th through 9th month of life in the womb, eager Baby Butchery-Choice advocates like Cassidy and her 40 accomplices prefer to focus on percentages rather than numbers. They will exploit whatever tactic may help conceal the unmitigated evil of abortion. Instead of percentages, let’s look at numbers to help expose the truth.

Imagine the caterwauling of Leftists if, over the past 45 years, 793,000 guilty death row inmates had been executed and had been executed by having scissors inserted in the back of their skulls, their brains scrambled, and skulls crushed; or had their bodies torn into pieces; or had their hearts stopped via an injection of potassium chloride, all of which are done to babies after 21 weeks of gestation.

It’s important to note that the government does not permit the administration of potassium chloride to criminals guilty of heinous crimes without first administering powerful sedatives because, as pharmacologist and toxicologist David Kroll explains in Forbes Magazine, “If given alone without the other drugs, the high concentration of potassium chloride would be terribly painful, akin to fire or electricity coursing through the veins.”

It’s important to note also that experts say that by 20 weeks gestation or earlier, babies can experience pain and that fetal surgeons administer anesthesia and analgesics (i.e., painkillers) to unborn babies undergoing surgery.

Leftists relentlessly defend abortion by asserting that pregnant women have the absolute right to make decisions concerning their bodies. This, of course, requires proof that abortion involves only the bodies of pregnant women—a patently false, science-denying claim. If abortion really involves only one body and the owner of that body is entitled to do with it as she pleases, then shouldn’t “progressives” defend the moral right of women to take Accutane or drink alcohol throughout their pregnancies? Is it coherent to argue that while a woman has a right to kill the purportedly non-existent body within her body, she is ethically obligated not to ingest anything that would “harm” the purportedly non-existent body within her body? Either her bodily autonomy rights are absolute or they’re not. Either there are two bodies or there aren’t.

As science continues to prove the falsity of their claims, Baby Butchery-Choice advocates are being forced to move away from hard science for the foundation of their arguments and move into metaphysics. Now, they argue that, sure, the product of conception between two humans is a human, but it’s not a person with rights until…

Yeah, we’re all waiting on pins and needles for morally-compromised metaphysician Cassidy et al to explain that. Is the product of conception a person with rights when she can feel pain? Breathe on her own? Show evidence of self-awareness? Are her rights dependent on her anatomical wholeness, her physiological health, or on how others feel about her? Are her rights dependent on her cost to others? Shouldn’t Cassidy and her colluders answer these questions before they make Baby Butchery even easier?

Already, Illinois permits abortion through all nine months if a doctor concludes that a woman’s “health” is jeopardized by the continuation of a pregnancy, with “health” defined so elastically as to include virtually any reason. But that’s not enough for the self-centered and amoral among us. Everyone with the capacity to think through the logical implications of an argument knows where we’re headed. If late-term abortions of babies—not fetuses—are ethically justified by the presence of physical anomalies, terminal conditions, the emotional state of their mothers, or their mothers’ fiscal concerns, why aren’t post-natal abortions (i.e., infanticide) of newborns or week-old or month-old babies justified by those same factors?