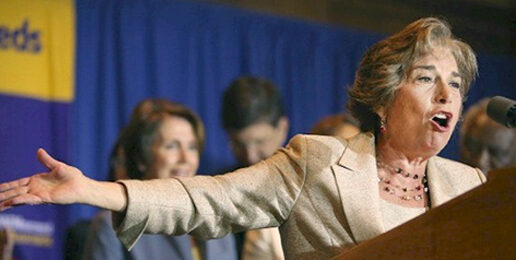 Jan Schakowsky, the U.S. Representative from Evanston, Illinois, diminutive in intellectual and moral stature, has sponsored a bill to repeal the Helms Act. Her bill, H.R.1670, is titled “Abortion is Health Care Everywhere Act,” and if passed, would open the floodgates of American money to fund abortions overseas.

According to the liberal Guttmacher Institute, the repeal of the Helms Act will result in Americans funding the slaughter of 19 million babies every year, mostly black and brown babies. And Schakowsky has the audacity of a lifelong politician whose conscience has shriveled up to call the Helms Amendment “racist.”  Just think about that: a privileged white woman is calling her bill that will fund the slaughter of 19 million black and brown babies every year an anti-racist bill.

Schakowsky and her collaborators emphasize the health risks for mothers in third world countries, which we know is just a sham. We already know the health of humans doesn’t concern them because the sponsors of this bill support abortion through all nine months of pregnancy for any or no reason.

Moreover, the ethical solution to maternal mortality risks, or the general health risks that accompany life in third world countries, or poverty is not a grotesque proposal to fund the slaughter of humans while in the womb. Word to Schakowsky, even poor people are created in the image and likeness of God and have a right to live—including poor black and brown people.

In 2015, Schakowsky exposed her intellectual and moral deficits–again–saying,

There’s nothing very pretty about any kind of medical procedure. Frankly, a conversation about exactly what happened in heart surgery would probably make people squeamish as well.

Schakowsky is the second wife to her second husband, Robert (Bob) Creamer, a Saul Alinsky-trained community organizer, which should tell you everything you need to know about their ability to create communities conducive to human flourishing.

Creamer served time in prison for tax violations and bank fraud committed when he ran the Illinois Public Action Fund on whose board sat Jan Schakowsky. During his trial, other shady Illinois characters sent letters of support for Creamer, including the morally vacuous Dick Durbin, racism profiteer “Rev.” Jesse Jackson, and Barack Obama’s accomplice David Axelrod.

More recently Creamer was the subject of a Project Veritas exposé that revealed his involvement in Clinton campaign/DNC-coordinated schemes to sabotage the 2016 presidential election by hiring people—including mentally ill and homeless people—to agitate at Trump rallies in order to elicit reactions that the press could use to criticize Trump.

If the wealthy Schakowsky wants to kill black and brown babies in foreign countries, she, her corrupt husband, and their political cronies should use their own filthy lucre to do it.

Using the language of “rights,” feticide-defenders like Schakowsky are appealing to the respect Americans have for “negative rights”—also known as liberties—(e.g., the right to vote, assemble, exercise one’s religion, and speak freely), which are not accompanied by any obligation for others to subsidize them.

What feticide-defenders are really suggesting—without explicitly saying—is that women have a “positive right” (i.e., an entitlement) to abortion, which imposes a duty on others to subsidize it.

No matter how many times feticide-defenders call the killing of incipient human life “health care,” it’s not. Killing human fetuses is neither health care nor reproduction. It’s death facilitation and anti-reproduction. If leftists want to help poor women in other countries kill their offspring, leftists have the choice and negative right to do so.

In a 1991 article titled “Abortion and the Discreet Domesticity of Evil,” Father Paul Mankowski wrote,

[T]he language of the “reproductive health center” … is deliberately designed to obscure reality; it allow us to pretend that nothing disruptive is happening inside these sinister, functional buildings. … The language doesn’t really deceive, but it somehow gives permission to those who want to keep up the charade, to make-believe that the incinerators are only burning garage, to make-believe that the people in white coats are in the business of healing, not killing.

Our task, Father Mankowski argued, is to “call a spade a spade”:

To give things their proper names. To replace euphemism with the stark truth. To speak about what goes on inside those brick walls. To call evil evil—no matter how foolish or awkward it makes us appear, no matter how chilly or furious our fellow citizens become. And, above all, to work with every resource at our disposal to hinder, frustrate, and bring to a standstill the engines of human destruction.

Like Planned Parenthood which targets babies of color for profit, Schakowsky and her co-conspirators should rename her bill the “Killing Babies of Color Everywhere Act.” That way at least everyone everywhere will know what the bill is really about.

Take ACTION: Click HERE to send a message to your U.S. Representative to ask him/her to vote against H.R.1670. Despite what “progressives” claim, abortion is not health care. Abortion is the intentional destruction of an innocent pre-born human being.