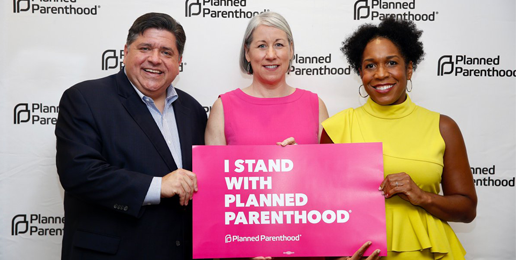 Here’s some news that should disabuse Illinoisans of the fanciful myth that cultural regressives care about women’s health. Last Monday, the Trump Administration announced a rule to ensure that the distribution of Title X federal funds complies with the federal statute that says this:

None of the funds appropriated under this title shall be used in programs where abortion is a method of family planning.

The Trump Administration clarified that this statute,

Prohibits the use of Title X funds to perform, promote, refer for, or support abortion as a method of family planning.

In response to the Trump Administration’s effort to ensure federal money is not used in ways that violate federal law, Illinois’ morally repugnant governor, J.B. Pritzker, is now refusing all federal grant money to family planning/women’s health centers that serve low-income women. Instead, he’s taking an estimated $2.4 million of taxpayer dollars from the underfunded Department of Health to give to Planned Parenthood (PP) facilities so they can continue their bloody business. That’s $2.4 million for just the remaining months of the fiscal year. And this on top of the $18.6 million PP received “from state taxpayers between 2009 and 2017.”

The offenses against morality, Illinoisans, and fiscal sanity continue to pile up. Pritzker has also committed to using state funds to join a multi-state lawsuit against the Trump Administration over this manifestly just rule.

For decades federal Title X funds (i.e., taxpayer money) have been provided to programs where abortion is a method of family planning—chiefly PP—in direct violation of federal statute. Cultural regressives try to make the patently silly argument that federal money remains untainted by their filthy human-slaughter business, because they keep funds completely separate. Evidently, they think Americans are morons who know nothing about fungibility.

Word to the conscience-seared men, women, and pretend-women who run PP: Everyone knows that allocating millions of federal Title X dollars to the teeny tiny micromini-machinery within PP that actually tends to women’s health frees up millions of dollars from other sources to feed its coldly efficient and profitable killing macro-machinery.

Human slaughter advocates call the compliance clarification a “gag rule” that will “prevent doctors from speaking openly with pregnant women about options including abortion.”

My patients expect me to speak honestly with them, to answer their questions, to help them in their time of need. It’s unconscionable and unethical for politicians to restrict doctors like me from speaking honestly to our patients.

She and other feticide supporters can rest easy (well, unless nightmares about dead babies haunt their nights). The new clarification permits slaughterhouses to provide information on abortion. The regulation

Feticidal facilities that want taxpayer money for women’s health care are still permitted to speak honestly with their patients about abortion. They just can’t perform abortions, refer women to hired killers, or cheerlead for abortion.

Note the other excellent news in the new regulation: It removes the requirement that Title X recipients provide abortion information, thereby expanding choice to organizations that choose life.

One month ago, the bloodthirsty Pritzker signed into law the most extreme human-killing legislation in the country, but even that wasn’t enough.

Battle for Life Intensifies in Illinois After Dobbs Ruling