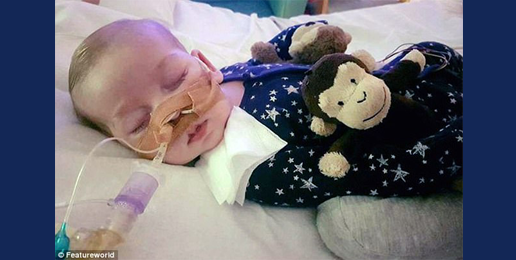 When Government Controls the Health Care System, This is Inevitable
Written By   |   07.06.17
PRINT

This picture (above) is hard for me to look at. I’ve got a one-year-old girl – and I cannot imagine what I would do if she had a life threatening illness, and the government told me I couldn’t do everything possible to save her.

If you haven’t seen this story, the picture above is of Charlie Gard. Charlie and his parents live in the UK, and he has a form of mitochondrial disease, a genetic condition that causes progressive muscle weakness and brain damage.

Charlie’s chances of surviving this disease are slim. However there is a treatment option available for him in the United States. It’s expensive, but his parents raised the money for it. The only problem is the hospital and the British government decided that because the odds of success are low, they will not allow the family to bring him to the U.S. for treatment.

This story could not be more relevant for America as we debate healthcare policy. We can discuss Medicaid expansion and abortion funding under Obamacare – both crucially important topics.

But as this story shows, more government control of healthcare means less freedom for you and me. The state replaces the rights of parents. And sick people are treated like numbers on paper, instead of patients with God-given rights.

So yes it’s true, the stats and experts say Charlie’s odds of survival are so low that it’s not practical to give him any more chance at life. But if that were my little girl or yours, would you want the government making that decision for you?