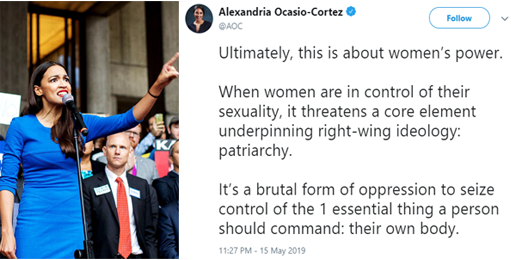 Following the vote in Alabama to ban all abortions except in cases where pregnancies threaten the life of the mother, Alexandria Ocasio-Cortez (AOC)—the ideological leader of depraved “progressives”—tweeted this:

Ultimately, this is about women’s power. When women are in control of their sexuality, it threatens a core element underpinning right-wing ideology: patriarchy. It’s a brutal form of oppression to seize control of the 1 essential thing a person should command: their own body.

Let’s examine her ignorant claims one by one:

1.) AOC’s first sentence is almost right. Just delete the word “just,” and it reads right. Abortion bans aren’t about controlling women’s bodies. Abortion bans are about preventing women from hiring killers to destroy and dispose of the bodies of their offspring. It’s remarkable that “progressives”  continue to argue that abortion affects only women’s bodies, but then again “progressives” are the new science-deniers—you know, the ones who assert with straight faces that men can get pregnant (Wait, then abortion isn’t just a women’s issue, is it?).

2.) AOC claims that prohibiting the slaughter of the unborn constitutes “controlling women’s sexuality.” Most pregnancies result from freely chosen sexual activity, so women who absolutely don’t want to become pregnant can freely choose not to have sex. Those women who don’t want to raise a child that results from their freely chosen sexual activity are free to relinquish their unwanted or imperfect children to the care of others. Engaging in sex has never been dependent on the legal right to have others killed. Does AOC think bans on infanticide constitute controlling women’s sexuality? If not, why not? What’s the difference? What if after birth, the mother realizes she doesn’t want the child, or she can’t afford her, or what if her daughter is  imperfect? What if the mother doesn’t want her daughter to be raised by another family? Why shouldn’t she have the legal right to put her daughter down?

3.) Many conservatives believe that taxpayers have no moral obligation to pay for other people’s birth control. AOC thinks such conservative opposition to paying for other people’s birth control constitutes outlawing “sex that falls outside their theology.” Say whaat? If taxpayers don’t pay for AOC’s contraception, she thinks she can’t have sex? Wow, someone better tell her pronto that she can have sex of any kind she wants, and she can pay to prevent the babies that sometimes result from voluntary and normal sexual intercourse. The freedom to engage in normal sexual intercourse carries with it no obligation for others to pay to prevent pregnancy.

4.) AOC’s claim that the absence of a legal right to hire someone to kill one’s own offspring is analogous to being owned is beneath contempt. Perhaps AOC should spend more time reading about the enslavement of African Americans to better understand what being owned looks like.

7.) AOC tries nonsensically to link the fanatical desire of Leftist women to be legally free to have their children killed to “patriarchy,” thereby ignoring the countless women of all ages who oppose human slaughter. She also ignores the fact that every child a mother aborts has a father, some of whom have no choice in whether their child lives, some of whom mourn their child’s death, and some of whom are never told they had a child who was killed. Not much patriarchal power in those cases.

Have you given the IFA weekly podcast a listen yet? Illinois Family Spotlight highlights cultural and political issues of particular interest and relevance to Christian conservatives in Illinois. You can find Spotlight on podcast applications like Google Play Music, iTunes, SoundCloud, Pocket Casts, and Stitcher.  You can also listen to our podcasts HERE on our website.