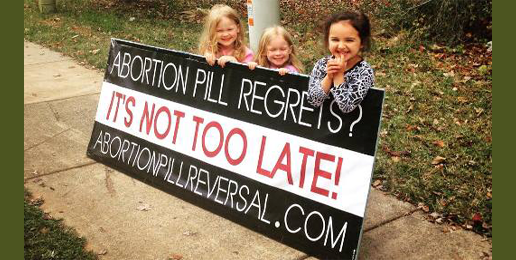 Recently the California Board of Registered Nursing determined that the scientific evidence in support of the Abortion Pill Reversal was important to the health and safety of mother and child.

The Board audited the method for over a year and, according to LifeSite News, then “decided that the Abortion Pill Reversal a medical intervention that has been pioneered by doctors George Delgado and Matthew Harrison and now includes a network of 350 physicians throughout the U.S.” This method allows mothers who have taken the abortion pill (Mifeprex or RU-486) to call a 24/7 helpline at (877) 558-0333 in order to have the process reversed.

Over 300 women have stopped their abortion from working by means of the abortion pill reversal.

“We’re grateful to California’s Board of Registered Nursing for their professionalism and diligence throughout this process,” Heartbeat International president Jor-El Godsey said, according to National Right to Life News. “Every nurse needs to know the truth about abortion—including the truth that a woman can change her mind in some cases even after the abortion has begun.”

This innovative procedure was discovered by Dr. Matt Harrison in 2006. He realized that if he gave women extra progesterone, it competed with the effects of mifepristone and could save the baby’s life by allowing nutrients to once again reach the growing baby.

A medically inaccurate and misleading video by Planned Parenthood instructs its viewers to first take mifepristone, saying, “it stops your pregnancy from developing.” It then instructs its viewers to take misoprostol one to two days later, claiming that the drug “causes cramping and bleeding that empties your uterus.” But this is far from reality. A Live Action video featuring Dr. Levatino details what really happens during this type of abortion:

At the abortion clinic or doctor’s office, the woman takes pills which contain mifepristone, also called RU 486. RU 486 blocks the action of a hormone called progesterone. When RU 486 blocks progesterone the lining of the mother’s uterus breaks down, cutting off blood and nourishment to the baby, who then dies inside the mother’s womb. Twenty-four to forty-eight hours after taking RU 486, the woman take misoprostol… that is administered either orally or vaginally. RU 486 and misoprostol together cause severe cramping, contractions, and often heavy bleeding to force the dead baby out of the mother’s uterus. The process can be very intense and painful, and the bleeding and contractions can last from a few hours to several days. While she could lose her baby anytime and anywhere during this process, the woman will often sit on a toilet as she prepares to expel the child, which she will then flush.

Even During a National Medical Emergency, the Abortion Industry Still Thinks It’s “Essential”