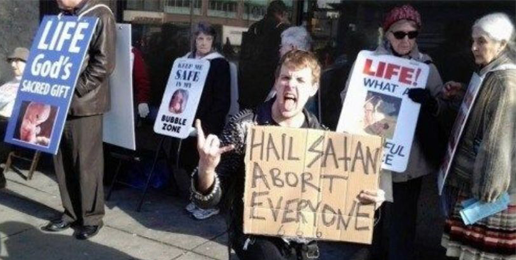 Last month, I shared a few stories from 40 Days for Life, a worldwide pro-life ministry of presence and prayer outside abortion centers. Created Equal, a pro-life ministry based in Ohio, focuses mainly on reaching people in urban areas and on college campuses. But they go to abortion centers too, and as they went about their work, they began to detect a disturbing trend. They were being increasingly harassed by abortion advocates who identified with Satanism. Sometimes the opposition came with violence and fury.

On that first point, Harrington explains:

Satanists and abortion supporters both believe in “bodily autonomy.” For the Satanist, defending abortion access is a worthy form of worship because one of their tenets states, “one’s body is inviolable, subject to one’s own will.” The Satanic doctrine of absolute autonomy over one’s own destiny has become the pro-abortion rallying cry of “My body, my choice.”

In the short film, Abortion: A Doctrine of Demons, just released on YouTube, Created Equal has captured the connections between abortion and Satanism–the Satanism espoused by the Satanic Temple, to be specific–which identifies itself as “the primary religious Satanic organization in the world” and which was featured in the 2019 film Hail Satan?.

In Created Equal’s Abortion: A Doctrine of Demons, you will see:

On the second point, and pressing beyond the rhetoric, from a Judeo-Christian perspective, there are clear parallels between abortion and Satan. Like the original rebellion of Lucifer, the act of abortion is an act of rebellion against the authority of God and the truth of the worth of human life. And while the Satanic Temple doesn’t profess belief in the actual being called Satan, they overtly identify with the Satanic cause of rebellion against God, whom they see as a tyrant:

Greaves and Blackmore have zeroed in on, and are actively promoting, the essence of Satan–rebellionagainst God–which inevitably leads to rebellion against what God has made, up to and including innocent human life.

Sometimes, we in the pro-life movement do well to let our opposition make our case for us. In this film, Created Equal has done just that: “Many Christians only consider abortion as a political or educational issue,” says Harrington. “However, abortion is a spiritual battle at its core.” He hopes this film will awaken a sleeping church to the spiritual battle in our midst.

**Warning: this video includes images that some viewers may find disturbing: