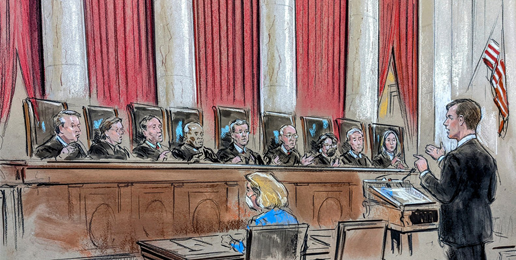 Quick Analysis of Dobbs Oral Arguments at the SCOTUS
12.02.21
PRINT

The significance of the Dobbs v. Jackson Women’s Health Organization case cannot be overstated. Pro-life citizens across the nation were praying fervently for the Justices of the U.S. Supreme Court as they heard oral arguments Wednesday morning.

The law at the center of this case is Mississippi’s late-term abortion ban for pre-born babies 15 weeks gestation and older. Many experts believe that the Court may overturn Roe v. Wade and Planned Parenthood v. Casey, at least in part, returning the issue of abortion back to the states.

Oral arguments went much as one would expect. Justices Stephen Breyer, Sonia Sotomayor, and, to a lesser extent, Elena Kagan, all made clear that they thought stare decisis should rule the day because otherwise it would look like the Court caved to public opinion. There was also some talk about reliance interests built up over 50 years.

Chief Justice John Roberts cast doubt on how a viability rule makes sense in light of the interests supposed to be furthered for women, i.e., making her own decisions and her circumstances. He pointed out more than once that the only issue they granted cert on was whether to continue to adhere to the viability rule and whether a 15-week line could pass constitutional muster, so he might be angling for a middle ground of striking down the viability rule but not totally discarding the undue burden standard of Casey.

Justices Brett Kavanaugh and Amy Coney Barrett didn’t seem to be following suit, though. Instead, Kavanaugh pointed out that in some of what are now considered the Court’s most important decisions, the Court overruled prior precedent. He seemed to stake out a position that the Court should be “scrupulously neutral” on this issue and leave it to state and federal legislatures. He said that the interests of the mother wanting to abort and of the fetus in living were irreconcilable, which makes this matter so hard and counsels for the Court to stay out of it.

Justices Clarence Thomas and Barrett raised some interesting questions about the purported interests of women on which Roe and Casey based their decisions. Barrett pressed on why laws that allow women to hand over their infants shortly after delivery, thereby terminating all parental responsibilities, do not eliminate talk in the decisions about women controlling their lives.

Thomas pointed out that the U.S. Supreme Court had upheld a state prosecution for abuse of a pregnant mother for ingesting controlled substances and harming her child. He never got a straight answer to why, if the state could do that if the ingestion was post-viability, it could not also do it if it was pre-viability or whether the Roe/Casey viability line would call for a different result because, if a woman can kill her child pre-viability, why can’t she abuse it.

Near the end of the clinic’s counsel’s argument, she said the common law provided a right to abort early in the pregnancy at the time the U.S. Constitution was adopted. The U.S. Solicitor General in her argument made a similar statement. Justice Samuel Alito jumped on appellee’s counsel, saying that the American Historical Association’s brief admitted that many states prohibited abortion at the time the Fourteenth Amendment was adopted, so how could it be considered a fundamental right. He didn’t mention Joseph Dellapenna’s brief, which obliterates these claims about the common law allowing abortion, but it seemed as if Alito was up on the common-law issue. (It is shameful, though, that counsel continue to spout these “myths,” also known as lies, about the common law.)

No direct questions were asked about whether an unborn child is covered by the due process and equal protection guarantees for “any person,” but Mississippi’s counsel, especially in his rebuttal, spoke of the many lives killed on account of Roe and Casey, although his overriding argument was that the matter should be left to the states.