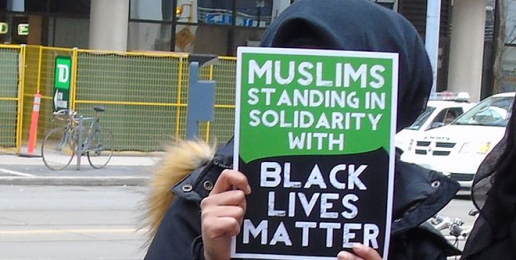 At the same conference, Khalilah Sabra, another activist, told the Muslim audience, “Basically you are the new black people of America… We are the “community that staged a revolution across the world. If we could do that, why can’t we have that revolution in America?” “That revolution” is apparently a reference to the “Arab Spring” revolutions which were inspired by the Muslim Brotherhood and which brought death and destruction to wide swaths of the Middle East and North Africa.

Do CAIR and other activist groups merely want to support Black Lives Matter, or do they hope to recruit blacks to their own cause? In 2014, ISIS used the protests and clashes in Ferguson, Missouri as an opportunity to attempt to recruit blacks to radical Islam. But ISIS is a known terrorist organization while CAIR, despite its shady history, is considered by many to be a moderate, mainstream Muslim organization. Thus, if it wanted to convert blacks, it would presumably want to convert them to a moderate version of Islam.

Or would it? According to Paul Sperry and David Gaubatz, the authors of Muslim Mafia, the supposedly moderate CAIR acts like an underworld cospiracy. In fact, it (along with numerous other prominent Muslim groups) was named by a U.S. court as an unindicted co-conspirator in a terrorist funding case. In addition, CAIR has been designated as a terrorist organization by the United Arab Emirates. Moreover, CAIR is a direct outgrowth of the Muslim Brotherhood, which is also listed as a terrorist group by the UAE, as well as by Egypt and Saudi Arabia. That’s the same Muslim Brotherhood that fomented the “Arab Spring” revolutions, the likes of which Khalilah Sabra wants to bring to America.

The move to bring black Americans into the Islamic fold actually predates CAIR and ISIS by quite a few generations. Black Muslim organizations such as Louis Farrakhan’s The Nation of Islam have been recruiting blacks to their unorthodox brand of Islam for decades. The vast majority of blacks have resisted the temptation to join, perhaps because of NOI’s overt racism, its anti-Semitism, and its criticism of Christianity. In any event, it seems that the Black Muslim movement is being gradually displaced by traditional Sunni Islam. That’s because Sunni Islam has a much better claim to legitimacy—it being a worldwide religion that traces its roots back not to a 1930s Detroit preacher named Wallace Fard Muhammad, but to a seventh century prophet named Muhammad.

Will Islam catch on with black Americans? A great many blacks in America have a strong commitment to Christianity, which serves to act as a buffer against conversion to Islam. Still, it’s likely that Islam will make more inroads into the black community than it has in the past. For one thing, traditional Islam doesn’t have the “kook” factor which keeps most blacks at a distance from The Nation of Islam. The NOI belief system includes giant space ships, an evil scientist who created a race of “white devils,” and, most recently, an embrace of Dianetics.

By contrast, traditional Islam looks much more like … well, like a traditional religion. Indeed, when approaching Christians, Islamic apologists like to play up the similarities between the two religions. Each year around Christmastime, Ibrahim Hooper, CAIR’s Public Relations Director, sends out a Christmas letter with the message, “We have more in common than you think.”

One of the common elements is Jesus, who is honored as a great prophet in Islam. The self-proclaimed leader of the Black Lives Matter protest in Dallas on July 7, 2016 once wrote of feeling called to follow Jesus into Islam. In November 2015, the Reverend Jeff Hood, a white leftist pastor, wrote:

I have no question that Jesus is so intimately incarnated with and connected to our Muslim friends that he has become one. If we want to walk with Jesus in this moment of extreme oppression and marginalization, we will too.

Islam is an equal-opportunity recruiter. It is open to white leftists and black boxers alike. But Islamic proselytizers may see the present moment as an opportune time to concentrate on blacks. Why is that? Perhaps mainly because our educational system has managed to convince both black and white students that America is a racist society that was built on the back of slavery. Almost all students have been indoctrinated in the narrative that America has a shameful history and heritage. For blacks, however, this version of American history is more plausible because their ancestors actually did suffer from the ravages of slavery and the humiliation of Jim Crow laws.

Nevertheless, during the Civil Rights era and afterwards, both blacks and whites worked hard to heal racial divisions. Racism—both black and white—seemed to be dying a natural death until leftists, with the aid of the media and the Obama administration, managed to resuscitate it. Despite the two-time election of a black president and the appointment or election of black Attorney Generals, black Secretaries of State, black U.S. Supreme Court justices, a black chief of Homeland Security, black mayors, and black police chiefs, a number of blacks seem convinced that white racism is the number one factor that is keeping them down.

Enter CAIR and other Muslim “civil rights” groups that are only too happy to reinforce this narrative. They profess to understand the plight of American blacks because they claim to be victims of a similar oppression—victims of colonialism, racism, and Islamophobia. Part of their pitch is that there is no discrimination in Islam. That might seem a hard sell if you’re familiar with the history of the Arab slave trade or with Islam’s own version of Jim Crow, the dhimmi system. The trouble is, those items have been dropped down the memory hole. The same teachers and textbooks that excoriate the Christian West tend to present Islam as though it were the font of all science and learning.

It might be hoped that blacks who convert will choose some milder form of Islam—something like the Sufi version practiced by Muhammad Ali after he left The Nation of Islam. Unfortunately, that’s not likely because CAIR, ISNA, and similar Islamist groups are practically the only game in town. They have successfully managed to present themselves as the official face of Islam in America, and ISNA, along with the Muslim Brotherhood-linked North American Islamic Trust, controls a majority of the major mosques.

In backing Black Lives Matter, CAIR and company run the risk that their own radicalism will be revealed. Apparently, they don’t consider that to be much of a risk. They know that the court eunuchs in the media will do their best to mainstream Black Lives Matter as a peaceful movement, just as the media has accepted the premise that CAIR itself is a mainstream, moderate organization.

CAIR can also count on President Obama to take the side of Black Lives Matter. Recently, he went so far as to compare it to the Abolitionist Movement against slavery. CAIR is no doubt confident that Obama has its back too. After all, the president made it clear from the start of his administration that he supported the Muslim Brotherhood—the “Mothership” (to borrow an NOI term) out of which CAIR sprang.

At the MSA-ICNA Convention, CAIR and associates felt safe to reveal their revolutionary side. They understand that Obama has a penchant for revolutionary causes—provided that they are leftist (the Castro brothers in Cuba) or Islamist (the “Arab Spring” revolutions) in nature. Before his first election, Obama promised a fundamental transformation of American society. CAIR and the Muslim Brotherhood are also interested in a fundamental transformation. Indeed, the chief theorists of the Muslim Brotherhood, Hassan al-Banna and Sayyid Qutb, were heavily influenced by Lenin and by communist revolutionary thought. So was Maulana Maududi, the founder of Jamaat-e-Islami, the Asian equivalent of the Muslim Brotherhood. “Islam,” wrote Maududi, “is a revolutionary ideology and programme which seeks to alter the social order of the whole world and rebuild it in conformity with its own tenets and ideals.” He added, “‘Muslim’ is the title of that International Revolutionary Party organized by Islam to carry into effect its revolutionary program.”

That statement has to rank fairly high on the fundamental-transformation scale, and it bears a striking resemblance to the tear-it-down-to-build-it-up leftist school of thought to which Obama belongs. Whether or not the fundamental transformation that Obama desires is the same as that sought by Islamists, he does seem anxious to effect one before his term in office runs out.

The emerging confluence of interests between radical Muslim groups, radical black groups, and a leftist president bent on a radical transformation of America should give us more than pause; it should alarm us. Does Obama intend to speed up the leftward movement of American society during his remaining months in office? Does he hope to accelerate the Islamization of America through a coalition of radical black, leftist, and Islamist groups? Or does he even care what the change is, as long as it’s revolutionary in nature?

Most Americans tend to assume that we are still operating under the same rules that have governed our society since its founding. They have not come to terms with the possibility that some of our leaders are operating under a completely different set of rules—what leftist activist Saul Alinsky called “rules for radicals.”

This article was originally posted at Crisis Magazine.

William Kilpatrick taught for many years at Boston College. He is the author of several books about cultural and religious issues, includingPsychological Seduction; Why Johnny Can’t Tell Right From Wrong; and Christianity, Islam and Atheism: The Struggle for the Soul of the West and the forthcoming The Politically Incorrect Guide to Jihad.  For more on his work and writings, visit his website, turningpointproject.com