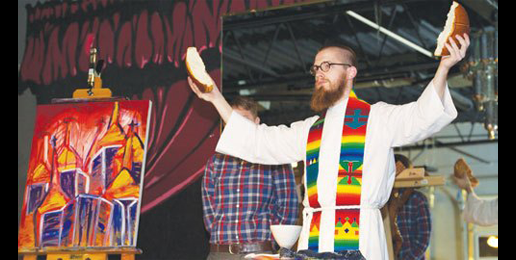 What the tragic events of last week did not need was the distraction posed by one of the organizers of the Dallas protest, Dr. Jeff Hood, the 32-year-old bearded, bespectacled white man who is effective at one thing: self-promotion. While Selma had Dr. Martin Luther King Jr., an eloquent, dignified, and committed follower of Christ, Dallas had Dr. Hood, a narcissist committed to self-aggrandizement, sexual deviance, and syncretism.

After the shocking shootings of Dallas police officers, Hood—an admirer of Jeremiah Wright—could be found all over the airwaves, including on The Kelly File with Megyn Kelly.

Hood, a father of five young children, offers this description of himself on his website:

The Rev. Dr. Jeff Hood is a Baptist pastor, theologian and activist living and working in Texas. A graduate of Auburn University, Southern Baptist Theological Seminary, Emory University’s Candler School of Theology, University of Alabama and Creighton University, Dr. Hood also concluded a Doctorate of Ministry in Queer Theology at Brite Divinity School at Texas Christian University. Dr. Hood was ordained at a church within the Southern Baptist Convention in 2006 and received standing in the United Church of Christ in 2015.

The author of ten books (The Queer: An Interaction with The Gospel of John, The Queering of an American Evangelical, The Sociopathic Jesus, The Year of the Queer, Jesus on Death Row, Frances, Last Words from Texas: Meditations from the Execution Chamber, The Rearing of an American Evangelical, The Courage to Be Queer and The Basilica of the Swinging D*cks)…In 2013, Dr. Hood was awarded PFLAG Fort Worth’s Equality Award for Activism….With deep soul and a belief that God is “calling us to something queerer,” Dr. Hood is a radical mystic and prophetic voice to a closed society.

Hood says he’s anointed “to comfort the afflicted and afflict the comfortable.” “Jesus wasn’t a Christian” is one of his sayings. He thinks “Jesus has a vagina,” [and] “Jesus is queer” is one [of his sayings] that spurred hundreds of rebukes from Christians across Facebook, calling him a “false prophet,” a “charlatan,” and “nothing more than a left-wing activist.” Some of his former congregation put him in the ranks of scandalous TV evangelists like Jim Bakker.

He also suffers from bipolar disorder, which sometimes means hallucinations and bouts of paranoia.

After leaving the Southern Baptist denomination and purportedly seeking treatment for his mental illness, Hood started a church for homosexuals in a Denton, Texas homosexual bar that lasted a year. Former church members’ descriptions of Hood some remarkably like descriptions of cult leaders:

“After working within the church for several months as an ‘elder,’ it became apparent that a lot of the leader’s misogynistic white male privilege kept showing, regardless of how much he would hide it under a thin veil of faux hipster economic struggling.”…When various issues or statements regarding upsetting comments that could be perceived as misogynistic or offensive were brought to the leader’s attention, they were usually met with a defensive, self-pitying martyrdom which was served to give him immunity from any and all criticism.”

Another wrote, “No criticism of the pastor was allowed. If someone challenged his behavior, he told lies about them to the congregation. If someone brought up problematic elements of the church, they were immediately silenced. It wasn’t until I spoke with other people who had left that we began to realize the amount of lies that we had been told about [one another]. I left the church because I experienced firsthand the pastor’s lies, manipulation and lack of boundaries.

For a time, Hood was involved with the largest homosexual church in America, Cathedral of Hope United Church of Christ (UCC) in Dallas, but like so many of his endeavors, this relationship was short-lived. After Hood was arrested and briefly jailed in Ferguson, Missouri, where, according to Hood, he was one of the protest leaders, Hood hurled epithets at his former church leaders at the Cathedral of Hope, complaining that “ those chicken sh*t a**holes…didn’t even announce that I had been arrested at church.”

Hood and his wife Emily support their five children under five (including two sets of twins) by “being creative, she as an artist and he as a writer, but they also receive help from friends and Hood’s 88-year-old grandfather, who still doesn’t quite understand his grandson’s ministry.”

On his blog, a picture of a deeply troubled  man and heretic emerges.

Hood expresses his appreciation for the “public witness” of Reverend Charles Moore who lit himself on fire to express “his frustration with the United Methodist Church’s position on human sexuality, opposition to the death penalty, disdain for racism (especially in his hometown of Grand Saline) and his deep anger at Southern Methodist University’s decision to house the George W. Bush Presidential Center.”

Hood asserts that  “Jesus sinned. Jesus was a racist y’all.” He finds everything “[f]rom the historical personhood of Adam and Eve to ideas of substitutionary atonement to a literal hell to the impending return of Jesus” to be “really problematic doctrines.”

And here is how he concluded one of his sermons:

Love your neighbor…put down your gun.

Love your neighbor…open your borders.

Love your neighbor…embrace the revolutionary spirit of our age.

With the first black president fomenting social and political division, with public school teachers indoctrinating children with an imbalanced picture of American history, and with rebellious syncretists preaching heresies in our churches, it’s no wonder that racial tensions are escalating. Hood, a mentally ill, narcissistic heretic deserves neither pulpits nor press conferences.