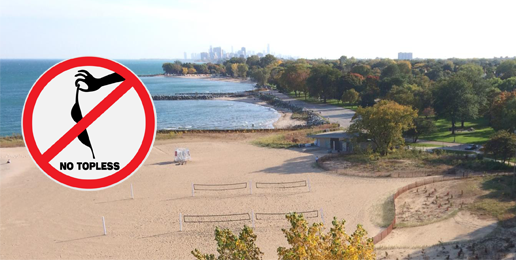 On September 6, the Human Services Committee of Evanston City Council voted unanimously to send Alderman Devon Reid’s proposed ordinance to allow women to go topless in “all public places (forward to 51:25)” to the “Equity and Empowerment Committee.” Reid wants his proposed ordinance reviewed over concerns that “it excluded the transgender community.” How might it have done that, you may wonder. Well, apparently, someone objected to the ordinance’s “gender binary” language. Sex-deniers cannot tolerate any public acknowledgment that the human species is a sex-binary species.

Reid, is a “queer, 29-year-old” activist and former city clerk who was arrested in 2018 for driving on a license that had been suspended since 2013 and ticketed for “possession of under 10 grams of marijuana.” This was two years before Illinois legalized recreational marijuana. It seems Reid has little respect for either public decency or the law.

The committee meeting is well worth watching, especially from 3:15-8:14 during which time attorney and president of Evanston’s Parks and Recreation Board, Robert Bush, shared his opposition to the proposed ordinance as well as his concern about the lack of public input on it. Later in the meeting, “political consultant,” community organizer, and Human Services Committee member Bobby Burns unprofessionally described his colleague Mr. Bush as “irresponsible” for spreading “misinformation.” Ah yes, the “misinformation” ploy–the last refuge of a political scoundrel.

According to WBBM, Reid says “he wants to treat men and women equally and eliminate ambiguity for trans people.” Perhaps Reid doesn’t understand that “equality” demands we treat like things alike. One would think the “queer” Reid would know that men and women are not alike in critically important ways. One important way they are unlike is in their sexed bodies.

While Reid’s ordinance will harm men, women, boys, and girls, the harm done to girls and women will be far greater.

This is the rotten fruit of both the ideology of “equity” and the ideology of the “trans” cult. And it serves both the anarchistic impulses of radical leftists who seek to destroy America by a thousand cuts and the prurient desires of men and women unmoored from morality.

Equity used to mean to treat something or someone fairly, justly, or impartially. The left now uses it to mean either to treat unlike things alike or to ensure identical outcomes for dissimilar people, acts, or other phenomena. To treat men’s bodies different from women’s is not unfair, unjust, or a manifestation of partiality. Treating men’s bodies different from women’s bodies grows out of the recognition that men and women are different. They are different in their bodies, emotions, desires, and their sexual responses to one another’s bodies.

Men’s chests are wholly different from women’s breasts. This commonsense statement shouldn’t need to be spoken, but in this time when society is awash in or in thrall to foolish doctrinaire ideologies, commonsense has no purchase and no home.

Not coincidentally, Evanston Mayor Daniel Biss—who is a member of the city council—is a “trans” cult collaborator. In June 2021, just a month after he became mayor of Evanston, he was asked, “What is your favorite charitable cause or causes.” Biss responded,

At the end of each year we sit with our kids and discuss what we want to focus on. We often donate to causes focusing on issues of racial justice or justice for the LGBT community especially transgender and non-binary people.

So, what do business owners and the Evanston Chamber of Commerce think about this ordinance? Will families stop taking their children to downtown Evanston, choosing instead to shop and go to restaurants in neighboring Winnetka, Glencoe, Highland Park, and Lake Forest, all of which have charming, family-friendly downtowns and plazas?

Will decent families want to move to Evanston? Will decent Evanston families consider moving out of Evanston?

What will happen to Evanston’s annual Art & Big Fork Festival held for three days every August? Will attendance by families decrease? Maybe the increase in attendance by anarchists and perverts will financially compensate for the loss of funds from decent people.

Where are Evanston church leaders on this issue? Do pastors and elders feel an obligation to lead on an issue of this magnitude?

What about Evanston Christians? Will they step up to oppose this assault on public decency?

Leftists don’t seem to understand that the structures of government have a purpose beyond facilitating the sexual desires of the deviant and transgressive among us. A good government protects the most vulnerable, promotes the public good, and maintains public order, in part by establishing boundaries that restrain the perverse impulses of fallen humans. Abandoning this function will make cities like Evanston unfit for human flourishing.