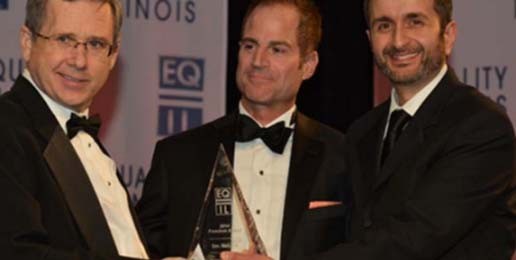 On Saturday evening (Feb. 8, 2014), U.S. Senator Mark Kirk (R-Illinois) was presented with the “Freedom” award by Equality Illinois, the state’s leading homosexual pressure group, at a swank fundraising banquet in Chicago. You can watch a video of the presentation below [or on YouTube HERE].

Senator Kirk has become one of the most liberal Republicans in Washington D.C. on homosexual-related issues with ever greater acts of pandering to the LGBTQ Lobby. (He came out for homosexual “marriage” and is pushing for passage of ENDA, the Employment Non-Discrimination Act [see homosexual activists release on Kirk and ENDA HERE],

Read more about ENDA in the Heritage Foundation’s report on the ENDA bill HERE.

You might recall how Senator Kirk – in a capitulation whose cowardice was eclipsed only by its pettiness – recently blocked the respected pro-family organization  World Congress of Families (WCF) from securing a meeting room on Capitol Hill. This towering act in defense of “freedom” (sarcasm) came after the Senator heard complaints against WCF from some homosexual activists. World Congress, affiliated with The Howard Center, is based in Rockford, Illinois.

Thus it appears that Senator Kirk’s conception of “freedom” matches that of his intolerant homosexual activist allies. In 2012, Equality Illinois launched a vicious and slanderous campaign to deny Chick-fil-A restaurants the “freedom” to operate in Illinois. As you can see below, EQ falsely accused C-f-A of “discriminatory policies” because the latter’s Chief Operating Officer, Dan Cathy, had spoken out publicly against homosexual “marriage” as tempting the judgment of God. The Chicago “gay” group launched this “Flick the Hate” petition campaign designed to boot the Christian-owned chicken fast food franchise out of several college towns: 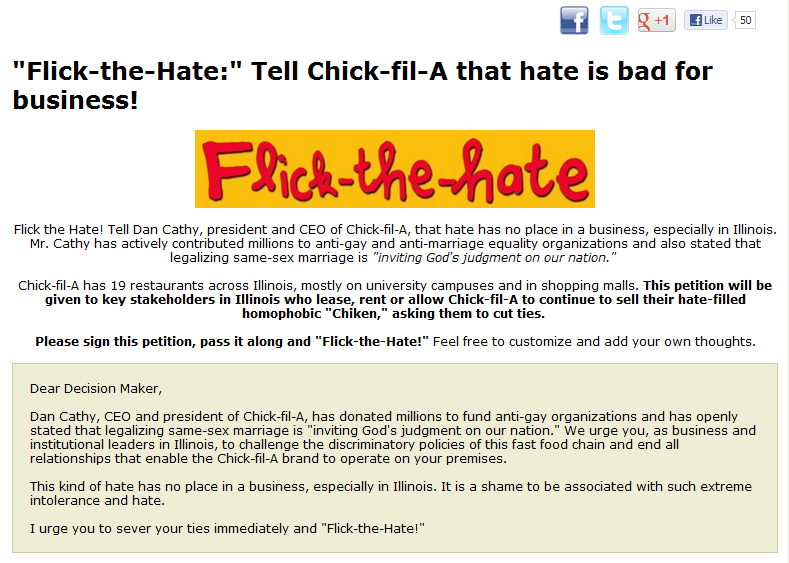 As you can see, Equality Illinois’ malicious campaign smeared Chick-fil-A and its COO, Dan Cathy, as representing “hate”–merely because Cathy disagreed publicly with “gay marriage.” EQ sought to petition stakeholders into cancelling their rental leases to the 19 Chick-fil-A restaurants then operating in Illinois. (Thankfully, they failed; there are now 32 C-f-A franchises in Illinois, according to the company’s website.) The EQ page reads, in part (emphasis theirs):

Chick-fil-A has 19 restaurants across Illinois, mostly on university campuses and in shopping malls.This petition will be give to key stakeholders in Illinois who lease, rent or allow Chick-fil-A to continue to sell their hate-filled homophobic “Chiken,” asking them to cut ties….

That kind of hate has no place in a business, especially in Illinois. It is a shame to be associated with such extreme intolerance and hate.

…We urge you, as business and institutional leaders in Illinois, to challenge the discriminatory policies of this fast food chain and end all relationships that enable the Chick-fil-A brand to operation on your premises.

This kind of hate has no place in a business, especially in Illinois. It is a shame to be associated with such extreme intolerance and hate.

I urge you to sever your ties immediately and “Flick-the-Hate!”

It is important to remind the reader that Chick-fil-A as a corporation never “discriminated” against homosexual customers or employees. In fact, one homosexual C-f-A franchise owner defended the restaurant chain and a New Hampshire Chick-fil-A restaurant owner supported a  “gay pride” event. What ignited the LGBT-obsessed Left was that Dan Cathy actually spoke out publicly against counterfeit “gay marriage.” The pro-homosexual/liberal campaign against Chick-fil-A also involved political opposition to proposed restaurant openings in Chicago and Boston–with liberal politicians seeking to banish C-f-A in the name of “tolerance.”

The Left’s opposition to Chick-fil-A led to a massive Christian pro-family backlash in the form of “Chick-fil-A Appreciation Day,” organized by Mike Huckabee, former Arkansas governor and 2008 Republican presidential candidate. Americans by the hundreds of thousands nationwide went to their local Chick-fil-A to support the restaurant chain.

Thankfully, the homo-fascists at Equality Illinois–and their Democratic political allies who used their offices to attempt to deny Chick-fil-A the right and opportunity to expand and do business (e.g, in the economically-struggling State of Illinois) did not prevail. In fact, they succeeded only in generating more support for Chick-fil-A among many, many consumers.

As you can see below, Sen. Kirk is still recovering from the stroke he suffered in 2012. We wish him a continued and speedy recovery. Politically speaking, however, we at AFTAH are appalled at Kirk’s pandering to Hard Left activists of the sort usually associated with Democratic politics, and we plead with him to return to supporting the pro-family principles of the Republican Party Platform.

Take ACTION:  Call or write Senator Mark Kirk R-IL)  at his Washington D.C. office (202) 224-2854; or at his Chicago office (312) 886-3506; or through his online Comment Form HERE] and urge him to stop rewarding anti-Christian bigotry. Ask him to return this “Freedom Award” from the hateful anti-Christian homosexual group, Equality Illinois–which in 2012 launched a failed pressure campaign to kick Chick-fil-A restaurants out of Illinois.

You can watch the YouTube video of the Equality Illinois presentation of the “Freedom Award” to Sen. Kirk HERE

This article was originally published at the AFTAH.com blog.