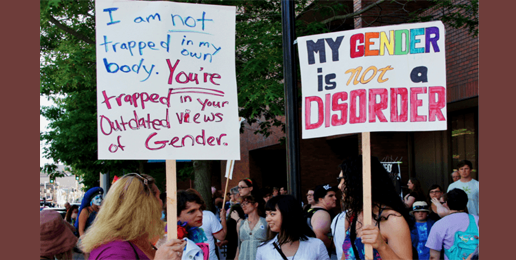 Earlier this week, I mentioned that I had submitted a commentary on the “trans” ideology to the Chicago Tribune on July 31 that was rejected. I noted this only because several days after I submitted this commentary, Trib reporter Kim Janssen wrote an article about my article that urges Christians to exit public schools in part because public schools promote the irrational, incoherent, and destructive “trans” ideology. Here is my commentary that the Trib rejected:

Progressives refer to the “right side of history” a lot, always in reference to their own views and usually in reference to the newest sexuality fad. Currently, they’re using the phrase to ridicule those who believe that biological sex per se is intrinsically and profoundly meaningful. Progressives believe that “gender identity”—that is, one’s subjective, internal feelings about one’s sex—trumps sex in every context, including those in which persons engage in private activities.

Progressives believe that segregating humans by sex in spaces where undressing, showering, and engaging in bodily functions take place constitutes not only being on the wrong side of history but also reflects hatred, lack of compassion, ignorance, bigotry and unjustifiable exclusion.

The “trans” community argues that maleness and femaleness have nothing to do with anatomy, biology, interests, abilities, or the “arbitrary, socially constructed expectations or behaviors that society assigns, imposes, or associates with males or females (e.g., types of toys, clothing styles, hairstyles, make-up).”

The “trans” ideology rejects the idea that the human species is binary.

And the “trans” community believes that since maleness and femaleness have no intrinsic connection to anatomy, physiology or arbitrary socially constructed phenomena, there is no need for those who identify as “trans” to take cross-sex hormones, have surgery, or cross-dress.

The end game for the “trans” community is not permission for a few gender-dysphoric men and women to have unfettered access to the private spaces of opposite-sex persons. Their end game is the eradication of public recognition of and respect for sexual differentiation. This means allowing objectively male persons with all their bodily accouterments intact in women’s private spaces and vice versa based merely on their claim that they identify as the opposite sex.

“Trans”-identified men and women seek unrestricted access to the restrooms, locker rooms, showers, shelters, semi-private hospital rooms, nursing home rooms, and sports teams of persons of the opposite sex. They seek to impose hefty fines on citizens who refuse to refer to them by pronouns that correspond to the sex they are not. They seek to force all citizens to pretend that men can menstruate, become pregnant, and “chest-feed” infants.

Minnesota has adopted school guidelines that permit the “segregation” of students who object to sharing private spaces with classmates of the opposite sex unless such accommodations result “in stigmatizing the transgender and gender nonconforming student.” So, what happens if a “trans” student feels stigmatized? Will school administrations force objecting students to share locker rooms and restrooms with opposite-sex peers?

How does the “trans” community define maleness and femaleness? If, for example, maleness has nothing to do with biology, anatomy, clothes, make-up, hairstyles, interests, or behaviors, what is it?

Which private spaces do “progressives” think “gender fluid,” “gender-questioning,” “bi-gender,” and “tri-gender” persons should be allowed to use?

Either the objective, immutable sex of humans matters or it doesn’t. If it doesn’t matter, then all sex-segregated spaces, contexts, and activities should be eradicated. Everything should be co-ed for everyone everywhere. If objective, immutable biological sex has no intrinsic and profound meaning, then there should exist no single-sex restrooms, locker rooms, dressing rooms, showers, shelters, semi-private hospital rooms, nursing home rooms, athletic teams, jails, or prisons. If objective biological sex has no more meaning than hair color, then sex-segregation should end.

These seem like reasonable issues to explore before news “reporters” assert that “trans”-identifying persons have the “right” to access the private spaces of opposite-sex persons. Apparently the Trib believes that winning a debate through demagoguery masquerading as objective news reporting is easier than winning through reason. Didn’t Neil Postman kind of warn us about this in his book Amusing Ourselves to Death?