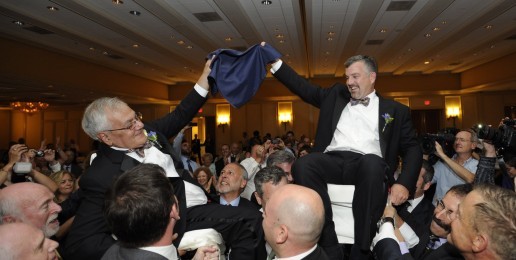 The Episcopal Church has lost its collective theological mind. On Monday, July 9, 2012, the Episcopal Church General Convention voted to add the terms “gender identity and expression” to its anti-discrimination canon. That’s seems at minimum  odd because God clearly discriminates against cross-dressing.

What this means is that those who choose elective body mutilation (i.e., “sex reassignment surgery”) and cross-dressing can be ordained within the Episcopal church. Those who reject the sex that God has assigned them and who reject Scripture on cross-dressing and marriage and church leadership will now be teaching in churches.

Ironies abound, including the tragic irony that while Christ beckons children to come to Him, “trans-inclusive” Episcopalians will make church a place where children should not go.

The arrogant U.S. Representative Barney Frank now has the dubious distinction of being the first member of Congress in the history of the United States to “marry” someone of his own sex. Frank also has the dubious distinction of having been reprimanded by the U.S. House of Representatives for fixing 33 parking tickets for the male prostitute whom Frank hired and housed in his home.

Frank recently pouted in an interview that none of his Republican colleagues had publicly congratulated him on his nuptials. He acknowledged private kudos from a few Republicans and hearty congrats from many Dems. Shame on anyone for congratulating Franks for his participation in a sham marriage that contributes to the further erosion of the institution that stands at the center of civilized public life.

The BBC is reporting  that a detailed account of the sexual activities of adelie penguins written by biologist George Murray Levick, who was part of Captain Scott’s expedition to the South Pole in 1910, has just been made public. This report reveals that adelie penguins were seen engaging in “sexual coercion, sexual and physical abuse of chicks, non-procreative sex,” sex with penguin corpses, and homosexual acts.

Much ink has been spilled about the children’s picture book And Tango Makes Three, which tells the heartwarming tale of purportedly homosexual penguins Roy and Silo who hatched a chick together.  They were deemed homosexual despite the fact that no one ever saw them engaged in sex.

Much less ink has been spilled—at least in the mainstream press—about the end of this saga. The purportedly homosexual Silo jubilantly celebrated by homosexual activists is now ex-gay, having been transformed by the alluring female Scrappy who sashayed into his life.

The larger question that Levick’s South Pole account brings into focus is, should we really be looking to the animal kingdom for our ideas about human morality?

And let’s pray that there are no picture books based on the penguin antics described by Dr. Levick.

Parents who take their children to parades that celebrate deviant sexuality (aka “gay pride” parades) with obscene public behavior demonstrate their unworthiness to be parents. Americans for Truth has provided a glimpse into the sordid world of “pride” parades with photos from the recent sorry spectacle in Philadelphia which children of all ages not only attended but participated in.

And what kind of darkness clouds the hearts and minds of parents who bring their children to witness such soul-destroying pollution?

Click here to see some of what our business and government leaders think serve the best interests of the Philadelphia community, but be forewarned, it ain’t pretty.

Jane Pitt deserves our thanks, admiration, and prayers for saying publicly what so few have the courage to say. She sent a letter to her local Springfield, Missouri newspaper in which she stated the unvarnished truth that Barack Obama supports “same sex marriage” and the killing of the unborn.

And how do those who clamor for “equal rights” while denying unborn babies the right to mere existence and who decry name-calling respond to Mrs. Pitt’s respectfully expressed views?  They respond by issuing death threats and hurling hair-curling epithets at Mrs. Pitt. So much for tolerance and diversity.

Please pray for Mrs. Pitt. Pray that God grants her peace, comfort, protection, wisdom, and courage.  And pray that we all, including Mrs. Pitt, remember that Jesus said, “you will be hated by all for my name’s sake. But the one who endures to the end will be saved.”

The notion that no one should ever feel bad about their behavior or the behavior of loved ones has proven to be a cultural toxin. In the service of non-discriminating non-judgmentalism, we now have picture books read to children in early elementary school that teach that all family structures are indistinguishable in terms of their inherent goodness. These books proclaim deceitfully that it matters not to the welfare of children whether they’re raised by single parents, divorced parents, or homosexual partners.

Silence in public schools on the topic of “diverse family structures” is not an option for “progressive” teachers who view themselves as “agents of change.” And teaching that intact, married heterosexual parents are best for children would be a grotesque injustice to these change agents. Nope, nothing less than affirmation of all structures will do—well, almost all. It will be at least a year or so before affirmation of polyamorous structures will be demanded.