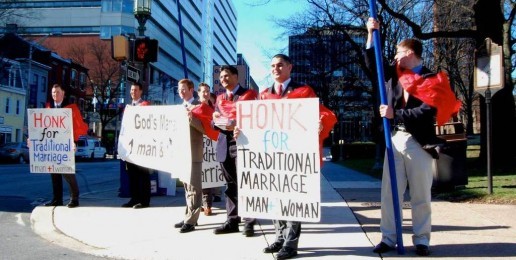 On May 21, 2011, the proposed Minnesota Marriage Amendment passed the House of Representatives by a vote of 70 to 62. This means that the question will be put on the ballot in the 2012 election.

If the amendment passes in November of next year, Article XIII will be amended to include the words, “Only a union of one man and one woman shall be valid or recognized as a marriage in Minnesota.”

The question submitted to the voters will be: “Shall the Minnesota Constitution be amended to provide that only a union of one man and one woman shall be valid or recognized as a marriage in Minnesota?”

Here are some thoughts rooted in my Christian, biblical convictions that may help you think through this issue. I hope they help.

1. There is no such thing as so-called “gay marriage.”

The reason is that in God’s eyes, there simply is no such thing as so-called “gay marriage.” It does not exist. It cannot be made to exist by desires or decisions or language or laws. God ordained marriage with the words: “A man shall leave his father and his mother and hold fast to his wife, and they shall become one flesh” (Genesis 2:24). Marriage is the union of a man and a woman in a lifelong covenant as husband and wife.

Humans don’t create or define marriage. God does. Not all humans believe this. But those who do, should not use the term “marriage” to refer to any other relationship than the one God ordains.

When the human relationship with God was broken at the beginning of our race, countless good things were broken, including the goodness of sexuality. When the vertical axis of our existence was disordered, the horizontal axis was disordered.

There are many tragic expressions of this disordering in the sphere of sexuality. For example, narcissism, exhibitionism, bestiality, pornography, fornication, adultery, abusiveness, coercion. All of us are broken sexually one way or the other and in need of the forgiving and healing mercy that only comes through Jesus Christ.

One of the expressions of this horizontal disorder of our sexuality is same-sex desires. Thousands of decent, moral people, including Christians, find this disorder in their desires. Many do not want it, but it is there. The apostle Paul describes the roots of it, along with other sins, in the disordering of man’s relationship with God.

[We humans have] exchanged the truth about God for a lie and worshiped and served the creature rather than the Creator . . . . For this reason God gave them up to dishonorable passions. For their women exchanged natural relations for those that are contrary to nature; and the men likewise gave up natural relations with women and were consumed with passion for one another, men committing shameless acts. (Romans 1:25-27)

This does not mean that every person who finds same-sex desires in his heart has consciously brought it on himself by exchanging God for a lie. Some of the most God-honoring, Christ-exalting people may find themselves with deep disorders.

As in the case of other disordered desires, God forbids that we indulge same-sex desires. For example, the apostle says, “Do you not know that the unrighteous will not inherit the kingdom of God? Do not be deceived: neither the sexually immoral, nor idolaters, nor adulterers, nor men who practice homosexuality” (1 Corinthians 6:9).

Therefore, the practice of homosexuality is a sin. And we can see from this same verse that heterosexual adultery is also a sin. Both sins are the indulgence of disordered sexual desires. Men should not desire another man or another man’s wife. Therefore, God forbids that we act on these desires.

Knowing how deeply dependent all of us are on the mercy of God for the forgiveness of our sins, and the healing of our peculiar brokenness, Christians should be slow to anger and quick with compassion. Jesus did not condone sin, but was compassionate with broken-hearted sinners. From the cross he even prayed for his proud adversaries: “Father forgive them, for they know not what they do” (Luke 23:34). Joe Hallett, who died of AIDS in 1997, helped me taste how conviction and compassion come together. I pray that this remarkable and rare combination will pervade the Christian community as the marriage debate continues.

3. Not all sins should be proscribed by human law, but some should be.

But where to draw the line on which unethical actions are made illegal is a judgment call that in our system of government is made by elected legislators. It’s a pretty good system that balances the freedom of the human conscience (Luke 12:57; 2 Corinthians 5:11; Acts 17:11) with the rights of government to make laws and use force (Romans 13:1-4).

Some of the reasons would be 1) without a common ground of biblical holiness, the precise definition of what’s acceptable to look at would entangle our lawmakers in hopeless disputes; 2) the privacy of the act would make the law virtually unenforceable; and 3) the indirect way that people are hurt make it unfeasible for the law to be handled with proper proportion. So there are many sinful behaviors that should not be illegal.

4. The legal significance of marriage makes a statutory definition necessary.

It is clear that some laws are necessary in relation to marriage. The clearest place this is seen is in relation to children. Sexual union in marriage usually produces children. Marriage creates a mutual claim of parents to have the right to raise their children. These rights of parents must be protected by law because of the reality of kidnapping and because of custody conflicts that arise through divorce.

There are many other laws relating to marriage, such as inheritance laws, and the rights of married couples to own property or file income taxes together, and so on. The inevitable legal significance of marriage makes it imperative that there be a clear statutory definition of what it is.

5. It is wise that our laws define marriage as between a man and a woman.

I am not making a case for the legal prosecution of homosexual practice. Nor would I advocate the legal prosecution of heterosexual fornication. But I would make a case against the institutionalization of fornication, or making it a building block of society, or mandating its approval, or imbedding it in our laws. It is one thing to tolerate sin. It is another to build society on it.

May God have mercy on us. Laws are not our Savior. We need a great awakening to the truth and glory of Jesus Christ far more than we need a marriage amendment. Our hope lies in the work of Jesus-for us on the cross, and in us by his Spirit. Be thankful for laws and for courageous political servants, but live for the gospel and the glory of Christ (Mark 8:35).