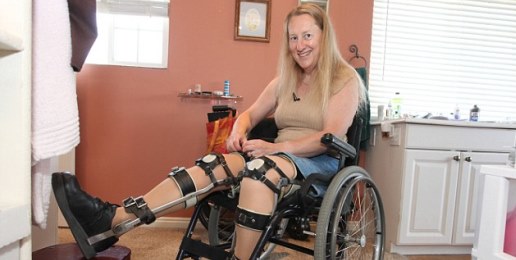 Chloe Jennings-White, a 61-year-old research scientist in Utah who was a Fulbright scholar and has a Ph.D. in Organic Chemistry from Cambridge University, has known since she was 4-years-old that she is different. She feels uncomfortable with her normal, healthy, fully functioning body. She experiences a mismatch between her physical body and her mental image of her body. In an effort to achieve consonance between her body and her “identity,” she has engaged in risky activities and self-harm, hoping that injuries would result in the type of body with which she identifies. For years in private, she used props to pretend she had the body she wanted, but now she engages in these behaviors publicly.

Chloe Jennings-White identifies as a paraplegic and is part of the “transabled” community. She suffers from Body Integrity Identity Disorder (BIID), and careens about in a wheelchair wearing leg braces. Jennings-White reported that in 2010, she found a doctor overseas who was “willing to help her become disabled by cutting her sciatic and femoral nerves, but she could not afford” the $25,000 cost.

Oh, I almost forgot. In addition to identifying as a paraplegic, Jennings-White identifies as a woman. Chloe Jennings-White is, in reality, a man, formerly known as Clive. (Interestingly, according to a 2011 study, 25% of those who suffer from BIID identify as homosexual, while homosexuals constitute only 1-3 % of the population.)

While most people who suffer from BIID identify as amputees and desire a limb amputated, some, like Jennings-White, identify as paraplegics. Still others identify as blind persons, as is the case of 32-year-old Jewel Shuping who ten years ago was able to persuade a psychologist “to pour drain cleaner into her eyes…an excruciating process that took six months to fully take her sight.”

Dr. Michael First, a Columbia University professor of psychiatry, sees gender dysphoria as an apt though imperfect analogue for BIID:

“When the first sex reassignment was done in the 1950’s, it generated the same kind of horror that voluntary amputation does now….It’s one thing to say someone wants to go from male to female; they’re both normal states….To want to go from a four-limbed person to an amputee feels more problematic.”

The medical community—though not all of its members—has decided that amputating healthy breasts and testes and providing sterility-inducing cross-sex hormones constitutes medicine, while amputating an arm is quackery. Isn’t that judgmental and “transabled-phobic”?

Second, with regard to gender dysphoria (and unlike BIID), the medical community has been politicized by the infiltration, badgering, and bullying of “trans”-activists who have compelled the medical establishment to at least publicly assert that the desire to be the opposite-sex is not a psychological disorder.

Don’t take my word about the political pressure effecting such a change. “Julia” Serano, a male “trans”-activist who pretends to be a woman, recently admitted as much. He said that our healthcare system is “gradually becoming our contemporary trans healthcare system” an “evolution” that was brought about in part by “trans activists ‘f***ing sh*t up’….[T]his change was facilitated by a more general trend within research and medicine — away from the paternalistic ‘Doctor Knows Best’ attitudes of the mid-twentieth century, towards today’s recognition that practitioners and researchers need to actually be concerned about, and seek feedback from, the communities that they serve.”

The medical malpractice masquerading as “treatment” for those who suffer from gender dysphoria is actually fashioned out of the remnants left over from the Emperor’s new clothes, and the flimsy garment is unraveling before our eyes as research fails to support the claims of “trans”-activists and as more and more people experience “sex-change regret” and “de-transition.” Tragically, what is exposed is mutilated bodies (more on that in a coming article).

Even though BIID-sufferers report “depression, frustration, and ‘constant consuming agony,’” the medical community still opposes what I guess should be called “transabled-identity confirmation surgery.” Well. it’s opposed for now. Just wait till “transabled” activists learn some lessons from the “transgender” community and kick their badgering into high gear.

Maybe President Barack Obama could tell us whether public school students who “identify” as amputee-fluid should be allowed to park in handicap spots, use wheelchair-accessible facilities, and be provided with extra time during passing periods on the days they’re feeling limbless.