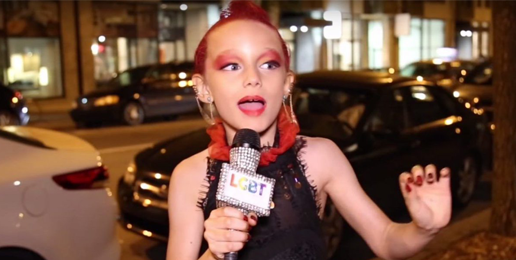 The culture is mainlining poison into the veins of children, and no one is protecting them. As parents facilitate the poisoning of their own children and post their crimes on YouTube, no one is rescuing the little ones.

The perverse cross-dressing antics of preteen boys like “Desmond the Amazing” and “Lactatia” are facilitated by their parents who parade them around like freaks for the amusement of adults who attend draq queen events. Immersed in depravity, these little boys are robbed irrevocably of their innocence. And there’s no one to restore to them that which all young children deserve: a life free from adult turpitude.

“Lactatia,” whose real name is Nemis Quinn Mélançon Golden, is a 10-year-old boy who started dressing and performing in drag at 8 years old when he watched RuPaul’s drag show with his mother’s blessing.

In the service of advancing his career as a drag queen, “Lactatia” takes “voguing” classes. For those uninitiated in the ways of drag queens, voguing is the exaggerated, effeminate strutting, sashaying, and arm-flailing that characterize drag queen performances and were popularized by Madonna. “Lactatia” hopes to be a draq queen for his entire life and believes it “should be an all-ages thing.” His mother, Jessica Mélançon, supports his dreams.

Here is a video of “Lactatia” at a RuPaul drag queen convention asking attendees if they are followers of his, which he calls “Lactaters”:

And this is an Elle Magazine interview with “Lactatia” and his mother in which he is surprised by a visit from adult drag queen Vivacious who offers him performance tips:

Wendylou Napoles, another feckless perversion-facilitating mother, supports her 10-year-old son Desmond in his drag queen aspirations. His drag persona, “Desmond is Amazing,” first came to the public’s attention in 2015 when he marched—or rather “vogued” in the New York City “pride” parade to the cheers of the sick crowd. A video of his unfortunate performance went viral, and his career as an exploited child-transvestite took off.

Desmond now has an Instagram account on which he posts photos of himself in drag as well as a Facebook page that has no normal little boy photos. He recently announced his plans for a virtual club that will be a “positive, encouraging, and safe online community for all drag kids to connect with one another.” Does anyone believe a fifth-grader would on his own come up with such an idea?

In a June 2017 interview in Out Magazine about Desmond’s “premature fabulousness,” Desmond’s mom, who admits to taking him to the NYC pride parade every year since he was about “four or five” and to buying his drag outfits for him, said she has known for “a long time” that her 10-year-old son is homosexual.

In another Out Magazine interview in October 2017, Ms. Napoles claims Desmond had his first crush at age seven on Jinkx Monsoon, an adult drag queen he saw on RuPaul’s drag show—yes, the same show that introduced drag to “Lactatia.”

Is that really what Desmond experienced? A crush on an adult? How many seven-year-old boys have crushes on adults?

Not quite a month ago, Desmond appeared on three episodes of the YouTube show called Pe-eew! which is described as a “stinky, sit-down comedy talk show satire” hosted by two homosexuals, one of whom is 51-year-old Michael Alig. Alig was the premier “club kid” in New York City in the 1980’s and 1990’s. In 2014, Alig was released from prison after serving 18 years for murdering his friend and drug dealer Andre “Angel” Melendez, leaving Melendez’ rotting body in his bathtub for 8 days, dismembering him, and throwing the dismembered body into the Hudson River. This month’s Rolling Stone Magazine profiles Alig’s pathetic attempt to return to the club scene following the end of his parole last month:

No more house inspections or pesky curfews. Alig is back, trying to regain the fabulousness he lost while locked up…. Alig… truly believes that nightlife is still his calling.

In this Pe-eew! episode (click here), Alig and homosexual co-host Eric Glam ask Desmond about his pink lace and bejeweled hand mirror. Desmond describes it as his “Richie Rich” mirror, following which Alig and Glam start smirking and bantering about Richie Rich. No, not the Richie Rich a little boy should be talking about. They were talking about former club kid and fashion designer homosexual Richie Rich.

Wearing silver girl’s sandals and a tiara, Desmond appears in this video for Refinery 29, “a media and entertainment company that helps women see, feel, and claim their power,” to talk about his life philosophy and fashion.

Not so long ago, parents would likely have lost custody of their children for doing the things these mothers are doing. Today they’re celebrated by many on the Left. It’s hard to take seriously the moral outrage of Leftists over the abuse of adult women by adult men (#MeToo campaign) when they say nothing about this kind of egregious and very public abuse of children.

“It would be better for him to have a millstone hung around his neck
and to be thrown into the sea than to cause one of these little ones to stumble.”
~Luke 17:2~