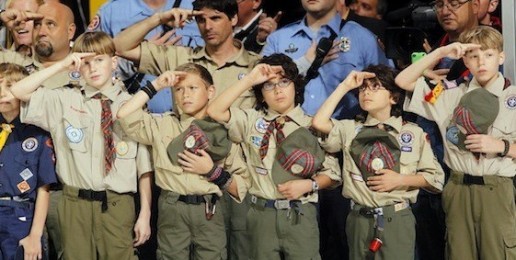 As a manipulative political stratagem, the Left propagates the notion that the normalization of homosexuality is a cultural inevitability. Belief in this inevitability dispirits conservatives and depletes whatever reservoir of motivation they may have to dissent, thus effectively surrendering the public square to sexual subversives.

It is not, however, inevitable that one day all of society will come to believe that homosexuality is morally equivalent to heterosexuality. God’s truth and wisdom spoken with unequivocal, unashamed forthrightness, courage, consistency, and persistence by flawed people who take seriously the duties of discipleship can make a difference.

Look no further than the decision of the National Executive Board of the Boy Scouts of America (BSA) to postpone the vote on its national policy on homosexuality. It’s fair to assume that vociferous public opposition to the proposal to abandon its national policy prohibiting homosexuals from membership in or leadership of the Boy Scouts was the catalyst for this postponement. We should use this victory to refill our depleting reservoirs.

President Barack Obama in yet another proclamation that defies the God he claims to serve and hurts children, pontificated on the controversial issue:

My attitude is that gays and lesbians should have access and opportunity the same way everybody else does, in every institution and walk of life. The Scouts are a great institution that is promoting young people and exposing them to opportunities and leadership that will serve people for the rest of their lives, and I think that nobody should be barred from that.

That’s a mouthful of obfuscation. What he fails to address is whether organizations and associations have the right to make distinctions between moral and immoral acts. Homosexuality, unlike for example race, is centrally defined by volitional sexual acts that are open to moral assessment. When President Obama refers to “gays and lesbians,” he’s not referring only to people who experience same-sex attraction. He’s referring to people who experience same-sex attraction; affirm homosexual acts as moral and normative; and affirm same-sex attraction, acts, and relationships as central to their identity. If, according to President Obama, those who affirm same-sex attraction, acts, and relationships as moral “should have access” to “every institution and walk of life,” how, pray tell, do those who believe such acts and relationships are immoral exercise their freedom of religion and association?

Does President Obama really mean that “nobody” should be barred from the Boy Scouts? What about those who affirm polyamory or adult consensual incest as central to their identity? What about those who espouse theories of racial superiority? And how does an organization promote moral straightness or fidelity to God if it can’t make distinctions between moral and immoral conduct? (Let’s not forget that God has some rather uncompromising things to say about homosexuality.)

Thanks to the relentless, presumptuous quest of homosexuals to shape the moral views of other people’s children, this Boy Scout kerfuffle is not over. Despite specious claims to the contrary, this battle is not about “equality” or “fairness.” It’s about the desperate desire of homosexuals to eradicate conservative moral beliefs and every last vestige of moral disapproval from the global moral landscape. The proper response to this obnoxious pressure from homosexual activists and corporations—neither of which group is noted for their commitment to God or sexual rectitude—would be for the BSA leadership to honor God and act bravely by publicly affirming that there are objective moral truths from which our sexual lives are not exempt.

When considering the potential for harm to children, set aside for a moment the issue of homosexuals who may prey on the boys under their charge. There is another harm that will be done to all boys whose leaders are homosexual. Those boys will be taught by example the deceit that homosexual acts and relationships are moral. It is unconscionable that an organization committed to God and moral integrity would countenance such destructive role modeling.

Christians must take a stand on this issue. My father, my husband, and my son were Boy Scouts, so it pains me to say this, but if the National Executive Board decides to abandon its national policy on homosexuality, Christians should abandon the Boy Scouts.

Take ACTION:  Click HERE to send an email to the BSA urging its board members to retain its current policy on homosexuality. If the BSA hopes to retain the trust, loyalty, and affection of parents and supporters nationwide, it must unequivocally reaffirm its current God-honoring policy.