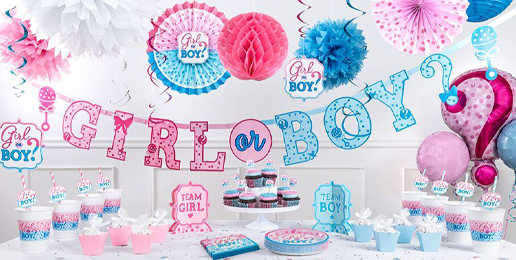 The Audacity of Gender-Reveal Parties: Another Step Towards Cultural Insanity
Written By   |   11.06.18
PRINT

The leaders of the transgender revolution revile the celebrated declaration, “It’s a boy” or “It’s a girl,” when a baby is born. Transgender activists recognize that their revolution cannot succeed until doctors who deliver babies, or ultrasound technicians at women’s cliques, stop labeling babies as a specific gender. The announcement of a baby’s gender, however, still fills delivery rooms and doctor’s offices with excitement. I predict that this practice will continue.

Recently, an article ran in “The Ethicist” column of the New York Times Magazine. The ethicist in this case is Professor Kwame Anthony Appiah. The headline in the article asked, “Should I Go to a Gender-Reveal Party?” The questioner who wrote in for advice posed to “The Ethicist” the following scenario:

“A close relation is pregnant with her first child and is having a gender-reveal party. She is overjoyed with the addition to our family, as am I. However, I am adamantly opposed to attending the gender-reveal party because it violates my moral code. I have worked in activism for my entire professional life and, though I am cisgender, I have strong feelings about gender politics and equality. Gender-reveal parties, where parents and guests learn a baby’s gender together, violate my values because they reaffirm society’s gender binarism and inadvertently perpetuate the stigma against non-binary genders. I know I will never experience firsthand the challenges of being gender-nonconforming, but when I think about how I might feel, I would be very hurt knowing my parents had a gender-reveal party for me before I was born with my incorrect gender. I know the non-binary community faces much deeper, more urgent problems than this hypothetical situation, but even so, I have a moral aversion to helping affirm society’s gender binarism. Should I attend the party?”

This question represents just one more step towards cultural insanity. The questioner cannot fathom nor allow for a party where people celebrate politically incorrect labels like “boy” and “girl.” Such a party violates the moral code of the transgender movement.

Indeed, the moral unction behind this question is breathtaking. Scenarios like this come, not on the leading edge of a moral revolution. Rather, the moral revolution must have made significant gains before an ethics column in the New York Times Magazine begins to get letters with this kind of moral outrage at a gender-reveal party.

Christians thinking about this moral confusion must first stop at the vocabulary used in this article—particularly the word, “cisgender.” Using that term plays into the entire gender revolution. The term indicates that someone born a male is quite comfortable with being male. Even adopting the vocabulary, therefore, becomes an enormous problem because the vocabulary assumes that you accept the ideology of the transgender revolutionaries—that gender fluidity exists and that the gender assigned at one’s birth may or may not be factual. “Cisgender” signifies that you buy into the idea that all of humanity must be identified on a spectrum, with cisgender at one end and gender-nonconforming, or, transgender at the other end.

Secondly, Christians need to note the kind of moral outrage indicated in the question. The questioner, filled with indignation, lashes out at a set of parents who had the audacity to throw a gender-reveal party—a party that apparently does nothing more than perpetuate binary stereotypes. Indeed, according to this article in the New York Times Magazine, gender-reveal parties could damage relationships between parents and their transgender children who find out that mom and dad threw a party which revealed an “incorrect gender.” This argument asks the reader to make incredible leaps in logic and to possess an imaginative framework which obfuscates all reality.

But here’s the third thing we come to understand about this article: It tells us that the writers, editors, and publishers of the New York Times Magazine believe that these are the kinds of questions we should be concerned about and that we too should experience the confliction, indeed, the outrage present in the question posed to “The Ethicist.”

The question, by itself, poses enormous problems and reveals the erosion of any sane ethic. The answer to the question, however, reveals the extent of this moral erosion. Professor Appiah, who currently teaches at New York University, responds to the questioner by saying, “First, let’s distinguish between two different issues. One is what you’re calling gender binarism—the idea that everyone is naturally either male or female. The other is the fact that trans people will identify with a gender other than the one they were assigned on the basis of their bodily appearance at birth. You could be trans in that sense and still believe in binarism: to say that you were assigned the wrong gender isn’t necessarily to reject the idea that there are two.”

Professor Appiah’s answer takes an interesting turn when he writes that “celebrating the discovery that a baby is a boy or a girl need not in itself stigmatize trans or intersex or non-binary people.” Appiah went on to say, “A parent celebrating the coming birth of a girl could be someone who’d be perfectly happy if the child turned out later to be a boy or neither a boy nor a girl. Indeed, as it becomes easier to identify intersex people prenatally, you could one day imagine having a party that revealed that the child was neither male nor female. And people who do have a hard time dealing with gender-nonconforming people aren’t likely to have their minds changed by the disappearance of gender-reveal parties.”

At certain moments, it appears that a society inches its way right up to the edge of a cliff. At other times, however, you see an argument that sprints towards the edge and leaps right off. That’s exactly the direction Appiah takes his answer.

Appiah goes on to state, “If there’s a problem with these parties, it’s mainly that they encourage the idea that gender is fixed in the womb and by your body. Let’s call that biological determinism about gender. The science in this area is very much a work in progress. But, we already know that gender identification isn’t fixed by your sexual organs and that the social meaning of gender is informed by culture.” Appiah makes a generalized, unsubstantiated claim that rejects any argument that would question his premise. He says that “we already know that gender identification isn’t fixed by your sexual organs.” Appiah’s reasoning demonstrates how the sexual revolution, through moral coercion, creates a change in an entire mentality and worldview. Appiah’s argument enshrines the principles of sexual revolutionaries who make audacious and radical assertions based solely upon the authority of the gender revolution. Anyone who dares to disagree with this unassailable authority represents an antiquarian ignorance and bigotry which must be eradicated.

Again, effectively upping the ante of political correctness, Professor Appiah responds to this questioner by saying that “many aspects of gender are not… biological. You can’t necessarily read from people’s bodies what their gender means to them.” In other words, biological sex has nothing to do with gender identity.

Gender debates dominate the news these days, dumping with them an incredibly toxic level of madness. While Christians should experience alarm, they should also possess greater awareness of the determination that grips the moral and sexual revolutionaries. Articles like this one in the New York Times Magazine, and arguments like Professor Appiah’s, demonstrate the unceasing desire of the LGBTQ agenda to invert civilization itself. As relentless as they might be, the moral revolutionaries aim at insanity and position arguments as reality that have no basis in any scientific court or, for that matter, common sense. Indeed, as demonstrated in Appiah’s argument, the sexual revolution hinders any serious inquiry into sexuality and blatantly obfuscates fundamental questions about the “research” advertised to the public as the new law which must govern opinion, policy, and morality.

We live in a society that has set off a massive chain reaction of confusion. Christians, however, equipped with a biblical worldview and empowered by God’s grace, can clear up the confusion, address the insanity, and promote true human flourishing.

This article was originally published at AlbertMohler.com