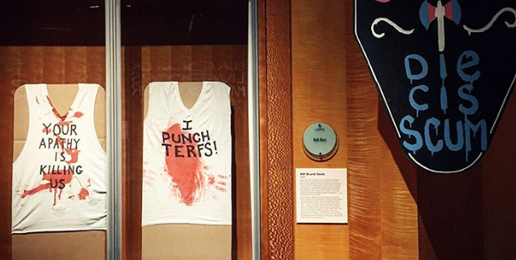 I’ve personally met many trans men I’m attracted to. If genitals determine how you feel about someone, you’re transphobic.

To be clear in this shifty, slippery, imaginary, alchemical world in which cross-sex identifiers live and move and have their being, “trans men” are biological women, also known as women.

Ford’s tweet provided yet more evidence of the growing schism in the LGB/T alliance, a schism of which many remain unaware.

“Gender critical” feminists, many of whom are lesbians, have been at the forefront of the schism, and for their justifiable objection to the presence of biological males in women’s private spaces and athletics, the “trans” community has turned on them with stunning viciousness. Within the “trans” community, it is primarily biological men who pretend to be women (henceforth referred to as pretend-women) who view gender critical feminists as quislings worthy of death.

In their quest to impose a totalizing and totalitarian ideology on all of society, pretend-women have done what “progressives” do best: manipulate language—a strategic phenomenon George Orwell called Newspeak. Pretend-women invented the epithet “TERF” to hurl at feminists who believe the ontological status of “woman” should not be appropriated by biological men, also known as men.

Gender critical feminists (as well as women who do not embrace second wave feminism), believe such appropriation erases women, violates their intrinsic right to be free of the presence of biological males in spaces where girls and women engage in personal bodily functions and undress, and puts at risk the physical safety of girls and women.

[W]e believe that it is our biological sex and our biological sex alone that makes us women. It is not the gender stereotypes that we are socialised to associate with womanhood. It is not the “empathy” or outward expressions of femininity like how we dress or style our hair. Our POTENTIAL to become pregnant is a core part of our femaleness and it is central to a lot of the experiences women have in common…. [I]t is in fact proponents of gender identity ideology who are gender essentialist. After all, it is they who think gender is so innate that someone can be born in the wrong body. They conceptualise gender as a kind of soul that exists as separate from the biology of the person. Is it not terribly gender essentialist to suggest that a man who feels an innate sense of ‘womanness’ because he is (perhaps) empathetic, nurturing, gentle, sensitive, and presents femininely, must actually be a woman? Because no man could possibly possess those characteristics and present in that way? Rather than embrace the feminine man or the masculine women, gender identity ideology would have them switch place to ‘match’ their gender identity to the ‘appropriate’ sex.

For refusing to genuflect to pretend-women, sex essentialists are branded TERFs. TERF stands for “trans exclusionary radical feminist,” and it is not a neutral descriptor. It is a hateful pejorative often accompanied by obscene and violent threats. In 2014 and 2015, gender critical feminists created a website on which they posted tweets from pretend-women about “TERFs” that are not for the faint of heart or decent of mind but are worth being aware of because they offer a glimpse into the dark side of a dark cultural movement.

In May 2018, the San Francisco Public Library had a shocking exhibit by the Degenderettes, pretend-men who hate “TERFs.”

Until recently, the LGB/T schism was largely driven by the efforts of gender critical feminists but recently evidence suggests that even male homosexual activists are joining the fight against at least some of the cultural goals of the “trans” cult.

In an open letter to the “LGBTQ” activist organization Stonewall UK, its founder Simon Fanshawe and 21 other homosexual “rights” activists expressed their opposition to the sexual integration of female private spaces. Reality can’t long be denied:

Last October a group of LGB rights supporters asked Stonewall to ‘commit to fostering an atmosphere of respectful debate rather than demonising as transphobic those who wish to discuss, or dissent from, Stonewall’s transgender policies.’ Since then, Stonewall has refused repeated requests to enter into any such dialogue…. We believe it has made mistakes in its approach that undermine women’s sex-based rights and protections. The most worrying aspect of this is that all primary-school children are now challenged to review their “gender identity” and decide that they may be the opposite sex if they do not embrace outdated gender stereotypes…. If Stonewall remains intransigent, there must surely now be an opening for a new organisation committed both to freedom of speech and to fact instead of fantasy.

The demise of the incoherent, science-denying ideology that is confusing and harming children, and will, if permitted to metastasize, violate the privacy, speech, and religious rights of countless people, is being hastened by the schism in the LGB/T alliance. How remarkable it is that so few Christians who should know truth lack the wisdom or courage or both to speak publicly against an ideology that will stain the landscape with the tears of the sterilized and mutilated.

This article was originally published at SalvoMag.com