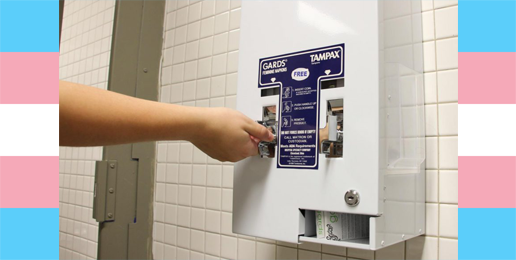 While patriots around the country spent the weekend paying tribute to soldiers who died to preserve our God-given liberties, Illinois Democrats took advantage of the holiday to ruin Illinois further by paying tribute to “trans”-cultists. Democrat lawmakers hoped Illinoisans would be too busy honoring our servicemen and women to notice the repugnant legislation they were passing.

On May 20, 2021, the Illinois House passed an amendment to the school code, and then on May 31 when few Illinoisans were paying attention, the Illinois Senate passed it as well. This amendment (HB 156) expands the availability of free (taxpayer-funded) feminine hygiene products from all girls’ bathrooms in public schools to all boys’ bathrooms. It replaces all occurrences in existing school code of the word “feminine,” as in “feminine hygiene products” with the word “menstrual.” Now the bill goes to Governor J.B. Pritzker who can be counted on to sign every piece of garbage legislation that morally corrupt Democrat lawmakers send his way.

The “Tampons for Boys” bill requires every restroom in public schools that serve grades 4-12 to make available feminine hygiene products for free in all boys’ bathrooms. Remember, grades 4 and 5 are in elementary schools, so boys in grades K-3 will also be exposed to tampons and sanitary pads in their bathrooms. Such exposure will reinforce the leftist gender theory (i.e., “trans”-cultism) that Democrats just passed a bill requiring to be taught in elementary schools.

In a couple of hilarious exchanges between the science-denying chief senate sponsor of the “Tampons for Boys” bill, State Senator Karina Villa (D-West Chicago), and Republicans who asked why boys’ bathrooms need to be equipped with free tampons, Villa robotically replied multiple times “for emergencies.”

These tenacious Republicans persevered and finally with an assist from State Senator Celina Villanueva (D-Summit), the two of them came up with one implausible emergency scenario that—they believe—justifies spending thousands and thousands of dollars to make feminine hygiene products available in every boys’ bathroom in every public elementary, middle, and high school in Illinois.

Here’s what the two pudd’nheads came up with: One day, there may be a female athlete who is participating in a competition held at another school at which the visiting girls’ team has to use a boys’ locker room. This girl may suddenly begin menstruating and, therefore, would need tampons available in the boys’ locker room.

Yep, they actually said that on the Senate floor.

No one bothered to ask whether it’s likely that no teammates would have any tampons or why a girl in this predicament couldn’t dash momentarily into the girls’ locker room or into a nearby girls’ restroom to obtain the necessary feminine hygiene product.

But, of course, everyone knew what this bill is really about, and it’s not about unlikely menstrual crises in boys’ locker rooms during athletic competitions. It’s really about expensive genuflecting to the “trans” cult, and finally the truth came out. Villa fessed up:

According to the American Journal of Medicine, 41% of folks who are transgender, have thought or attempted suicide. I don’t want to keep speaking around the subjects that you all are wanting me to talk about, because it wouldn’t be fair. It wouldn’t be fair to the kids that I’m standing here to help normalize life for. … they should be able to go in the bathroom, and get the product. That’s it.”

Illinois Democrats are forcing all Illinoisans to pay to retrofit every boys’ bathroom in every public school in order for menstruating, cross-dressing girls who don’t belong in boys’ bathrooms to be fortified in their delusion. And Villa is forcing this public expenditure in order to “normalize” disordered thinking and unethical practices.

It was not just women who made foolish statements, though. State Senator Christopher Belt (D-East St. Louis) made one of the most head-scratching comments:

[I]t doesn’t emasculate a man to know … a sanitary napkin dispenser is in a bathroom. … God forbid, we go to Walmart or Target and push down an aisle of sanitary napkins with our five-year-old son and expose them to all of the things that we’re dying about and having a fit about on this floor.

It’s not just curricula that teach. Policies and practices teach as well. Leftists know that. Get your kids out of government mal-education camps yesterday.