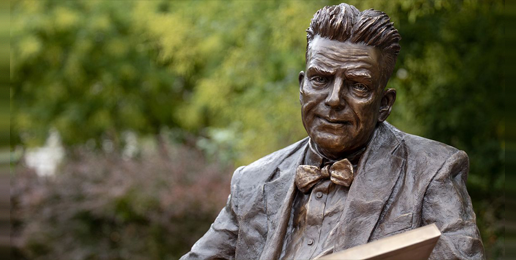 On September 9, 2022, Indiana University (IU) issued a press release announcing that in honor of the 75th anniversary of the Kinsey Institute, the university has installed a life-size bronze statue of entomologist and pervert extraordinaire Alfred C. Kinsey after whom the Kinsey Institute is named.

Demonstrating the astonishing ignorance of leftists, the press release says,

The sculpture’s installation on the Bloomington campus demonstrates the university’s pride in the living legacy of research and academic freedom Kinsey helped to forge and the institute’s ongoing commitment to equity regarding sexual diversity established by Kinsey’s research.

Demonstrating a risible absence of irony, Justin Garcia, executive director of the Kinsey Institute, said this—I kid you not:

Dr. Kinsey left us with the extraordinary legacy of his endless scientific curiosity, his unwavering commitments to academic freedom and his passion for understanding humanity’s sexual diversity. … This spectacular sculpture honors Kinsey’s international scholarly and public impact.

I would agree if by “spectacular,” Garcia means “of, relating to, or being a spectacle.”

Having a life-size bronze sculpture of a creeper/criminal who self-identified as a serious scholar is definitely a spectacle and one wholly unworthy of any institution committed to “Lux et Veritas—”Light and Truth.”

Here are some of the salient features of Kinsey’s salacious life and research:

American historian and art critic Kelly Grovier writing for the BBC about the BLM rioters who went on a statuary-destruction tear offers this about the meaning of statues:

From their earliest inception … statues were … less about the individuals they depict than about how we see ourselves.

Clearly, Kinsey represents favorably how many Americans see themselves.

While the Founding Fathers, whose statues were defaced or torn down in 2020, were men with moral blind spots, it was not their moral failings that were honored. Today’s Americans don’t see themselves in or seek to honor the moral failings of Thomas Jefferson. No, it was the wisdom and noble efforts to create a more perfect union that Americans honor through their statues of the great men of American history. In their statues, Americans see an aspirational picture of themselves and the country that has been a beacon of light to millions.

In contrast, Kinsey’s depravity is not a moral blind spot that his fans overlook. His depravity is what they celebrate. Kinsey is like Harvey Milk in that regard. Both men are honored by leftists because of their depravity–not despite it.

Just how engrained that instinct is – to perceive an aspect of oneself in the image of another – is impossible to measure. Such an impulse may explain why it is so agonisingly difficult to tolerate the persistence of memorials that venerate past masters of pain. Theirs is a suffocating weight. The outrage that many feel about having to share the streets with such hulking ghosts of oppression is deep and crushingly real.

A statue of Kinsey—the abusive father of the sexual revolution and, therefore, master of incalculable pain—is agonizingly difficult to tolerate. His statue is a suffocating weight. The hulking bronze ghost of Kinsey is a painful reminder of the suffering of the many victims—the slaughtered unborn, children without mothers or fathers, single parents, and children whose minds are being deceived and bodies mutilated—of Kinsey’s sexual revolution.

While repugnant, perhaps the bronze statue at the public Indiana University honoring Alfred Kinsey fits the repugnant contemporary era leftists have socially constructed in America where our public schools train up children in the ways sexually perverse leftists want them to go. At the same time, it is a grotesque reminder of the human suffering Kinsey has caused.