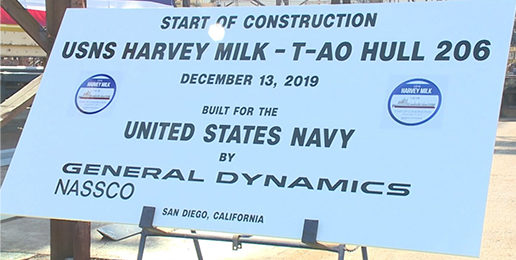 On Friday, December 13, 2019, the San Diego Union-Tribune reported that construction had just begun on a Navy ship named the United States Naval Ship Harvey Milk (USNS Harvey Milk) after the pederast Harvey Milk. You read that right. The U.S. government is honoring an “ephebophile”—that is, an adult male who is sexually attracted to pubescent boys—whose only claims to fame are having had sex with teen boys and men and having been murdered by a disgruntled co-worker. While national memorials to historical figures who engaged in racism are torn down, and the #MeToo movement grows, leftists promote multiple government-funded memorials to a promiscuous homosexual pederast.

Openly homosexual journalist Randy Shilts, author of The Mayor of Castro Street: The Life and Times of Harvey Milk, wrote about Milk’s sexual relationship with 16-year-old runaway John “Jack” Galen McKinley when Milk was 33 and living in New York City:

Within a few weeks [of his arrival from Maryland], McKinley moved into Milk’s Upper West Side apartment. … Milk kept his sexuality a closely guarded secret at work. Only one person managed to break the barriers between Harvey’s personal and professional life, and it wasn’t by Milk’s own choice. Jim Bruton, a Bache vice-president, met Milk when Harvey approached him for authorization to open an investment account as a guardian for a younger man who was his ward. Bruton … looked Milk sternly in the eye.

“What’s this guardian crap?” he asked. “What you’re really talking about is opening an account for the boy you’ve got living with you. Right?”

… Bruton was surprised to learn that his gregarious colleague had few close friends, lavishing virtually all his affection on his lover, Jack McKinley.

Milk violated New York’s age of consent law with a teenage boy, which constituted a Class E Felony, and our military is honoring him.

Milk, long-deified by the left as a homosexual hero, was the first openly homosexual San Francisco Board Supervisor who, along with Mayor George Moscone, was murdered by colleague Dan White after an unremarkable 10 months in office. Milk was not a martyr for the cause of normalizing sexual deviance—as Hollywood and homosexual activists would have America believe—and Dan White did not murder him because he—White—harbored anti-homosexual bigotry.

White, a San Francisco Democrat like Pelosi and his two murder victims, resembled neither a “New Right” figure nor a raging homophobe. Politically, he resembled Dianne Feinstein, who served as White’s mentor on the board of supervisors. … All these years later, Feinstein—not Bill Dannemeyer or Bob Dornan—possesses Dan White’s diary. The association between the two figures upends the narrative portraying White as a right-winger out to settle ideological scores.

White delivered the keynote address at the California Coalition for Handgun Control’s 1977 annual meeting. Like Feinstein, he supported gun control. … As a supervisor, he voted for an aggressive affirmative-action policy that evaluated those in city management by how many minorities advanced under their leadership. On the board, the former cop and fireman essentially served as the representative of the city’s public-employees’ unions. …

The first person White hired in politics was a gay man, who served as his campaign manager and later his chief of staff and business partner. “That was never an issue,” Ray Sloan told me in an interview for Cult City: Jim Jones, Harvey Milk, and 10 Days That Shook San Francisco. “In coordinating his campaign, I don’t think anyone knew or cared if I was gay. … I sort of lived my own life. As time went on, it was clear that he knew. It just didn’t make any difference to him.”

Milk often joined White for coffee or lunch. Unlike other colleagues on the board, Milk attended the christening of White’s son. When Milk introduced the sole legislation authored by him to become law—a sensible ordinance requiring dog owners to clean up after their pets—White seconded it. But after Milk reversed his support for White’s efforts to keep a home for troubled youth from opening in his district, the troubled White reversed his support for a gay-rights measure important to Milk. Milk perhaps never saw White as an ally, but White clearly saw Milk as such, which led to feelings of betrayal.

During White’s brief time in politics, he sided with Milk on the most important issue involving gay rights. He endorsed “No” on Proposition 6, a ballot measure sponsored by California state senator John Briggs seeking to empower local school boards to fire openly gay teachers. White attended the largest gay-rights fundraiser in the history of U.S. politics at the time to mobilize support against Briggs. …

About a week after Prop. 6 went down to defeat, White abruptly offered his resignation from the board of supervisors. Then the public employees who had worked hard to elect him let him know, at times angrily, that they objected to his sudden decision. Just as suddenly, the mercurial politician asked for his job back. Moscone initially welcomed White back on the board, but the mayor changed his mind after Milk lobbied him to seat someone else and encouraged political players in White’s district to jettison his attempt to regain his seat.

White felt betrayed. More important, he felt as though he had betrayed those loyal to him. A petty man nursing a petty grievance over a petty office murdered Mayor George Moscone and Supervisor Harvey Milk.

“I know why Dan White killed Milk,” board colleague Quentin Kopp explained in an interview for Cult City. “Because Milk was lobbying Moscone not to weaken and not reappoint White to the board. That got around.” Dianne Feinstein, a fellow Democrat who nevertheless disagreed with Kopp on much, agrees with him here. “This had nothing to do with anybody’s sexual orientation,” she reflected ten years ago. “It had to do with getting back his position.” (emphasis added)

The federal government, the state of California, public schools, and now the military have all been duped by Big “Gay” into honoring a deeply dishonorable man. As with Matthew Shephard’s murder, homosexual activists have misrepresented the murder of Milk in order to exploit it for their pernicious political and social purposes.

Navy ships are named by the Secretary of the Navy, who is a political appointee. The blackguard who named the USNS Harvey Milk, Raymond Edmund Mabus Jr., was an Obama appointee with no military background who named another Navy ship the USNS Cesar Chavez.

In 2009, Barack Obama posthumously awarded pederast Milk the Presidential Medal of Freedom, which is awarded for “especially meritorious contribution to the security or national interests of the United States, world peace, cultural or other significant public or private endeavors.” Then beginning in 2010, the state of California began observing Harvey Milk Day on his birthday, May 22. In 2014, the United States Postal Service honored Milk with a commemorative postage stamp. But, for leftists, that’s not nearly enough recognition for Milk’s meritorious contribution to the normalization of sodomy.

In 2016, when the Navy first announced that a ship would be named after Milk, his homosexual nephew Stuart Milk said that naming a ship after his uncle “will further send a green light to all the brave men and women who serve our nation that honesty, acceptance and authenticity are held up among the highest ideals of our military.”

Is “authenticity” really one of the highest ideals of the military, and what exactly does such a claim mean? What if a 13-year-old authentically identifies as a 20-year-old? Would she be permitted to enlist in the Navy?

This same ubiquitous nephew, spoke at a 2012 “ceremonial unveiling of the first street in the nation” named after a known pederast, saying his uncle “fell in love with the beautiful boys here.” Is that what our military now honors?

With his customary stoicism but this time tinged with a barely discernible melancholy, my Navy veteran father John Blackburn who served on the USS Ulvert M. Moore during WWII said, “This isn’t the country I fought for.”

No, it’s not. Our government now praises the perverse, celebrates the corrupt, and decorates the depraved.

Why aren’t Americans beating down the doors of their U.S. Senators and Representatives, demanding that no military vessel be named after an adult man who had sex with minors? I’d like to hear members of Congress defend naming a ship after a pederast. And if the Navy won’t put the brakes on this offensive project, then, in the service of authenticity, the ship should be renamed the USNS Harvey Milk—Pederast.

Take ACTION: Click HERE to express to your federal officials how offensive it is to name a Navy ship after a man who engaged in felonious sexual acts with a minor boy.