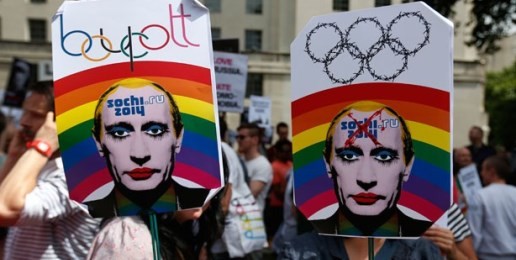 The cacophonous voices of homosexual activists and their ideological allies are getting louder as the Winter Olympics in Sochi, Russia approach. They’re protesting Russia’s new federal law pertaining to homosexuality. Surely, this law must be draconian, reasonable people think, to generate this degree of heat from the ever-fevered “LGBTQQIAA” (that is, “Lesbian, Gay, Bisexual, Transgender, Queer, Questioning, Intersex, Asexual, Ally”) community.

What is often reported in the mainstream press is simply that the law is “anti-gay” followed by reports of anti-“gay” brutality. Few articles include any details of the text of the law and its inoffensive—some would argue wholly appropriate—content. The omission of the text of the law with the concomitant reporting on already illegal physical attacks is a strategic decision intended to distract attention from the actual intent of the law.

In order to put into perspective this newest manifestation of outrage from homosexual activists, let’s look at the pertinent parts of the actual law:

The Code of the Russian Federation on Administrative Offences… shall be amended as follows:

Propaganda of homosexualism among minors –

EXPLANATORY NOTE
…Propaganda of homosexualism in Russia took a wide sweep. This propaganda is delivered both through the media and through active social actions that promote homosexualism as a behavioral norm. It is especially dangerous for children and youth who are not yet capable of a critical attitude to the avalanche of information that falls upon them every day. In this regard, it is necessary to primarily protect the younger generation from the effects of homosexual propaganda, and the present bill pursues this goal.

Family, motherhood and childhood in the traditional, adopted from the ancestors understanding are the values ​​that provide a continuous change of generations and serve as a condition for the preservation and development of the multinational people of the Russian Federation, and therefore they require special protection from the state.

Legitimate interests of minors are an important social value, with the goal of the public policy toward children being to protect them from the factors that negatively affect their physical, intellectual, mental, spiritual,and moral development. Paragraph 1 of Article 14 of the Federal Law № 124-FZ of24.07.1998 “On Basic Guarantees of Child Rights in the Russian Federation” directly states the obligation of public authorities of the Russian Federation to take measures to protect children from information, propaganda and campaigning that harm their health and moral and spiritual development.

In this connection it is necessary to establish measures to ensure intellectual, moral and mental security of children, including the prohibition onto perform any act aimed at the promotion of homosexuality. By itself, the prohibition of such propaganda as an activity of purposeful and uncontrolled dissemination of the information that could harm the health and moral and spiritual development, as well as form misperceptions about the social equivalence of conventional and unconventional sexual relationships, among individuals who, due to their age, are not capable to independently and critically assess such information cannot be regarded as violating the constitutional rights of citizens.

(There is also a local St. Petersburg law that is similar to the federal law but also prohibits the dissemination of resources to minors that affirm pedophilia.)

To further put things in perspective, note that the consequences of violating this law are only fines of $120-150 for individuals, $1,200-1,500 for “officials,” and $12,000-15,000 for “legal entities.” Hardly sounds unreasonable to fine adults $150 for trying to inculcate other people’s children with their subjective beliefs about sexual morality, but nothing angers homosexual activists quite like being denied access to the hearts and minds of other people’s minor children.

Don’t be deceived, the outrage of homosexuality-affirming activists has nothing to do with concern for critical thinking, free speech, or intellectual diversity. Proof for that claim comes from a perusal of resources presented to American teens in their government schools on the topic of homosexuality. The suppression of conservative ideas on issues related to homosexuality is virtually absolute, and the consequences for violating the de facto bans on conservative resources are far more draconian and insidious than those imposed by the Russian law. Paying a $150 fine is small potatoes compared to the kind of personal and professional repercussions that would redound to any teacher in a public school who dared to present resources to minors that articulated conservative beliefs about homosexuality.

To assault people because of their beliefs or feelings is beyond the pale, as is making inflammatory statements that express a desire that others die, experience eternal damnation, or f**k themselves (things that are hurled at any public figure who dares to express moral propositions about homosexuality with which “progressives” disagree). Prohibiting the distribution of homosexuality-affirming resources to minors is both reasonable and wise.

Join us and many other great pro-life advocates at the annual SpeakOut Illinois Conference. This year’s event will be held on Saturday, February 1 at Crowne Plaza O’Hare Hotel in Rosemont. The topic will be “Empowered for Life: Putting Truth into Action.”   Click HERE for more information.