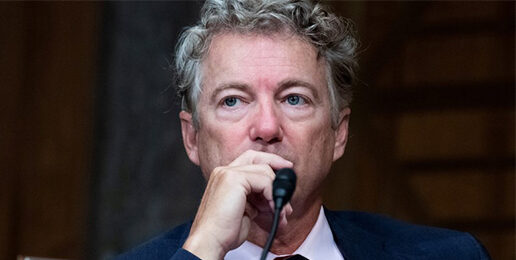 Yesterday, U.S. Senator Rand Paul (R-KY) put to shame every Congressman and Congresswoman who refuses to state publicly and definitively that no medical professional should support cross-sex hormone-doping for minors or the elective removal of healthy parts of their sexual anatomy as “treatments” for disordered feelings about their maleness or femaleness.

The inspiring and courageous statements by Senator Paul occurred in a must-see exchange between Senator Paul and the pitiable Dr. “Rachel” Levine, a cross-dressing male physician whom the pandering Joe Biden has nominated to be his assistant health secretary. Of all the physicians in all of America, Biden chose a psychologically unwell man, and the reason for choosing Levine? Obviously, he was chosen because he masquerades as a woman and calls his masquerade “authentic identity.”

Senator Paul further noted that as with genital mutilation, social forces today play a critical role in forming “trans”-cultic beliefs and practices that harm the bodies of minors:

Genital mutilation is not typically performed by force, but, as WHO notes, by social convention, social norm, the social pressure to conform, to do what others do and have been doing, as well as the need to be accepted socially, and the fear of being rejected by the community.

Evidence increasingly shows that social influences, including both the influence of social media and peers, have profound effects on adolescents, particularly on girls who tend to be more vulnerable to what are called “social contagions” (e.g., repressed memory syndrome, bulimia, and cutting) than are boys.

A study released in the United Kingdom showed that between 2009-2018, there was a 4,515 percent increase in the number of minor girls seeking to “transition,”—a shocking increase that many experts believe is the result of social media providing a distorted lens through which girls are misinterpreting their often normal feelings.

Rather than recommending waiting and counseling to get at the root causes for the confused and disordered feelings of minors, “trans”-cultists and their profiteering allies are recommending experimental medications and surgeries while banning counseling.

Dr. Levine, you have supported both allowing minors to be given hormone blockers to prevent them from going through puberty, as well as surgical destruction of a minor’s genitalia. Like surgical mutilation, hormonal interruption of puberty can permanently alter and prevent secondary sexual characteristics. The American College of Pediatricians reports that 80 to 95% of pre-pubertal children with gender dysphoria will experience resolution by late adolescence, if not exposed to medical intervention and social affirmation. Dr. Levine, do you believe that minors are capable of making such a life changing decision as changing one’s sex?

Note U.S. Senator Paul’s inclusion of “social affirmation,” as a factor that contributes to minors persisting in their rejection of their biological sex. Affirming their delusional thinking through incorrect pronouns and restroom/locker room usage policies harm children.

Instead of answering Senator Paul’s direct and clear question, Levine dodged with a pre-memorized evasion, so Senator Paul tried again:

Let’s be a little more specific since you evaded the question. Do you support the government intervening to override the parent’s consent to give a child puberty-blockers, cross-sex hormones, and/or amputation surgery of breasts and genitalia? You have said that you’re willing to accelerate the protocols for street kids. I’m alarmed that poor kids with no parents who are homeless and distraught, that you would just go through with this and allow that to happen to a minor.

Again, Levine robotically recited the same memorized, evasive non-answer, which revealed that Levine does, indeed, support the chemical sterilization and surgical mutilation of minors who experience sexual confusion, often because of abuse and/or the toxic influence of social media.

Barely containing his justifiable and righteous anger over the destructive ignorance and dissembling of Levine, Senator Paul said what every decent American should be saying publicly and often:

Let it go into the record that the witness refused to answer the question. The question is a very specific one: Should minors be making these momentous decisions? For most of the history of medicine, we wouldn’t let you have a cut sewn up in the ER, but you’re willing to let a minor take things that prevent their puberty, and you think they get that back? You give a woman testosterone enough that she grows a beard, and you think she’s going to go back looking like a woman when you stop the testosterone? You have permanently changed them. Infertility is another problem. None of these drugs have been approved for this. They’re all being used off-label. I find it ironic that the left that went nuts over hydroxychloroquine being used possibly for COVID are not alarmed that these hormones are being used off-label.

There’s no long-term studies. We don’t know what happens to them. We do know that there are dozens and dozens of people who’ve been through this, who regret that this happened. And a permanent change happened to them and if you’ve ever been around children, 14-year-olds can’t make this decision. In the gender dysphoria clinic in England, 10% of the kids are between the ages of three and 10. We should be outraged that someone is talking to a three-year-old about changing their sex. I can’t vote for you if you can’t make a decision.

U.S. Senator Paul’s concluding statement exposed the hypocrisy and dishonesty of leftists. To leftists, the off-label use of hydroxychloroquine for the emergency treatment of a viral pandemic that was killing thousands of people worldwide was unconscionable. Why? Because successfully treating COVID-19 would have helped President Trump.

And who are these allies? Who are the groups that gain from exploiting confused children?

Well, there are the cosmetic surgeons, endocrinologists, pharmaceutical companies, mental health “professionals,” academics, and YouTube “influencers” whose greedy hands are grasping for the filthy lucre the “trans” cult generates for them.

And then there are the pandering politicians like Joe Biden, Kamala Harris, and every member of Congress who are content to say nothing as the bodies of children are destroyed. Children are expendable commodities because, unlike “trans”-cultists,” children have no power.

PLEASE also consider a financial gift to IFI to sustain our work. We have stood firm for 29 years, working to boldly bring a biblical perspective to public policy.