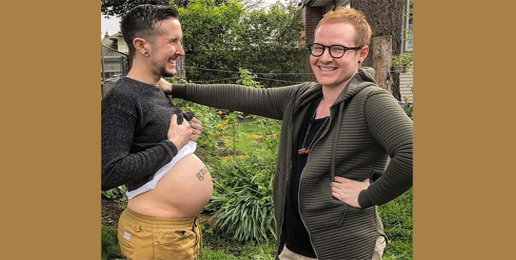 By now, most people have heard tall tales about “pregnant men.” “Pregnant men,” as non-delusional or honest people acknowledge, are fictitious. They don’t exist except in the fertile or deceitful imaginations of “progressives” who live and move in a science-denying unreality the likes of which we find only in primitive civilizations.

Let’s take a closer look at the most recent “pregnant man” to pop up on the pop scene—which, it seems, is the only scene that matters to most Americans anymore.

This “pregnant man” is Trystan Reese, who is now and always has been a woman. As of this writing Trystan is about 8 months pregnant with her male partner John Chaplow’s (aka “Biff”) baby. Since Trystan has retained all of her female body parts, she and husband John got pregnant the old-fashioned way.

In the video in which Trystan explains that she has all her female body parts, she also explains that she has never hated her female body as some men who identify as “trans” do. One thing that is notable in the video is that Trystan has feminine mannerisms. If she were actually a man, some might describe her as effeminate. Trystan claims to be “gay” despite the fact that she is a woman and her spouse is a man, and John claims to be “gay” despite the fact that he is a man, his spouse is a woman, and she has all her woman parts. Apparently, “sexual orientation” is not quite as fixed as homosexual activists have long claimed.

Homo-activists have long claimed the following:

2.)  Since homosexuality is immutable, acting on such feelings is both intrinsically moral. (Only sociopaths actually believe the implicit claim that it is morally legitimate to act upon feelings that are seemingly intractable.)

Homo- and “trans”-activists make generous use of proverbial bait and switch tactics used by unsavory salesmen from time immemorial. While homosexual scholars have claimed that homosexuality is not fixed, homo-activists have been saying it is as fixed as skin color. Now, however, “trans”-activists and even homo-activists are telling us that physical embodiment has nothing whatsoever to do with homosexual attraction, which puts the lie to claims that homosexuals are attracted only to persons of the same sex. In fact, homo-activist Zack Ford, senior editor of Think Progress says that anyone who thinks body parts matter when it comes to sexual attraction is “transphobic.”

Homo- and “trans”-activists are now telling us that body parts, reproduction, clothing styles, hairstyles, makeup, mannerisms, and interests (e.g., dolls vs. trucks, hunting vs. scrapbooking) have nothing whatsoever to do with maleness or femaleness. If that’s the case, if there is nothing differentiating maleness from femaleness, they don’t exist. And if they don’t exist, then there is no reason for all those nonsensical sex-segregated restrooms, locker rooms, showers, dressing rooms, shelters, jails, dorm rooms, nursing home rooms, and semi-private hospital rooms for anyone. There’s no sensible reason to permit them these sex-segregated spaces for even those delusional people who yet believe in the myth of male and female humans. Well, that’s how it goes once you step through the looking glass.

And that’s where “progressives” are leading us baby-step by baby-step.

There is something even more notable in a video Trystan and her parents made 6 ½ years ago for Dan Savage’s “It Gets Better” campaign.  Trystan’s adoring foster sister, who is 9 years older, explains that Tristan was a very happy, much loved little girl until about 4th grade when she started being bullied. The bullying intensified and became relentless throughout middle school. Trystan shared part of her painful story—a story to which many children can relate and which parents like me who were unable to protect a bullied child will find difficult to hear:

“Kids see weakness and they move right in. And I was pretty weak. People stole my backpack. My jacket got flushed down the toilet. My stuff got thrown over fences. People used to hock lugies into my locker, so my stuff was covered in spit and stuff. I was humiliated on a daily basis in public schools…. I didn’t know what to say or do. I didn’t know how to stand up for myself. And I don’t know that I thought I was worthy of being stood up for.”

Fighting back tears, her sister, who had been abused in foster care and group homes, says, “I never really knew the details of what was going on for him [sic] at school, but I knew it was unbearable.”

It was after these years of bullying that Trystan concluded she—who had been a happy little girl and never hated her female body—was a he. Is it possible that the little bullied girl, who viewed herself as weak and unworthy, may have thought if only she were a boy, she would no longer be weak?

Some of the former “trans” men and women about whom I wrote in March explain that they had mistakenly thought they were “trans” when in reality, they were confused. The causes of their confusion included sexual molestation and tragic family deaths. Might another cause be relentless bullying? Might a bullied little girl come to believe that boys are stronger, so if she were a boy, she would no longer be weak?

Some years ago a friend with two young children confided that her husband struggled with a powerful desire to become a woman. Later she told me that when her husband was very young, he had been told to watch his younger 5-year-old-sister while his parents were occupied. He became distracted, and there was a tragic accident that resulted in his sister’s death, overwhelming familial grief, professional repercussions for his father, and terrible social consequences for his family. Her husband continued to blame himself for the accident. It was sometime after the accident that his desire to become a girl began. Neither she nor her husband had ever thought his guilt over his sister’s death might be connected to his subsequent desire to become a girl.

Not all women who wish they were men or men who wish they were women were bullied, suffered tragic losses, or were molested, but some were. “Progressives” fight tenaciously for the right of delusional men and women to obtain falsified birth certificates. They fight to sexually integrate private spaces (thereby violating the privacy of all). They fight for boys to play on girls athletic teams (thereby rendering Title IX impotent). And they fight to prohibit by law counseling that might result in a decrease in suffering in men and women who reject their sex. In so doing, “progressives” never consider that they just may be standing in the way of healing and wholeness.