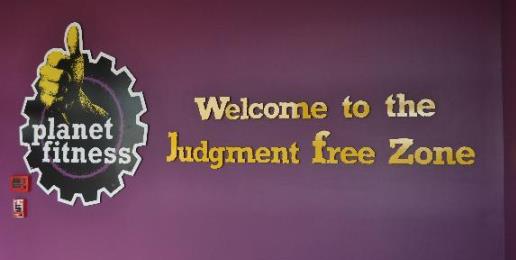 “Woe to those who call evil good and good evil,
who put darkness for light and light for darkness,
who put bitter for sweet and sweet for bitter!”
~Isaiah 5:20

When working out the next week, Cormier warned other women that a man is permitted to use the women’s locker room. For that grave cultural sin, the gym has revoked her membership, asserting that Cormier had violated their “no judgment” policy. Oh, the ironies…

Before expelling her from the club for being “inappropriate and disruptive,” the Planet Fitness corporate office asked Ms. Cormier if she would stop telling other women about the man in the locker room. She properly said “no,” she would not stop. They then judged her behavior to be unacceptable and canceled her membership, issuing this absurdist public statement:

Planet Fitness is committed to creating a non-intimidating, welcoming environment for our members. Our gender identity non-discrimination policy states that members and guests may use all gym facilities based on their sincere self-reported gender identity. The manner in which this member expressed her concerns about the policy exhibited behavior that management at the Midland club deemed inappropriate and disruptive to other members, which is a violation of the membership agreement and as a result her membership was cancelled.

In the service of maintaining a “non-intimidating, welcoming environment,” corporate bigwigs allow a man in a women’s locker room and expel a woman from the gym because she doesn’t want to get naked in front of a strange man. Yes, the man in question was an actual man—you know, the kind born with anatomically correct penises. Even “transactivists” know humans can’t change their sex.

How, pray tell, do club managers verify the “sincerity” of a male member’s or guest’s claim that he wishes to be a woman? And why does sincerity of desire about one’s sex trump the objective state of one’s sex?

And why can’t those who experience apodysophilia exercise in the nude or “diaper fetishists” parade around in Pampers?

Many people are rightly concerned about the possibility that men who don’t suffer from gender-confusion will exploit this inanity in order to access women’s private facilities with permission and peep with impunity. Others worry about assaults by both genuinely gender-confused men or wicked men who have the appearance of sincerely gender-confused men.

Discussions with our children about “private parts,” privacy, and modesty become meaningless if men (or boys) are permitted to use women’s (or girls) restrooms, locker rooms, and dressing rooms? Gender-specific restrooms, locker rooms, and dressing rooms become irrelevant once objective physical embodiment is declared a meaningless, irrelevant social construct.

The Left is trying to say without saying too audibly that biological sex is meaningless or at least subordinate to personal desire. In the inverted, perverted world of Leftist sexuality, neither pronouns nor locker rooms can be allowed to correspond to objective biological sex. Language and locker rooms must submit to the totalitarian dictates of sexual revolutionaries.

By now, sane and honest people should be able to see that these sexual anarchists are really emperors wearing no clothes. And without their clothes, everyone in the locker room, including children, can see their penises.

“Therefore the law is paralyzed, and justice never prevails.
The wicked hem in the righteous, so that justice is perverted.”
~Habakkuk 1:4

Thanks to ‘Transgender Equality’ Laws, Boys Are Now Sharing Girls’ Locker Rooms
b
a
x
r