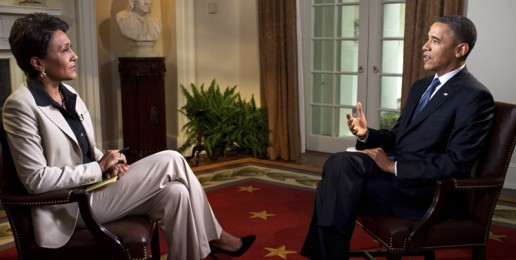 After having done everything in his power to undermine marriage, President Obama has come out of the closet, so to speak, with his announcement that he’s now for brideless or groomless “marriage.” But he didn’t come out alone. He brought Jesus with him, citing Christ as his inspiration for directly attacking God’s moral order. It’s one thing to be a hypocrite, which Mr. Obama has been for years. Since he began pretending to oppose the redefinition of marriage but refusing to defend the federal Defense of Marriage Act while homosexualizing the military. It’s quite another thing, however, to invoke Christ when doing the devil’s work.

Forget the voters. Mr. Obama’s going to have to answer to God for this one. Wednesday’s announcement even might sober up the people who voted for Mr. Obama simply to show that America has overcome racial division. Someone should survey pastors who support Mr. Obama and ask: Which is more important – electing a man on the basis of race or upholding the integrity of the faith and what the Scriptures say about marriage? Citing Genesis 2:24, Jesus said in Matthew 19:5: “For this reason a man will leave his father and mother and be united to his wife, and the two will become one flesh.”

This actually is about much more than marriage. It’s about truth. Mr. Obama is asking us to put into law a requirement for us to recognize as a marriage something that is not a marriage. When you do that, you create the sinews of tyranny, which stretch out to strangle freedom of speech, freedom of association and, eventually, freedom of religion. The virtue of tolerance is strangled, too, morphing into the vice of mandatory celebration.

With this wicked move, Mr. Obama is insisting that we bow down and worship the false idol of sexual anarchy. That’s what his wealthy supporters in Hollywood demand. On Thursday, they ponied up a reported $15 million to his campaign at George Clooney’s pool party. When you accord more respect to liberal film stars and gay billionaires than you do to the Creator of the universe, you’re not leaving much doubt about what you really worship.

No one knows what’s in anyone’s heart. But we are told by the Scriptures to judge people’s actions. Mr. Obama’s marriage gambit speaks louder than his contempt for the free market, the Constitution, American exceptionalism or even fossil fuels.

In the Bible, Daniel refused to bow to a false idol and was thrown into a lion’s den. Same for Shadrach, Meshach and Abednego, who braved a fiery furnace. Christians who refused to worship Caesar were tortured, crucified and thrown to starving lions. Remember that the next time you see a “gay pride” or atheist parade sign or T-shirt that says, “So Many Christians, So Few Lions.”

Some liberals are so mean and unhinged that they openly wish their opponents were dead. In Wednesday’s Washington Post, the far-left cartoonist Tom Toles showed a man holding a book in front of two men. He says, “If anyone here objects to the marriage of these two men, speak up now because opponents are aging and dying off and soon won’t matter anymore.” In the lower right corner, a man at a desk says, “Is it okay to yell ‘hurry up’?”

Sure it is. Liberals can pine for the deaths of people with whom they disagree while complaining about a lack of civility and regrettable “partisanship” in Washington. In liberalspeak, “partisanship” is code for any resistance to the progressive agenda.

But the public may not be going along with the liberal charade after all. In Indiana, primary voters on Tuesday rejected six-term, go-along-to-get-along Republican Sen. Richard G. Lugar in favor of rock-solid conservative and Tea Party favorite Richard Mourdock. West Virginia Democratic primary voters gave a shocking 41 percent of the vote to a Texas convict instead of their party’s incumbent president. In one county, the con got 60 percent. The Post naturally buried this front-page story inside.

In North Carolina, voters approved, by 61 percent to 39 percent, a constitutional amendment defining marriage as the union of a man and a woman. Tar Heel voters ignored many media polls indicating that half of all Americans are now so morally bankrupt they can’t discern any meaningful difference between Ted and Sue and Ted and Fred. Does anyone honestly – regardless of what they say – believe that a wedding without a bride is a real wedding? Nowhere in the world, throughout history, have people been that nuts.

But we don’t have to institutionalize insanity, despite the left’s insistence that it’s inevitable. As North Carolina illustrates, it’s dawning on people that they can love and respect homosexual friends, relatives and neighbors without buying into liberal lies about sex and morality.

Meanwhile, presumed Republican presidential nominee Mitt Romney practically chokes on his lunch when asked about this straightforward moral question. Yes, he “personally” considers marriage to be the union of a man and a woman, but he conveys no moral passion.

So what if homosexual “marriage” became legal first in Massachusetts when he was governor? So what if he issued same-sex “marriage” licenses without legal authority to do so because the marriage statute was unchanged? Not to worry. Because the media keep most people ignorant about how that went down, he can blame the Massachusetts Supreme Judicial Court and its wacky ruling. He’d be at least half right, and on the right side. Go for it, Mitt. Mr. Obama has left you a lot of room on this one.

By offering tepid support for real marriage, Mr. Romney wins the argument by default. Establishment Republicans, mindful of the tiny Log Cabin Republicans and GoProud crowd who could not possibly swing an election but are rich and well-connected, apparently are content to let Mr. Obama self-destruct. At least they aren’t spitting in the face of the Creator as Mr. Obama is.

But they are throwing away an opportunity to appeal to millions of Catholics, blacks and Hispanics who voted for Mr. Obama last time around and would rally to someone else who defends their values without embarrassment.

This article was originally published on May 11, 2012 in The Washington Times.