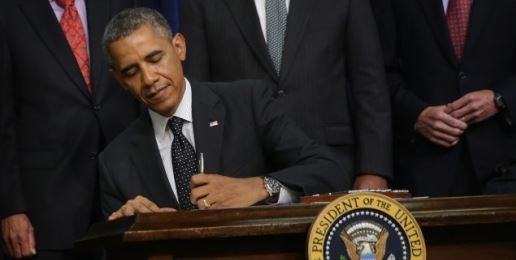 On Monday, President Barack Obama’s lackeys started spreading the word that he would be signing yet another executive order.  This order will prohibit any businesses with over $10,000 in federal contracts from making distinctions in hiring based on the freely chosen behavior of applicants. This is another executive order designed to satiate the insatiable appetite of homosexual and gender-confused activists for special treatment and compulsory affirmation of their dogmatic political and moral ideology.

Since Obama hasn’t been able to get the Employment Non-Discrimination Act (ENDA) passed the old fashioned way—that is, through Congress—he has decided to use an executive order as an end run around Congress. And he’s timed it to secure campaign donations from the homosexual donors who are attending the glamorous “LGBT” gala (no pun intended) taking place in New York City Tuesday evening to honor “LGBT Pride” month and the infamous Stonewall Riots. Nothing says integrity quite like currying favor with purveyors of perversion by abusing executive power.

Businesses that contract with the federal government constitute 20 percent of the work force, and 23 percent of government contracts are earmarked for small businesses, so this executive order (yet another burdensome regulation) will affect not just large corporations. Perhaps Deloitte or Accenture can absorb the loss when potential new clients prefer to take their business elsewhere after meeting a burly, bearded partner  who wears lipstick, falsies, and a floral frock, but what about small businesses?

But imagine if this principle were to applied consistently. Imagine if the government were to insist that employers be prohibited from making any distinctions in hiring based on considerations of any freely chosen actions. Imagine that someone who “identifies” as an “infantilist” and seeks to dress as an infant applies for a job with a small business. Should employers be prohibited from taking such a behavioral choice into account when deciding whom to hire?

Those who are members of the coalition to normalize homoeroticism and gender dysphoria want to carve out a special niche for themselves only, claiming that their disordered feelings, obsessive thoughts about their bodies, and choice of modes of dress constitute an “identity” somehow akin to race, whereas infantilists’ disordered feelings, obsessive thoughts, and strange sartorial choices do not.

“Progressives” have concocted the rhetorical Trojan horse of “identity” (and “orientation”) to smuggle homoeroticism and gender confusion into legal territories where they don’t belong.  “Identity” really just means the aggregate of feelings upon which “progressives” believe are morally licit to act. Nothing more. But by recasting subjective feelings and freely chosen behaviors as “identity” (or “orientation”), the Left has managed to successfully confuse categories of conditions, thereby illegitimately engrafting disordered sexuality (and the volitional behaviors that define it) into anti-discrimination law.

Many believe this executive order will pressure the U.S. House to pass ENDA, which has already passed in the U.S Senate. “LGBTQ” activists who dislike the Senate version because it contains religious exemptions are hoping that Obama’s executive order includes no such exemptions. Their opposition to religious protections should surprise no one. It’s abundantly clear that homosexual and gender-confused activists believe their sexual predilections take precedence over even the First Amendment.

It will be interesting to see which Republicans have the wisdom and courage to speak out publicly and unapologetically against this newest Obama offense.

Take ACTION:  Click HERE to send a message to your U.S. Representative to express your concerns about the frequent and blatant usurpation of the legislative process by the executive branch.  The president should not make law unilaterally.  The U.S. Constitution requires that our national laws be created and approved by both the House and the Senate.