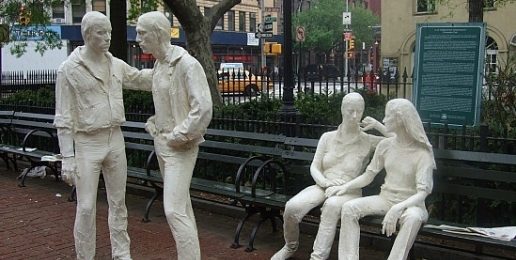 Summer is the season during which countless parents take their children to visit our magnificent national parks. And this is a special year for our National Park Service in that August 25 marks the 100th anniversary of the day President Woodrow Wilson signed the bill that officially recognized the National Park Service.

During this centennial year, President Barack Obama has decided that what the world needs now is a national park dedicated to sexual deviance. In his unbiblical belief that homoeroticism is something to be publicly celebrated, on June 24 President Obama proclaimed that the 1969 Stonewall riot that took place outside a seedy homosexual bar in NYC and which officially marks the start of the social and political revolution to normalize sexual deviance should be commemorated:

“I’m designating the Stonewall National Monument as the newest addition to America’s National Park System….I believe our national parks should reflect the full story of our country, the richness and diversity and uniquely American spirit that has always defined us.”

This proclamation follows as expectedly as dark night follows day from a president who has defaced the White House in the garish and misappropriated colors of the rainbow to honor the destruction of marriage by the five Supreme Court justices. About this defacement, Obama was pleased to say “how good the White House looked in rainbow colors.”

The rainbow, the symbol of God’s promise never to destroy the world for our iniquities, is now the appropriated symbol of the celebration of iniquity. The rainbow has been purloined by the perverse to represent the wholesale rejection of God’s order for maleness, femaleness, sex, and marriage. And our president, who claims to be a follower of Christ, not merely shares in the celebration of wickedness but uses the office established by God-fearing men to promote it.

Does Obama know something St. Paul did not, because while Obama celebrates faux-marriage, the creation of intentionally motherless and fatherless children, and riots in support of body- and soul-destroying sexual acts, St. Paul warns of the eternal consequences of homoeroticism:

“The men likewise gave up natural relations with women and were consumed with passion for one another, men committing shameless acts with men and receiving in themselves the due penalty for their error” (Romans 1:27).

“Do not be deceived: neither the sexually immoral, nor idolaters, nor adulterers, nor men who practice homosexuality, nor thieves, nor the greedy, nor drunkards, nor revilers, nor swindlers will inherit the kingdom of God” (1 Corinthians 6:9-10).

Was Obama’s unseemly act a proclamation of social and political liberation from unjust oppression, or was it the ordination of a gnostic/neopagan monument to the unyoking of sex from truth?