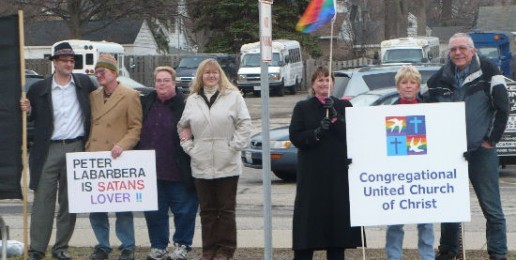 On Monday night, I joined approximately 80 to 90 other concerned citizens in Arlington Heights to listen to pro-family advocate Peter LaBarbera talk about the homosexual agenda and our diminishing freedom of conscience. Peter is the President of Americans for Truth About Homosexuality, an organization dedicated to exposing the homosexual activist agenda.

He did a fantastic job! (Listen to it online or download it HERE.)

As usual, there was a tiny group of homosexual protestors from the Gay Liberation Network. These activists follow LaBarbera to many of his speaking engagements in order to harass and intimidate anyone who dares to disagree with their pro-homosexual propaganda.

Ironically, some in the group chanted “love thy neighbor” while one of their compatriots carried a sign that said “LaBarbera is Satan’s lover.” (See the photos on the right.)

This is the same small group of intolerant, anti-Christian radicals who stood outside Bishop Larry D. Trotter’sSweet Holy Spirit Church on Chicago’s South Side, yelling, “BORN AGAIN BIGOTS, GO AWAY” and other slogans designed to demonize people of faith who, like Trotter, stand up for God’s design for marriage.

This is the same small group who protested Moody Bible Church and Catholic Cardinal Francis George’shome as “Houses of Hate.” Defending biblical sexual morality is not prejudice, and defending natural marriage is not “hate.”

Make no mistake, radical, anti-Christian groups like the Gay Liberation Network would like nothing more than to use the heavy hand of government to censor LaBarbera’s work. They and other leftist groups are working to quash our First Amendment rights to freely exercise our religious faith.