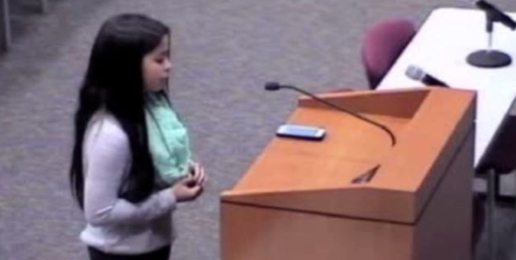 An attorney says evidence indicates a teacher’s instructions in class were clearly a violation of students’ freedom of religious expression.

A seventh-grader in Texas has told officials her teacher gave her an assignment requiring her to say God is a myth – or receive a failing grade. Jordan Wooley told her story before the West Memorial Junior High School Board (see video below). She said students in the class who argued in favor of saying God is real were threatened with punishment.

Brad Dacus of the Pacific Justice Institute contends Jordan’s and the other students’ free-speech rights were violated.

“For any teacher in any public school to require a seventh-grader to disavow their belief in God is a clear violation of not only the First Amendment, the Establishment Clause, the Exercise Clause, and the Free Speech clause – but it’s a clear breech of public trust,” he states.

School officials contend they couldn’t find anyone to back up Jordan’s story, but parents say that’s because they weren’t trying hard enough. As Dacus notes, Jordan wasn’t alone in her accusation.

“The school district reportedly is denying that this took place, yet there was more than one student in the classroom. There were other students – and another girl went home crying to her parents,” the attorney explains.

“The school district can pretend it didn’t happen and they can pretend the exam didn’t exist, but the evidence is compelling to the contrary.”

Superintendent Alton Frailey has since apologized to Jordan. Governor Greg Abbott has invited her to the governor’s mansion this Saturday to share her story.