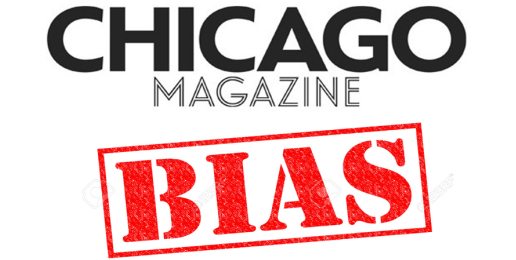 In my eight years with IFI, I have had good experiences with journalists, including even leftist journalists. They have largely treated me graciously and chosen comments from our interviews that accurately represented IFI’s positions on issues. Last week, however, that streak came to a screeching halt. I had an experience that bore out the charges of bias leveled against the mainstream press.

After reading my article on the Chicago Public Schools new “guidelines” that permit gender-dysphoric students and teachers to use opposite-sex restrooms and locker rooms, Bettina Chang, a writer for Chicago Magazine, interviewed me for some twenty minutes on IFI’s views of the guidelines. When her article came out two days later, I was, to put it mildly, surprised.

The bias of Chang is evident not only in the space allotted to quotes from leftists but also in the particular quotes from our 20-minute interview she chose to include and in her remarkable defense of her bias.

Amount of space allotted to leftists vs. conservatives

She used 33 words from The Center on Halsted, 101 words from the Illinois Safe Schools Alliance, 86 words from the Chicago Gender Society, and 75 words from Howard Brown Health. She also paraphrased additional ideas from these organizations.

The 8 words she chose from our interview represented two points, one of which had nothing to do with the substance of the arguments against the use of opposite-sex restrooms by gender-dysphoric students, and the other misrepresented what I said.

To better understand the problems with her article and her defense of it, it’s important to know more about my initial answers to her questions.

I explained that IFI believes restrooms and locker rooms should correspond to students’ objective, immutable sex rather than their feelings about their sex because physical embodiment as male or female is profoundly meaningful and is the source of feelings of modesty and the desire for privacy.

I asked rhetorically why gender-dysphoric boys should be permitted to go to the bathroom, change clothes, or shower with only girls but girls should be denied that right.

I suggested that if curtains and stalls provide sufficient privacy to separate objectively male students from females, then there remains no reason to maintain any single-sex restrooms for any students.

I asked how the Left can be sure that if there is a mismatch between mind and body, the error rests with the body and not the mind.

The only difference between blacks and whites is skin color, which is analogous to eye or hair color. So, would skin color (or eye or hair color) be relevant to restroom, locker room, shower, or shelter usage? Of course not. Even whites have diverse skin, eye, and hair colors. No one suggests that any of those color differences are relevant to feelings of modesty or the desire for privacy. So, any imposed separation was generated not by feelings of modesty or the desire for privacy. Rather, imposed separation of races in restrooms was motivated by racism.

Now with regard to sex, virtually everyone—including gender-dysphoric persons and homosexuals—acknowledge that men and women are substantively and significantly different. When homosexuals claim they are attracted only to persons of the same sex, they are implicitly and necessarily saying men and women are different, and those differences include bodily differences. When gender-dysphoric persons say they don’t want to use restrooms or locker rooms with persons of their same sex, they are saying there are fundamental and significant differences between men and women, and those differences include bodily differences. In fact, the intense desire to have an opposite-sex body is the central desire of virtually all gender-dysphoric persons. They are necessarily saying that their desire to use opposite-sex restrooms is based on those physical differences. They are demanding privacy based on sex differences while denying that privacy to others.

So, from all those comments, here is what Chang wrote:

But acknowledgement remains an obstacle for conservative groups. Suburban-based Illinois Family Institute posted a blog this week decrying the CPS policy. The author, Laurie Higgins, says she does not believe the medical consensus that transgender people are mentally healthy, adding that “physical embodiment” of a sex should dictate bathroom use—though the group has no plans to petition CPS for changes to the policies because “that’s for community members to do,” she says.

While she got IFI’s position correct that we believe restroom use should correspond to physical embodiment as male or female, she conveniently omitted the reasons we believe that. She also omitted the points about the incoherence and inconsistency of the CPS guidelines that I raised through rhetorical questions. She did, however, manage to include six words about the unimportant point that IFI is not getting directly involved in efforts to overturn the CPS guidelines.

Chang’s defenses of her bias

Even more interesting are Chang’s defenses of her imbalance.

First she told me “Sadly my editor has cut down the portion where I quoted you because he wanted me to focus on Chicago-only groups.”

Then she told me this stunner, which oddly has nothing to do with the location of IFI’s office:

[I]n writing the story, I could not ignore that your opinion is based on factual inaccuracies.

We address the question of balance by looking at accuracy as well as representation. It is your personal belief that transgender people are mentally ill, which is why you are against the policy. I think that’s important for our readers to know, and I included that in the article. I asked follow up questions to get a better view of how you came to that conclusion, but the reasoning you provided was too far outside the facts to responsibly report. [emphasis added]

Her rationalization of bias is remarkable for two reasons, the first of which is that I never said that “transgender people are mentally ill.”

Second, Chang is factually and absolutely incorrect when she claims that my opposition to gender-dysphoric persons using opposite-sex restrooms is based on my “personal belief that transgender people are “entally ill.” In point of fact, I told her specifically that IFI opposes gender-dysphoric persons in opposite-sex restrooms and locker rooms because we believe objective, immutable physical embodiment as male or female is deeply and profoundly meaningful and is the source of the desire for privacy and feelings of modesty.

Here’s what I said when she went fishing for a statement from me about the mental health of gender-dysphoric persons: I asked how leftists can be sure that if there’s a mismatch between mind and body, the error rests in healthy, normally functioning bodies. And I said that the highly politicized mental health community is prescribing protocols that do not advance health.

What’s more remarkable still are the opinions of leftists that Chang evidently believes are based on factual accuracies and, therefore, suitable for print:

So much for fair and balanced reporting and intellectual diversity.