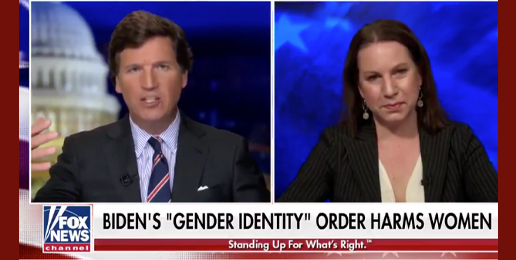 Because the “Equality” Act will erase the category of human formerly known as “women,” it has managed to do the seemingly impossible. It has united conservatives and liberals. While Democrat supporters of the Equality Act, including President Biden, have exacerbated political division, conservatives, feminists, and homosexuals are uniting to defeat this bill, which they recognize as a threat to girls and women.

Earlier this week Tucker Carlson interviewed feminist attorney Kara Dansky, chair of the Committee on Law and Legislation for the Women’s Human Rights Campaign, board member of the Women’s Liberation Front (WoLF), and former senior counsel with the ACLU on the Equality Act. She rightly describes the increasing erasure of women as an “emergency” with many unforeseen consequences that will affect the “rights, privacy, and safety of women and girls.” She warns that the Equality Act, which will “redefine the word ‘sex” to include the nebulous, ill-defined, un-understood, made-up lie that is “gender-identity,” makes a national conversation about these serious consequences imperative.

IFI recommends taking 4 ½ minutes to watch and/or listen to this video interview with Ms. Dansky.

And please, take a moment to speak out to our U.S. Senators: