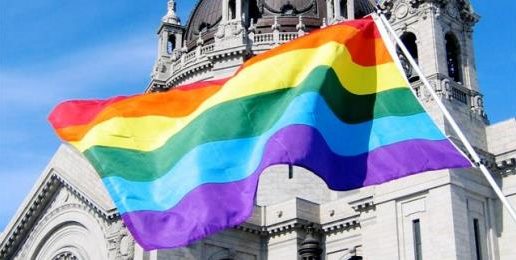 The kind of draconian restrictions of speech and religious rights that corrupt Canadian governance are  arriving bit by corroded bit on America’s church steps sooner than many expected and in, of all places,  Iowa. Make no mistake though, this is coming to every state.

Iowa, like many other states, has a law banning discrimination based on, among other conditions, “sexual orientation” and “gender identity,” in places of public accommodation. To be clear, the rhetorical contrivance “sexual orientation” really means “subjective homoerotic attraction and volitional homoerotic acts,”* and the rhetorical contrivance “gender identity” really means “the subjective desire to be the opposite sex or no sex,” both of which are ontological impossibilities.

Iowa also has a Civil Rights Commission that has issued “guidance” on how the state law and corresponding city codes affect churches. It states that the anti-discrimination law—including its provisions regarding homoerotic feelings and sex-rejection—does, in fact, apply to churches. Fortunately, the Alliance Defending Freedom (ADF) has filed a federal lawsuit on behalf of the Fort Des Moines Church of Christ to prevent the civil rights commission and Iowa attorney general “from forcing Fort Des Moines to use its facility in a way that violates its religious beliefs about human sexuality.”

Here are some of the tricksy ways the Iowa Civil Rights Commission seeks to violate the civil rights of Christians.

The Iowa law banning discrimination based on “sexual orientation” and “gender identity” applies to  places of public accommodation, from which historically churches have been exempt. But inventive (or cunning) Iowa public servants have found a way around that pesky obstacle to their absolutist cultural ambitions. The commissioners write that if any place that is “distinctly private by its nature….offers some services, facilities, or goods to the general public, it will be treated as a public accommodation for those services,” and, of course, church services are open and offered to the general public. By that very act of opening church services to all, churches—in the opinion of the Iowa Civil Rights Commission—become subject to Iowa’s anti-discrimination law and vulnerable to lawsuits for non-compliance.

For those still baffled by the commission’s gaseous emanations, the commission provides two specific examples of church activities that because of their public nature are unrelated to a “bona fide religious purpose” and, therefore, “subject to the law’s provisions”: “a child care facility operated at a church or a church service open to the public.”

The commission warns that churches that offer services open to the public must allow sex-rejecting men and women to use opposite-sex restrooms or risk lawsuits. According to the commission, the law and city codes require that “ndividuals [be] permitted to access… [restrooms, locker rooms, and living facilities] in accordance with their gender identity, rather than their assigned sex at birth, without being… questioned.”

Big Brother is stomping across the Iowa cornfields belching that church restrooms should no longer correspond to objective, immutable biological sex, but henceforth should correspond to the strange, subjective feelings of those who believe sex per se has no intrinsic meaning. Such a moral claim, however, is based on prior assumptions about the meaning of sex, modesty, and privacy—assumptions that contradict Scripture.

According to the commission, “illegal harassment” could include “repeated remarks of a demeaning nature…demeaning…stories…and intentional use of names and pronouns inconsistent with a person’s presented gender.” Would the story of Sodom and Gomorrah be a demeaning story? Could a pastor’s exposition of Leviticus 18:22 or 20: 13, or Romans 1: 26-27, or 1 Corinthians 6:9 be construed as “remarks of a demeaning nature”? If a pastor uses the man formerly known as Bruce Jenner as an illustration in a sermon and refers to him by the grammatically correct male pronoun because Jenner remains to this day male, could the pastor be fined or jailed?

Let that sink in for a moment: The government is intruding into sacred space to force Christians to lie in violation of their religious convictions. Astonishing. The government has passed a law that bans “demeaning remarks” and compels lying thus violating First Amendment speech and religious protections. The left has long sought to scrub the public square of religion, but now the poisonous tentacles of “progressivism” are slinking into even our sanctuaries.

Churches may be exempt from Iowa’s anti-discrimination law when it comes to hiring a pastor—which means churches may discriminate based on a candidate’s embrace of a homosexual or “trans” identity—but if, in a church service open to the public, pastors preach sermons based on theologically orthodox beliefs about homosexuality or if churches require that restroom-usage corresponds to objective sex, churches risk lawsuits. Leftists will no longer allow religious purposes to remain unmolested by anti-biblical, Caesarist policies even within church buildings unless those buildings are hermetically sealed off from the public.

It appears that states are careening down the greased up slope at the bottom of which they’ll find Dystopia watched over by the gimlet eyes of debauched Big Brother.

*No one is discriminated against based on their heterosexuality because objectively all humans are heterosexual. Their bodies are designed for hetero-sex and they reproduce heterosexually. The term “sexual orientation” in law actually refers only to subjective homoerotic feelings and volitional homoerotic acts, which means the legal door is open to add other conditions constituted by subjective feelings and volitional acts to anti-discrimination laws and policies.