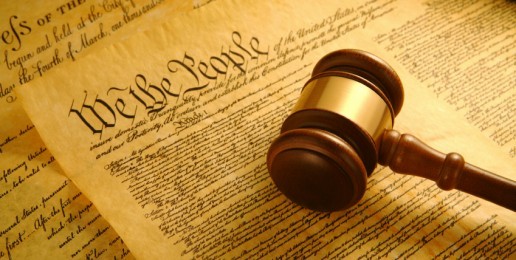 The German teacher in whose class this took place accused Dakota of “possible bullying” and wrote that the student’s comments should not be expressed in public school, even though the class discussion was on religion in Germany and another student had asked a question about homosexuality. How can the expression of a moral position about behavior, even a negative moral position, constitute bullying or even “possible bullying”?

According to student complaints, this teacher frequently discusses homosexuality. Apparently to this presumptuous teacher only conservative comments should be banned, and only liberal views are protected by the First Amendment.

Liberty Counsel, who is representing Dakota, has been successful in persuading the school to rescind the two-day suspension, and they’re working to ensure his formal record is clear.

But Christians should not be expecting organizations like Liberty Counsel, Alliance Defense Fund, and the Thomas More Society to do all the heavy cultural lifting. We need to actively and courageously work to restore sound pedagogy in the public schools that our taxes help subsidize. There are several things that parents and all other taxpayers can do:

1. Push for school policy that prohibits presumptuous educators like the German teacher in Texas from expressing their personal moral or political views through their comments, their curricula, or visual symbols in the classroom.

2. Push for a law (or at minimum a school policy) like the one that’s being promoted in Massachusetts (Click Here), which requires all schools that “present, implement or maintain a program that involves human sexual education, human sexuality issues or alternative sexual behavior ” to “adopt and implement a written policy ensuring parental/guardian notification of such school programs and a description of their content …. All such school programs shall be offered only in clearly identified non-mandatory elective courses or activities in which parents or guardians may choose to enroll their children through written notification to the school, in a manner reasonably similar to other elective courses or activities offered by the school district.”

This law (or a similar school policy) would prevent students from being exposed to any resource or activity that mentions any of these sexuality issues unless their parents are notified and give explicit permission for their child to enroll in the class or be present during the activity.

3. In addition, this law states that “No public school teacher or administrator shall be required to participate in any such school programs that violate his religious beliefs.”

4. Push for school policy that ensures intellectual diversity or parity. Taxpayers should ask school boards to create policy that requires teachers to spend equal time on and present equivalent resources from all perspectives on controversial issues. So, for example if a teacher assigns The Laramie Project or an article from a magazine that affirms “transgenderism,” he should be required to assign essays, commentaries, or journal articles written by conservative scholars on the issue of homosexuality.

I recently wrote about the persecution that Christian author and apologist, Frank Turek, has experienced because of his beliefs about homosexuality. Please watch the entirety of this short video in which he identifies the group that bears significant blame for the loss of our religious liberty: Christians.

Recommended Bylaw Changes for Churches
b
a
x
r