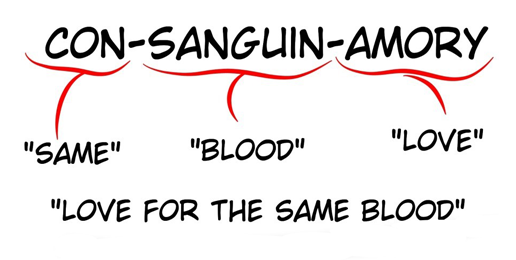 Many cultural critics argued that widespread approval of homoerotic acts and the legal revision of marriage to include non-marital relationships would inevitably lead to the erasure of other cultural taboos, specifically, taboos against plural relationships, consensual adult incest, and adult-minor sex, including pedophilia. Those critics who so warned were mocked by the scoffers who came following their own evil desires. “What rubes, paranoiacs, and bad thinkers,” screeched the scoffers. “Those are fearmongering, fallacious slippery slope, stupid arguments,” pontificated those with evil desires and strategies to match. But, once again, conservative critics were right.

The pro-poly movement is growing. News about “consensual non-monogamy” is everywhere including on mainstream news outlets. The American Psychological Association even has a task force composed of perverts to normalize this form of sexual deviance. Throuples and other sexually and numerically diverse unions are emerging from the dark fringes into the klieg lights that now highlight perversion.

Still in the dark fringy margins are the other two groups who, like polyamorists, have their own spanking new euphemistic names. Those who are in sexual relationships with close relatives have renamed incest “consanguinamory.” Following the logic of the “love is love” crowd, the blog “Full Marriage Equality” is dedicated to

“Advocating for the right of consenting adults to share and enjoy love, sex, residence, and marriage without limits on the gender, number, or relation of partners.”

Another blog that promotes incest is “Consanguinamory” whose creator, “Jane Doe,” describes her experience with and support for incest:

I am a woman in my early 30s, I used to be in a relationship with my dad on and off for a few years from when I was almost 20 up until I was in my late 20s. It wasn’t [Genetic Sexual Attraction], just straightforward incest, and it was the most deep, beautiful and loving relationship I’ve ever had. …

I clearly remember the confusion I felt when I first began to see him that way, I knew that society said that incest is bad, sick, disgusting and profoundly wrong, and yet the idea didn’t feel even remotely like that to me, it felt so right. Truth is, I fell in love with him and I chose to go with my heart and not my head. … I knew it wasn’t a crush or a phase, I’d had these feelings for a little while, but long enough to know the difference. I knew that what we had together was something real, and something very special. We were able to talk to each other for hours and never run out of things to say, and at other times just a glance could say a million words. We just understood each other so well, in a way it probably would have been more weird NOT to pursue the relationship, because it was the natural extension of our very strong family bond. …

A few years ago my dad broke off the relationship with me, he was afraid of us getting caught out, and he also still felt that it was somehow wrong for us to be together. Yet I loved him and he loved me, both in the romantic sense of the word and as family. I’ve tried non-incest relationships and they just don’t feel right to me, half the bond is missing… the family aspect of the bond. …

I still miss him so much and hope one day he has a change of heart, because even after so much time I am still in love with him. I miss everything from us going on the supermarket run to falling asleep in his arms at night. He just wasn’t able to get over the taboo against incest, so despite the obvious strength of our feelings he could not stay with me. I’ve tried so hard to just get on with my life, but it still hurts knowing that our relationship wasn’t just viable, it would have been thriving if that ridiculous taboo hadn’t been there in the first place. (emphasis added)

As I have written many times, getting the term “sexual orientation” added to anti-discrimination policies and laws was a stroke of genius by the libertines among us. Now all they need do is recast all the diverse manifestations of sexual perversion as sexual orientations, and, abracadabra, they become legally protected categories. And so, we see Jane Doe writing, “consanguinamory is an orientation, not a perversion.”

It’s not just incest that is going to be legalized. Oh no, incest is not at the bottom of the well of moral sewage. Pedophilia is comin’ to town soon.

The next step was to distinguish attraction to children from acts with children—an important distinction to be sure— but it’s temporary.

Recently, philosophy and ethics professor from the State University of New York at Fredonia and author of the book Pedophilia and Adult-Child Sex: A Philosophical Analysis, Stephen Kershnar, got in hot water for arguing that he finds no justification for a “threshold” age of child below which sexual engagement with adults would be wrong. For example, Kershnar argues that society’s belief that there is something “deeply wrong” about an adult man having sex with a consenting 12-year-old girl is both “wrong” and a “mistake.”

SUNY Fredonia Professor questions the widely held sociteal belief that it’s deeply wrong for an adult man to want to have sex year with a 12 year old girl. pic.twitter.com/qUAbSexFxp

To be clear, Kershnar is not arguing that sex between an adult and preteen is “wrong” and a “mistake.” He’s arguing that societal disapproval of such a sexual encounter is both wrong and a mistake.

From his sullied Ivory Tower, Kershnar continues with his morally untethered philosophical ruminations:

The notion that [sex is] wrong even with a one-year-old is not quite obvious to me.

It gets worse. Much worse: pic.twitter.com/OV8Zuk2qg1

Kershnar speculates that there are “evolutionary” advantages conferred on pedophilia, citing, among other things, studies showing that a “surprising number” of college age men show attraction to “prepubescent individuals, I assume, mostly girls.” What a cultural mess, Darwin created.

This is what happens when a society abandons God as the transcendent source of objective moral truth. Corrupt (and sometimes brilliant) minds devise intellectual rationalizations to justify virtually anything, buttressed by woefully unstable social “science” studies.

A Plea to Exit Public Schools ASAP
b
a
x
r