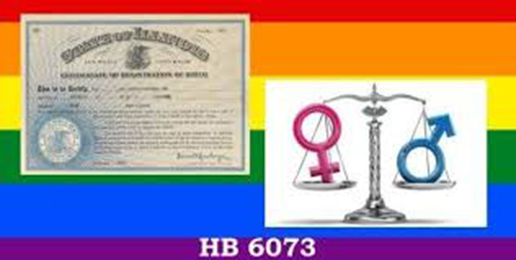 State Representative Greg Harris (D-Chicago) and his leftist accomplices, endlessly involved in trying to subvert truth and reality, have introduced the Birth Certificate Sex Designation bill (HB 6073) to make it easier for men and women who wish they were the opposite sex to obtain falsified birth certificates. Harris’ first chief co-sponsor was Kelly Cassidy (D-Chicago), both of whom are at the forefront of every legislative effort that serves the homosexual community of which they are part.

The absurdity and unscientific nature of the content of HB 6073 reveals the absurdity of the law it seeks to amend. This bill proposes to change a reference in the law from “sex change” to “change of sex designation.”

This bill changes the requirements for acquiring a new (and falsified) birth certificate. Currently, gender-dysphoric persons must present an “affidavit” from a “physician” confirming that the gender-dysphoric person has had “an operation” to try to conceal their actual sex. The proposed changes would nix the whole “affidavit” requirement, changing it to a bar far easier to climb over. If this bill passes, all that gender-dysphoric persons will need is a “declaration” from any “licensed medical or mental health professional who has treated or evaluated a person stating that the person has undergone treatment that is clinically appropriate for that individual for the purpose of gender transition, based on contemporary medical standards.”

And what kinds of treatments, inquiring minds might be asking, are included in the “clinically appropriate” toolbox for gender-dysphoric individuals? Will a gender-dysphoric person be required to have had surgery to tamper with their private parts? Nope. Will he (I am using the moribund universal “he”) be required to have received or currently be receiving cross-sex hormone treatments? Nope. Will he be required to be receiving psychological counseling for his gender-dysphoria? Nope. All that will be legally required in order to receive a de facto falsified birth certificate is a “declaration” from a licensed mental health professional who states that this person has received some treatment deemed appropriate by contemporary standards established by the dominant mental health organizations that are drenched in “progressive” socio-political dogma. That’s a bar so low and bendy that even a toddler could scramble over it.

Of course, not even surgical mutilation, hormone-blockers, cross-sex hormones, and cross-dressing can change a person’s sex at birth or in adulthood. And none of these anti-treatments (Treatments imply a disorder, and one’s sex is not a disorder) can change what these persons were designated at birth.

This is what our elected representatives waste their time and our taxes on: making it ever easier for gender-dysphoric persons to pretend they are the opposite sex.

Join us on April 8th in Orland Park for yet another IFI Forum, this time exploring The Case Against Common Core with Dr. Duke Pesta.  Click HERE for more information.