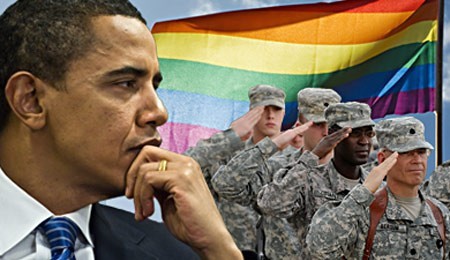 At midnight on September 20, 2011, the repeal of the policy referred to as “Don’t Ask Don’t Tell” (DADT) took effect. At 12:01 a.m. in Vermont, an active duty Navy lieutenant married his partner of eleven years, which means for the past eleven years, this Navy lieutenant has been knowingly violating military policy that prohibits homosexual activity.

How soon will it be before “married” homosexual partners start demanding spousal benefits, such as housing on military bases? Such benefits are currently prohibited by the Federal Defense of Marriage Act, which President Obama’s Department of Justice has said it will no longer defend.

Supporters of the repeal make the case that since what distinguishes soldiers is their unquestioning commitment to obey orders, this radical change in military policy will have no effect on troop morale or military readiness. Ironically, they simultaneously offer demagogic accounts of homosexual soldiers who have concealed their homosexuality, which constitutes deliberate deception and disobedience on the parts of soldiers who should never have enlisted in the military. Their primary act of enlisting constituted a violation of Article 125 of the Military Code of Justice and U.S. Code – Section 654 that strictly prohibits those who engage in homosexual acts or those who state that they are homosexual from serving in the military.

Despite what supporters of the repeal claim, military prohibitions against homosexuals serving in the military no more encourage deceit, than do laws prohibiting stealing encourage deceit. To claim that laws that prohibit certain behaviors encourage deceit is another way of saying people are always going to break laws. In this twisted logic, all laws encourage deceit because those who don’t want to abide by them willfully engage in deceit in order to do what they want without incurring the consequences.

The repeal of DADT came following biased media reporting of the findings of the Pentagon’s survey on military attitudes regarding the proposed repeal. The survey, which received only a 28 percent response rate, included not just soldiers but their wives and office personnel. The media largely ignored the fact that the survey did not include the question, “Should DADT be repealed?”

Homosexual activists have built their house of cards on the flawed comparison of homosexuality, which is constituted by subjective desire and volitional homosexual acts, to race. Homosexuals further assert that the idea of equality demands that society treat homosexual attraction and acts as morally equivalent to heterosexual attraction and acts. A just society committed to the principle of equality has no moral or constitutional obligation to treat all subjective feelings and volitional acts as morally equivalent.

The DADT repeal is one more example of sexual deviance trumping truth.