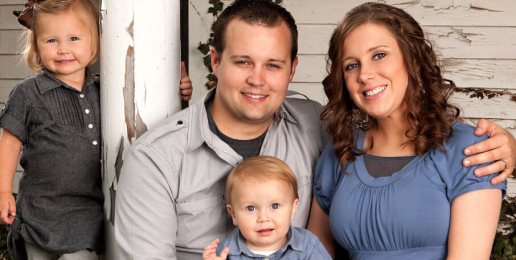 The Duggar controversy illuminates the truth that the cultural battle in which Christians are engaged is first and foremost a battle with principalities and powers:  “For we do not wrestle against flesh and blood, but against the rulers, against the authorities, against the cosmic powers over this present darkness, against the spiritual forces of evil in the heavenly places” (Eph. 6:12).

There is no other sensible explanation for the unseemly glee and unwarranted rage directed at this family by “progressives” who believe sodomy should be embraced as an identity. What, other than the influence of principalities and powers, can account for liberals taking aim at the Duggars—who  consistently demonstrate an otherworldly grace and gentleness—while rejoicing in Bruce Jenner’s tragic mental disorder and bodily mutilation and celebrating annual parades of perversion?

“Progressives” have provided the entire world with a graphic display (Warning: some obscene language) of ignorance and sickening schadenfreude.

Let’s take a little look-see at the mind-boggling claims that “progressives” make about the Duggars, claims which fuel their venomous assaults and expose their intellectual shallowness, moral vacuity, and unadulterated hypocrisy.

I understand why so many homosexuals enjoy the au courant sport of Duggar-hating. Homosexual activists have a vested personal interest in arguing that though the  biological implications of sexually complementary intercourse may be meaningful to individual couples, such implications have no inherent meaning or value relative to embodiment or human flourishing.

As to the environmental concerns of “progressives”—including Hollywood liberals, many of whom own huge swaths of property around the world and consume enormous amounts of natural resources to power their homes, planes, pools, and other accouterments of the lifestyles of the rich and famous: The world is not over-populated. There exists a problem with distribution of resources.

There is, however, a dearth of sexual sanity, grace, and wisdom, all of which the Duggars seem to amply possess. Who contributes more to a life-sustaining environment: The Jenner-Kardashian clan or the Duggars?

Claim 2. The Duggars are weird and cultish because they homeschool their kids, and the girls wear “prairie outfits.”

So, in our sordid carnival world, “prairie outfits” signify freakish repression, but a 65-year-old man in a lady’s satin corset represents female beauty and liberation? The Duggar girls in long skirts are weirder than Rihanna wearing completely—and I mean completely–transparent gowns to very public events?

If that’s the case, I’m all in for freakish prairie outfits. I would rather see my daughters in prairie outfits than have the whole world see them in the Empress’s new clothes. And I’d rather see my father lumber about in a suit of armor than sashay about in a chiffon peignoir. Yes, I’m just that transgressive—utterly liberated from the dictates of our socially disintegrated culture.

With regard to the homeschooling charge: it’s relevant to note that there are hundreds of liberal parents who homeschool their kids. The motivation for some is their view that public education fosters conformity over individualism. Some believe that public schools value uniformity over creativity. And some believe curricula are too test-driven. Those parents rarely if ever are criticized for weird cultishness.

No, it’s not the fact of homeschooling that generates all the foaming at the mouth we’ve seen in the past few weeks. It’s the Duggars’ reasons for homeschooling that drive homosexuals and their uber-cool allies to wax berserk and self-righteous.

The non-judgmental, tolerant disciples of diversity have judged that the desire to train up children to love God and theological orthodoxy is not merely counter-cultural and not merely weird, but twisted and evil.

Homosexual activists have all Christian institutions—including private schools, colleges, and universities—in their sights. And then they’ll come gunning for homeschools and airwaves. Before long, we will be Canada, or Germany where it is illegal to homeschool.

Deuteronomy 11:19 tells parents, “You shall teach [the words of the Lord] to your children, talking of them when you are sitting in your house, and when you are walking by the way, and when you lie down, and when you rise.” Increasing numbers of Christian parents believe they cannot fulfill this instruction if their children are in public schools that are often hostile to Christian beliefs  7 hours a day, 5 days a week, 186 days a year, for 13-22 formative years.

Interestingly, anti-Christian bigots and sexual pagans seek the same thing Christian parents like the Duggars seek. They seek to shape the minds and hearts of children. The difference is anti-Christian bigots and sexual pagans want to train up other people’s children in the way they believe they should go, which is why they are so desperate to mock, condemn, and ultimately eradicate the homeschool movement.

Claim 3. (This one is a real howler and reveals just how bereft of moral reasoning many “progressives” are.) The Duggars are hypocrites because they espouse family values while both experiencing sin in their own family and concealing a serious sin committed by a minor child from the prying eyes and vengeful, darkened, judgmental hearts of strangers.

Seriously, that’s what they say—well, I may have tinkered with that last part a bit.

Does the Left understand what hypocrisy means? Hypocrisy is “The practice of professing beliefs, feelings, or virtues that one does not hold or possess; insincerity.”

Let’s look at some real life incidents to try to achieve some clarity on hypocrisy:

Of course, we don’t know if these individuals are hypocrites or if they simply failed to live up to their true beliefs.

The fact that a Duggar child, while a minor, committed a serious sexual sin and the Duggars express the belief that homoerotic activity is immoral does not even come close to hypocrisy.

I wonder, does every homosexual whose minor child commits a moral offense or breaks the law lose the ethical right to express moral propositions? If a homosexual’s minor child steals something, is the homosexual parent engaging in hypocrisy if he expresses his sincerely-held belief that theft is immoral?

Would these parents forever be prohibited from saying that disapproval of homosexuality is immoral, bigoted, and hateful, because those claims sound downright judgmental to me. And surely intellectual consistency would suggest that anyone who expresses those moral judgments must think themselves morally superior to others.

But the Duggars have never claimed the mantle of human behavioral perfection. It is homosexuals who claim that whenever theologically orthodox Christians express disapproval of homosexuality, said Christians are claiming to be morally superior.

Oddly, when homosexuals express their innumerable moral propositions, they seem unfazed by any fear that they are claiming moral superiority or passing judgment on others. Nor do they keep their traps shut about what constitutes right or wrong behavior when a child of theirs commits a sin—which I can only assume happens on occasion.

Perhaps in between catapulting boulders at the Duggars, self-righteous, judgmental “progressives” could share whether they are absolutely certain they would take a minor child of theirs to the authorities—like the Duggars did—if they learned their child had inappropriately touched siblings in a non-penetrative way that the victims hadn’t noticed.

The ultimate reason these incidents came to light was not that some insider or journalist exposed them. Rather, it was that by age 14, Josh Duggar’s conscience was sufficiently formed to recognize that the feelings he harbored while engaging in inappropriate touching of which even his victims were unaware were very wrong.

Homosexuals and their allies in the war to enhance the moral status of sodomy fancy themselves free thinkers, liberated from the tyranny of “social construction” and the oppression of “THE MAN.” They rarely seem troubled by the fact that they are “THE MAN,” shaped by culturally regnant sexuality dogma. They now wield their entrenched power like a cudgel to impose their assumptions with a fearsome dictatorial power that makes the 1950’s look like the revolutionary summer of love and would color former Alabama governor George Wallace an enviable shade of green.

Your support of our work and ministry is always much needed and greatly appreciated. Your promotion of our emails on Facebook, Twitter, your own email network, and prayer for financial support is a major part of our ability to be a strong voice for the pro-life, pro-marriage and pro-family message here in the Land of Lincoln.

AFA to Duggars: We’ve Got Your Back