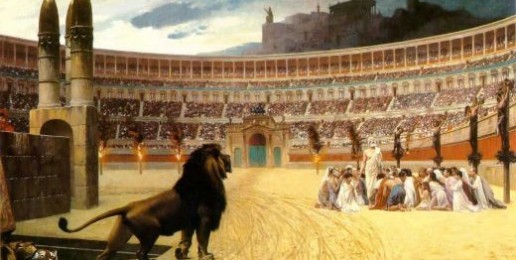 Homosexuality and the Persecution of the Church
Written By Laurie Higgins   |   07.11.13
PRINT

Yesterday, we re-posted an important piece by theologian and pastor Peter Leithart on the necessity of Christian commitment to truth on the issue of sexuality, particularly homosexuality, an issue that will lead ineluctably to the persecution of the church.

Today, we urge readers to watch this video in which British pastor Sam Allberry discusses his new book  about homosexuality and the church, a discussion made all the more compelling because he shares his own struggle with same-sex attraction.

In his book Allberry echoes Leithart’s message about self-denial, something of which many Christians seem to have lost sight.  Allberry, like Leithart, affirms that in order to be followers of Christ, all of us are called to deny ourselves:

…what Jesus calls me to do is exactly what he calls anyone to do….:“Then he called the crowd to him along with his disciples and said: ‘Whoever wants to be my disciple must deny themselves and take up their cross and follow me’” (Mark 8:34).

It is the same for us all—“whoever.” I am to deny myself, take up my cross and follow him. Every Christian is called to costly sacrifice. Denying yourself does not mean tweaking your behaviour here and there. It is saying “No” to your deepest sense of who you are, for the sake of Christ. To take up a cross is to declare your life (as you have known it) forfeit. It is laying down your life for the very reason that your life, it turns out, is not yours at all. It belongs to Jesus. He made it. And through his death he has bought it.

Ever since I have been open about my own experiences of homosexuality, a number of Christians have said something like this: “the gospel must be harder for you than it is for me”, as though I have more to give up than they do. But that fact is that the gospel demands everything of all of us. If someone thinks the gospel has somehow slotted into their life quite easily, without causing any major adjustments to their lifestyle or aspirations, it is likely that they have not really started following Jesus at all.

This self-denial will be painful and costly. It means, among many other things, that Christians who experience same-sex attraction must be willing to deny those particular feelings, and that all Christians must be willing to endure the costs of discipleship as they bear witness to truth in a hostile culture. Leithart calls for Christians to “continue to teach Christian sexual ethics without compromise or apology” warning, however, that “There will be a cost for speaking the truth, a cost in reputation, opportunity, and funds if not in freedoms.”

Leithart warns too of the broader implications for the church, of which we can already discern the darkening outlines:

Many churches have already capitulated to the Zeitgeist, and many others will. Some Christians and some churches won’t be up to the challenge. For those who heed Paul’s admonition not to be conformed to the pattern of this world, things are going to get sticky. But we are servants of God. He opens our ears to hear, and he gives us tongues to speak truth. If that means we are insulted and marginalized, if it means we yield our back to the smiters and our face to those who spit on us, so be it.

This will force a major adjustment in conservative Christian stance toward America. We’ve fooled ourselves for decades into believing that Christian America was derailed recently and by a small elite. It’s tough medicine to realize that principles inimical to traditional Christian morals are now deeply embedded in our laws, institutions and culture. The only America that actually exists is one in which “marriage” includes same-sex couples and women have a Constitutional right to kill their babies. To be faithful, Christian witness must be witness against America.

God has his winnowing fork in his hand, and he’s ready to use it. There’s likely to be a lot of chaff, blown away like mist. But there will be a harvest. We’re being sent into an oven, but Jesus will crush the grain of the harvest so that, baked in the fire of the Spirit, it will become bread for the life of the world.

Embedded in this portentous warning, however, is the hope that is found in Christ, a hope that is flush with the glorious blessings that Sam Allberry describes:

And just as the cost is the same for all of us, so too are the blessings. Over the past few years of wrestling with this issue, this has become one of my favourite sayings of Jesus: “Come to me, all who are weary and burdened, and I will give you rest” (Matt. 11:28).