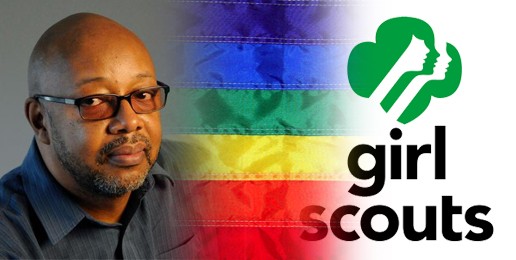 Pitts feels “indebted to [CEO Megan Ferland] for her…inspiring moral courage.” This act of “moral courage” will likely be celebrated by lesbian Krista Kokjohn-Poehler who is the “Chief Girl Experience Officer” (yes, that’s really her title) of the Girl Scouts of America.

Even the concept of courage has been perverted to serve perversion and confusion.

A courageous act entails at least the possibility of danger or suffering. It takes no courage to be carried along downstream in our deviance-swirling torrential current. Hollywood and the liberal mainstream press worship at the feet of every Tom, Dick, or Caitlyn who flounces about announcing their strange sexual proclivities. Even formerly conservative press outlets are filled with pundits who are ensconced firmly in the malodorous maws of “progressive” sexuality dogma. Ferland’s decision to reject the donation was cost-free. She may have lost the donation, but I can already hear the clink, clink of coins flooding the Western Washington GSA’s coffers right now from LGBTQQIAAP activists.

Imagine, however, if Ferland had accepted the donation with the stipulation that the Western Washington Girl Scouts remain single sex. And now imagine that some LGBT activists whose jackboots the press licks got wind of the story. That, my friends, would be a very dangerous situation for Ferland.

But  I’m confused. I thought genetic (and therefore ontological) immutability was the central justification for the normalization of homosexuality?

According to “progressives,” homosexuality—for which there is zero evidence of genetic causation—is immutable, but sex—which is proven to be genetically determined—is mutable and can be changed via a new wardrobe, a few (or many) surgical snips, oh, and compulsory participation of the entire culture in an elaborate performance piece of subversive anti-art—a toxic retelling of the “Emperor’s New Clothes.” (Now there’s a story that should be taught in more schools: It warns of the danger of both pride and collective denial of reality.)

The Left has created a set of assumptions to justify the obliteration of the objective categories of male and female or to compel society to subordinate them to desire. “Progressives” have socially constructed a new categorical term, “gender identity,” to impute ontological and moral weight to what is, in reality, the aggregate of disordered thoughts and desires. In order to obliterate the meaning and importance of the objective categories of male and female, the Left had to construct an opposing set of ideas and then impose it on society through a host of fallacious arguments, social intimidation, and political chicanery.

What to do, what to do with the manifold incoherencies that emerge from the Left’s assumptions concocted to render desire preeminent over all other social and moral considerations? Be courageous.

What takes real courage (i.e., a willingness to suffer in the service of truth) is to say that the categories of male and female are objective, immutable, and good and that the term “gender identity” is a social construct invented to promote confusion as truth and elevate desire over reality.

What gender-confused children and adults need and deserve is genuine love, which is inseparable from truth. They need affection, community, and consistent affirmation of the good of their sex. It serves neither love nor truth to facilitate confusion.

Pitts cunningly appeals to equality by suggesting that opposition to gender-confused people using opposite-sex restrooms is tantamount to “segregating them…behind barbed wire of social rejection.” A commitment to equality demands that society treat like things alike. It does not demand that society treat different things as if they were the same. Bruce Jenner did not transform into a woman—as Pitts falsely claimed he did—and boys can never be girls. Such a truth is written even more firmly into the DNA of humans than inclusivity is written into the DNA of the former Girl Scouts of America.