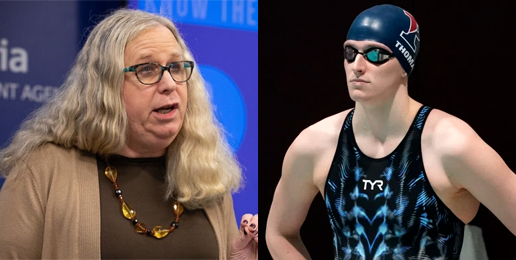 In the past three days, Twitter has suspended the accounts of the well-known satirical website Babylon Bee and of Division I swimmer Reka Gyorgy. What Gyorgy and Babylon Bee share in common is a willingness to criticize the alchemical superstitions of the “trans” cult.

Babylon Bee mocked USA Today for giving the Woman of the Year award to assistant secretary of health at the Department of Health and Human Services, Dr. Richard Leland Levine, alias “Rachel” Levine, who is a man. In response to USA Today’s insulting award, Babylon Bee tweeted that it had awarded Levine its Man of the Year award. Twitter suspended Babylon Bee’s account for alleged “hateful conduct,” a suspension that will be lifted only when Babylon Bee deletes the tweet.

And the left claims they hate censorship.

Former Olympic swimmer and current Virginia Tech swimmer, Reka Gyorgy sent a letter to the NCAA and tweeted about the injustice of having to compete against a biological male—also known as a man—which cost Gyorgy a chance to swim the 500 freestyle in the NCAA finals. Gyorgy tweeted,

My finals spot was stolen by Lia Thomas, who is a biological male. Until we all refuse to compete nothing will change. Thanks for all the support retweets and follows. I won’t stop fighting.

Christians should stand publicly with those who are leading the way on this transgressive nonsense, like Reka Gyorgy, Babylon Bee, and this father and mother of a female NCAA swimmer:

Princeton University law professor Robert P. George recently urged those who reject the assumptions on which the “trans” ideology is built to live with integrity:

When you’re pressed to state or list your pronouns, you’re being asked to sign up for a practice with certain ideological presuppositions. It is not, and cannot be, a simple matter of politesse. If you believe in the ideology, and don’t mind being pressed to express your loyalty to its tenets, then, by all means, be my guest. But if you don’t believe it, or if you believe it but object as a matter of principle to being pressured to make public affirmations of beliefs, then stand by your principles and don’t sign onto the practice. The key things, either way, are to recognize what’s going on and have the integrity—and courage—to stick to your principles.

If theologically orthodox Christians believe their beliefs are true, then they should act like it.

The courage of these parents raises the question, why aren’t all Christian parents of high school and collegiate athletes saying publicly what these parents said?

While Christians claim to admire men and women who have stood steadfastly and suffered grievously for the faith even to the point of martyrdom, many Christians teach their children by word and deed to flee from even the mildest form of persecution. Say and do nothing that will tarnish a reputation, cost a job promotion, or lose a friend.

According to the leftist, “whose truth?” crowd, there is no objective truth—oh, except every moral belief they hold. THOSE beliefs—the source of which is their reservoir of deep feelings—are absolute, objective, transcendent, eternal moral truths, disagreement with which leftists believe should cost you your reputation, your ability to earn a living, and friendships.

In a sermon series on Romans and preached over fifty years ago, Pastor Martyn Lloyd-Jones identified the second reason for Christian silence in the face of evil, a problem that has only grown since he preached about it:

Christian people are mistaking natural qualities, niceness, a cultural veneer or politeness, for true Christian grace. … How often today is affability mistaken for saintliness! “What a gracious man he is,” they say. What they really mean is this: he never criticizes, and he agrees with everybody and everything. I know of nothing more dangerous than that. … Affability is not saintliness. … We are now judging only by our own subjective feelings, by our impressions and reactions. Is there anything so dangerous?

Real love, as opposed to some saccharine, ever-affirming substitute—requires first knowing what is true.

The danger of judging only by our own subjective feelings is nowhere more obvious than in the “trans” cult. “Trans”-activists in thrall to the delusional and dangerous idea that authentic identity is constituted solely by each person’s subjective feelings are destroying lives and necessary institutions and conventions.

Will Thomas, alias “Lia,” has likely been convinced by the “trans” cult that what he’s doing is brave and important. He’s likely been convinced that he will go down in history as a much beloved hero—the Rosa Parks of the “trans rights” movement. Someone should tell Thomas that “trans” cultists don’t care about him. They don’t care about anyone or anything other than their narcissistic, solipsistic, perverse desires.

They don’t care that Thomas will lose most of his swimming buddies because men know that he is stealing places and records from women.

They don’t care about the young women who will not want to date a cross-dressing man.

They don’t care about all the young women who after spending a decade swimming four hours a day all year long, had this year of collegiate swimming ruined.

They don’t care about the feelings of all the women whose locker rooms were invaded by a man who openly undressed in front of them this swim season.

And “trans”-cultists certainly don’t care about Will Thomas’ eternal life.

While “authenticity” for Thomas and Levine centers on their disordered subjective desires and their rejection of material reality, for other people authenticity centers on acceptance of biological reality and biblical truth—including the importance of not bearing false witness. For those people, denying God’s creation of males and females and bearing false witness by using false pronouns are acts of rebellion against God. For those people, such dishonorable acts are profoundly harmful and unloving acts.

Those who claim to revere diversity, equity, inclusivity, tolerance, freedom, and authenticity should be first in line to defend the right of conservative Christians to live authentically Christian lives.

The “trans”-gender house is built on a sandy foundation of faulty assumptions, delusions, biased pseudoscience, and bald-faced lies, all of which are propped up by buckets of ducats from the likes of the Pritzker family, the Stryker family, Tim Gill, and “Martine” Rothblatt and by the suppression of speech. It’s an ugly evil project that is destroying bodies, minds, souls, families, churches, schools, the practice of medicine, institutions related to lawmaking, speech rights, and religious liberty. Who could possibly be behind a project of such scope and enormity?