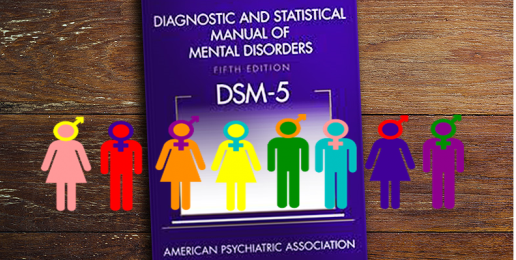 America is suddenly the upside down kingdom: our culture daily calls “evil good, and good evil.”

One symptom of our values turned on their heads is the bathroom skirmish, which has become a full-scale battle. Many pundits snort and wave it off as passing nonsense. After all, what’s the big deal if a man wants to use the ladies room or a genetic female wants to use the men’s room?

And why is this occurring?

Politically correct terms are being forced on society in a tsunami of messaging from the mainstream media, the ACLU, the Southern Poverty Law Center, The Human Rights Campaign, Hollywood and others. We simply must move forward, we’re told, and accept “transgenderism.”

Interesting that the very arguments touted by the left concerning God and Christianity, “You Christians just rely on faith and feelings, not science!” are now the cornerstone of gender dysphoria.

What is “gender dysphoria”?

Gender dysphoria is a condition where a person experiences discomfort or distress because there’s a mismatch between their biological sex and gender identity. It’s sometimes known as gender identity disorder (GID), gender incongruence or transgenderism.

Here are the criteria for gender dysphoria:

A. A marked incongruence between one’s experienced/expressed gender and assigned gender, of at least 6 months’ duration, as manifested by at least six of the following (one of which must be Criterion A1):

3. A strong preference for cross-gender roles in make believe play or fantasy play.

4. A strong preference for the toys, games, or activities stereotypically used or engaged in by the other gender.

5. A strong preference for playmates of the other gender.

8. A strong desire for the primary and/or secondary sex characteristics that match one’s experienced gender.

B. The condition is associated with clinically significant distress or impairment in social, school, or other important areas of functioning.

3.) A person’s belief that he or she is something they are not is, at best, a sign of confused thinking.

4.) Puberty is not a disease and puberty-blocking hormones can be dangerous.

6.) Children who use puberty blockers to impersonate the opposite sex will require cross-sex hormones in late adolescence. Cross-sex hormones (testosterone and estrogen) are associated with dangerous health risks including but not limited to high blood pressure, blood clots, stroke and cancer.

7.) Rates of suicide are twenty times greater among adults who use cross-sex hormones and undergo sex reassignment surgery, even in Sweden which is among the most LGBQT-affirming countries.

8.) Conditioning children into believing that a lifetime of chemical and surgical impersonation of the opposite sex is normal and healthful is child abuse.

3.) A person’s belief that he or she is something they are not is, at best, a sign of confused thinking. When an otherwise healthy biological boy believes he is a girl, or an otherwise healthy biological girl believes she is a boy, an objective psychological problem exists that lies in the mind not the body, and it should be treated as such. These children suffer from gender dysphoria. Gender dysphoria (GD), formerly listed as Gender Identity Disorder (GID), is a recognized mental disorder in the most recent edition of the Diagnostic and Statistical Manual of the American Psychiatric Association (DSM-V).The psychodynamic and social learning theories of GD/GID have never been disproved [emphasis added].

Gender dysphoria is another symptom of a culture that has traded transcendent truth for the dogma of secular humanism, wherein man is the center of the universe and “every man did that which was right in his own eyes.” Cut loose from the moorings of God’s righteous and life-affirming truth it’s no wonder our culture is adrift.

Common sense should tell us that any ideology that calls truth a lie and lies truth and which often leads its believers to suicide should be condemned.

Gender-dysphoric boys and girls, men and women, have biological sexes, immutably written in their DNA. Denying that biological fact is both physically and spiritually harmful. We should treat those with gender dysphoria with compassion and God’s grace. But acquiescing to a culture of lies helps no one–not the culture and certainly not the confused individuals seeking help and peace.

We would do well to remember that truth alone, borne out of love, is healing. The Great Physician, the one who made us male and female, also instructed, “And you will know the truth, and the truth will set you free” (John 8:32).

Tami Jackson
Tami Jackson is a life-long Conservative embedded in her once red, native state of Oregon, the granddaughter of (legal) Norwegian immigrants, and the former Executive Editor at BarbWire.com. Tami is an Evangelical Christian and Second Amendment aficionado. She is also Social Media/Content/Marketing for Robar Companies, and the host of The Tami Jackson Show.
Twitter:  @tamij  ...
Full bio and more from Tami Jackson
b
a
x
r